There’s no such thing as a perfect game. That might be contentious but it’s true, every game is going to have little pieces that don’t quite fit at the very least. I only mention this because Dead Cells might be about as close to the perfect platformer as you can get. The key is in the controls, nothing controls quite as good as Dead Cells and nothing looks quite so good in action, either. If the structure built around it was faulty we might not even be here talking about it, but it’s a very compelling maze of secrets and challenges that has more than enough reasons to keep you splattering yourself against the castle walls. 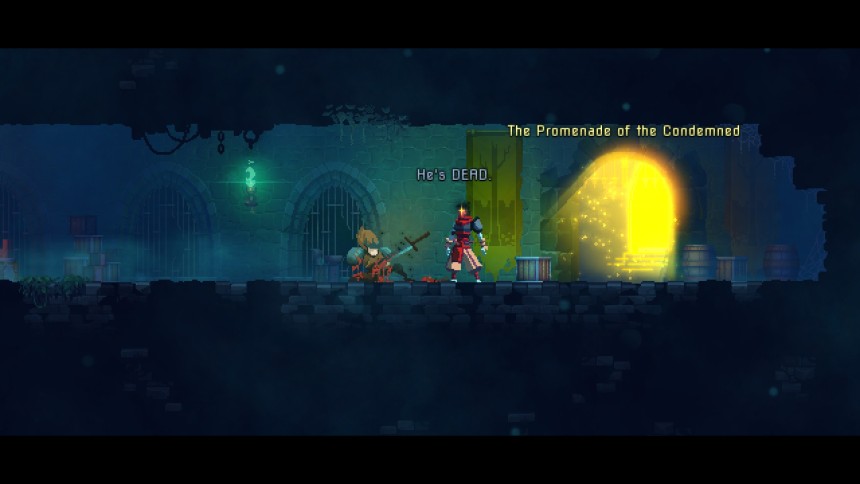 You’re… um… I’m going to be honest, I’m not really sure what you are. You start the game as some gob of goo that claims ownership of a decapitated corpse and gives it a new shiny, smoky head. This happens in the bowels of an ever-shifting castle on a remote island, so I presume your goal is to escape its surly bonds. There’s a mess of unfriendly folks in your way, though, so it’s going to take a lot of hacking, slashing, grinding (the meaty kind), and exploding to make it out. And to do that, you’re going to want to find the mess of item blueprints that unlock new weapons and upgrades to aid you.

Each level of the castle is laid out like a small section of a Castlevania-style area, with twisting passages and numerous exits. Some of them require special powers to reach like teleportation and wall jumping, while others will see you recovering keys to unlock their paths. Areas are not equal, with the more remote ones being significantly harder but offering better rewards. You’ll have to contend with some interesting gimmicks too, like consuming darkness or poison cisterns. All roads lead to the game’s varied and challenging bosses, who form significant (but not the only) threats to your life.

A roguelike metroidvania is not a new idea, Rogue Legacy did it years ago. But classic though it is, it cannot hope to match the sheer majesty of mobility and combat in Dead Cells. Your ambling corpse is surprisingly agile, with a swift clip, lengthy roll, and innate double-jump. This mobility is key to avoiding the many attacks of your foes and hacking them to pieces. Attacks in the game are extremely fluid and have excellent feedback, and when your enemies strike you get brief but clear indications which allow you to roll or counter. You’ve also got slots for two reusable items like elemental grenades or traps like sawblades or turrets which can do the work for you, to incredible effect if you build your character for them.

Several supporting systems help keep you in the fight as well. Enemies can be staggered by inflicting enough damage over a short period, encouraging you to get in their faces and rip them off. The rally system further bolsters the bold approach, as doing damage can restore lost health if you lay into foes soon enough after taking hits. And your stat upgrades provide brief but significant boosts to your attack based on certain combat factors. The combination of fluid movement and advantages for aggressors makes Dead Cells an incredibly fast-paced game, one where you are encouraged and rewarded for becoming a raging avatar of death and cuisinarting through your foes.

You’ll need excellent reflexes to see it through though, because Dead Cells is hard. It’s not unfairly or unreasonably hard, but some encounters in later areas will kill you stone dead until you learn how to handle them. Enemies can be fast, aggressive, and relentless, giving even more reason for you to beat them to the punch but making it harder to pull off that kind of brutality. The stat system allows you to focus upgrades on weapon attacks, skill attacks, or survival, but with diminishing returns so you have to weigh making your blades that little bit deadlier against giving yourself more health to work with. Your weapon selections will be key as well, and unlocking as many new ones as possible is important for finding gear that suits your playstyle. They’re surprisingly varied, with unique animations for each and some major differences between swords, spears, daggers, and so on.

As you fight you’ll earn cells which are spent between levels to unlock new permanent upgrades. You’ll need blueprints to get upgrades to buy in the first place, and those come from random drops, secret areas, or time-locked doors. In another twist on the formula, most levels have doors that only open if you reach them from the start of the game under a target time. These are a real challenge to reach, as rushing through the game can cost you some valuable exploration and additional items. The game does seem balanced around allowing you to do either and still chug along just fine though, and the meta-progression helps make even the worst runs gratifying.

And somehow, there’s yet more to flesh out this powerful formula. Levels are rife with side rooms that contain tantalizing plot threads and small rewards, and time even stops in these areas to allow you to drink in the experience. If you tire of unlocking new tools, you can pump your cells into permanent upgrades to the quality of your drops. The mutation system allows you to pick powerful perks to enhance your build, and items can be reforged during runs for new modifiers. There are higher difficulties once you beat the game with challenging new restrictions, a daily run mode that operates under a totally different point system, and even a streamer-specific mode that lets your audience play along. There’s no question that a ridiculous amount of effort went into making this game what it is, much of it coming from heeding player feedback.

Look, if you like platformers there’s really no reason not to get Dead Cells. It looks fantastic, sounds even better, and plays at least as good as your favorite brawling platformer. Seeing all there is to see will easily take dozens of hours, depending on how fast you come to grips with the challenge. In truth I can’t think of any other platformer that felt this good to play, just to run and jump and fight in, and that alone should be huge. Dead Cells has set a new gold standard for the genre, one that will be tough to match as it continues to draw players in with its gratifying action and wealth of secrets.