It’s hard to find good Lovecraftian games, despite the popularity of cosmic horror. All too often a title will seize on the monsters or the twists of eldritch horror without capturing the despair and madness of the unknowable. But then there are magical exceptions like Deathstate, games that purposefully eschew the despair and madness and use the monsters and twists to make a completely awesome shoot-em-up. The cosmic horror elements really just serve as a jumping-off point for an entire universe of planar strongholds, enchanted blades, powerful tomes, and thousands of soul-sucking monsters to blast. 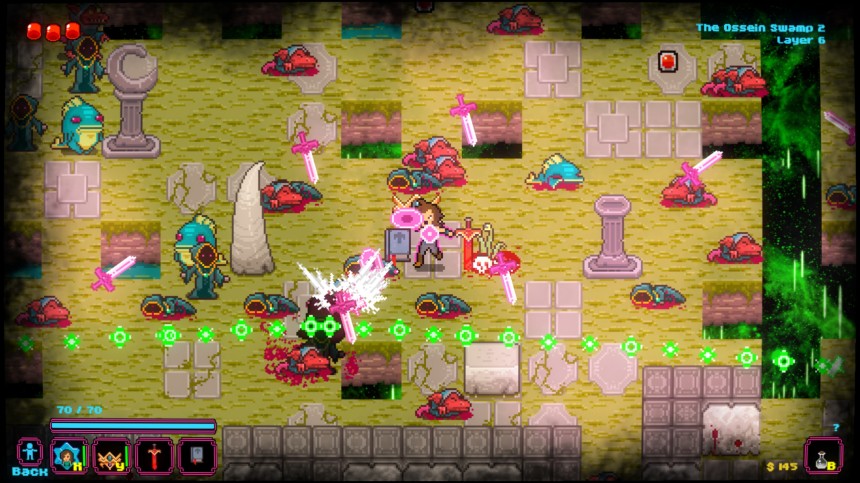 Good Professor Elinberg claimed to be on the verge of a monumental discovery in astral projection, but no one took him seriously until he up and vanished. A motley crew of scholars, drifters, and stranger beings have taken up residence in his previous residence to follow his trail into the unknown. By entering the Deathstate (roll credits), these explorers can enter realms of madness, populated by impossible beings guarding secrets of cosmic portend. Armed with enchanted weapons and artifacts, you will guide them to the final destination of the Professor and the terrible discoveries he has made.

In other words, you need to magic your way through fifteen levels of dimensional hellscapes to reach the thing the Prof sought. Each level is a vast maze of walls, channels, pits, and statuary separating you from the exit portal. Also standing in your way are several hundred enemies, everything from skeletons to star children to succubi to sarcophagi. You’ll need sustained fire from your magical arsenal to bring them down but can augment your spellcasting with weapons, grimoires, artifacts, potions, and organs dug from the entrails of the cosmic horrors themselves. Most of those can be found in chests or bought from strange mummified merchants to be swapped around but the organs do indeed come from dead enemies and are permanent additions (and stat boosts) to your increasingly confounding biology. 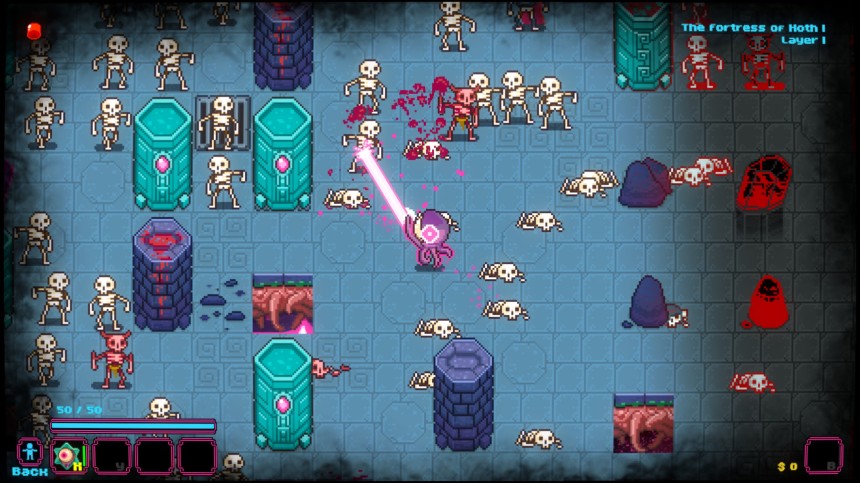 The actual combat is one of the most unique aspects of Deathstate. It purports to be a single-stick shooter, which means all you need to worry about is moving. Your magic auto-targets nearby enemies using its own priority system that is somehow plenty smart enough to never get you killed. I’m not sure why exactly it works so well because I think it’s just targeting whatever’s closest, but in dozens of runs I’ve never once felt like I was cheated out of life. It helps that your upgrades can turn your pew-pew magic into death beams, gouts of flame, homing missiles, or flying psychic battleaxes as well, and while there may be moments where you feel you’re not killing fast enough they pass very, very quickly.

Deathstate smartly gives you literal hordes of monsters to melt with your fantastic cosmic powers, and your high rate of fire means you’ll chew through most of them like candy. That’s not to say they’re not a threat, of course. There are more than enough vicious creatures to make your life hell even as you mow them down. Your foes generally fire off tons of slow-moving shots, making this one very much a bullet hell game where you can fortunately focus more on dodging than aiming. You have a dash move that makes you very briefly immune to attack that you’ll need to cut through denser patterns, and you might also find some trinkets or other items that can negate attacks from time to time. 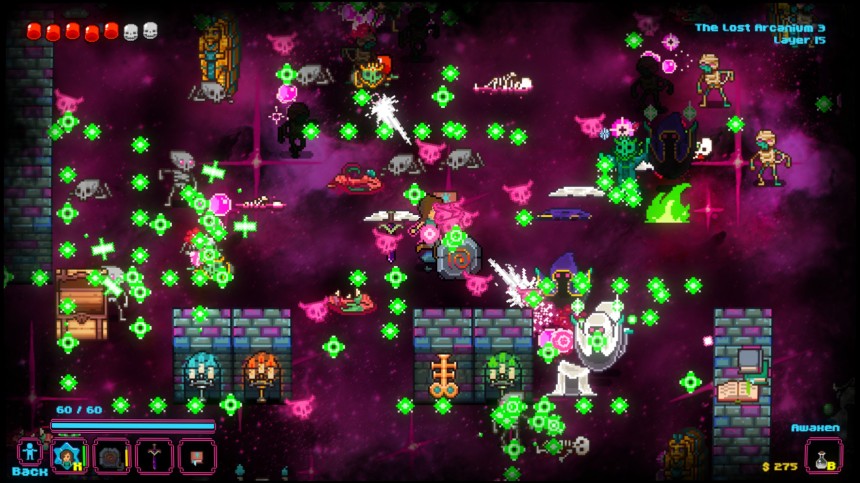 Levels are assembled in sets of four under a specific map type, and maps are paired so every time you run through the game you’ve got a 50/50 chance of doing the last one over again or traveling to the alternate one. This helps keep runs fresh, as enemies are unique to their map and the two maps in a pairing often play completely differently. Once you beat the game you’ll find shrines to desecrate that raise the overall difficulty of the game, generally making more enemy shots appear and fewer pickups drop. While the base game isn’t too challenging the different desecration levels ramp up quickly, leaving you plenty of room to improve your dodging and magicking.

The real draw here though are the dozen playable characters and hundreds of unlockable items and enemies to find in your journeys. For a game with straight-forward levels and challenges Deathstate hides a surprising number of secrets, some I’m still struggling to uncover nearly a dozen hours in. The clean pixel art is perfectly fitting and the chiptune soundtrack is superb, drawing on inspiration like old DOOM midi classics to provide an ominous, understated backdrop to the chaos. If anything the simple mechanics can start to lull you into too great a comfort, only for the roguelike difficulty to come slap you back down. It’s ultimately a chill game and a terribly fun one at that, especially since you can play it exactly how you want. Even those unsure of the roguelike genre would be well-served by giving this one a try. 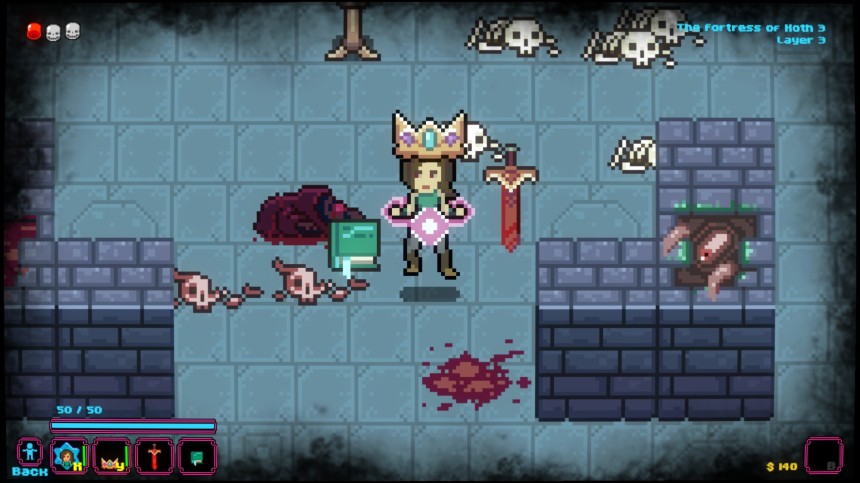