A lot of games these days try to get by on airs of mystery, surely owing at least a small debt to the inscrutable titles of the ancient consoles. They vary in what they obscure and how much they obscure it, but few reach as far beyond the veil as Nongünz. Designed with no dialogue, no text, no explanations, and seemingly no narrative, you are left to puzzle out not only the mechanics of the game but the purposes for their existence, and in some cases puzzle out their very existence itself. Obviously it’s not an easy game to get into, but the solid shooting and poignant atmosphere should provide the impetus you need to at least attempt understanding.

You are a headless skeleton in a graveyard. There is an enormous temple of skulls and guns, and an enormous-er tower of vile creatures and strange treasures. You enter the tower to battle creatures with your guns, secure treasure, and possibly defeat the horrifying bosses at the end of every floor. Should you fail, you lose everything and are deposited back beneath the graveyard to re-emerge and begin the cycle anew. Some of your actions in the tower will change elements of the graveyard, and the interplay between the two will provide you new advantages and answers in your ill-defined quest.

That’s about as specific as I can get into the plot without spoiling it, and Nongünz exists to have its mysteries unraveled. Instead we can focus on the mechanics, which are important if you intend to whittle away at the secrets offered here. It’s very much a platformer, one with deliberate options and limitations to make you feel both mobile and vulnerable at any give moment. Your boneguy has some helpful tools like a dodge roll and a slide that lets you shoot up, important because you can actually jump again at the end of a roll even in midair and you can’t normally aim your guns anywhere but right and left. Indeed, enemies are designed to tax your reflexes with aggressive movements and shots despite these tools at your disposal, and you are rewarded with many more points for comboing kills together to further test your skills. 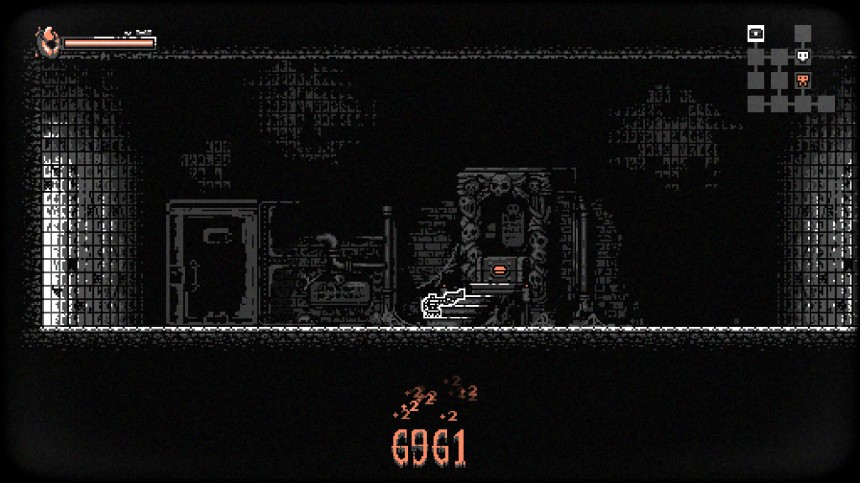 The jumping and shooting are tight but unremarkable, leaving the rest of the game’s unexplained systems to carry the burden of hooking your attention. There are no shortage of them either, from the sixteen nameless stats in your pause menu to the paperclips and paper crowns and pelvic bones you find as items to the coffins you can shove things into in the graveyard. Everything has a purpose but it won’t be apparent when you notice something, and you still won’t be sure after you start fiddling with it. Even the different skulls you find, key items that grant limited new abilities, aren’t always clear on how they operate.

But it’s still the mystery that keeps me coming back to Nongünz. It’s an aggressively obtuse game but it’s actually hiding something of substance. That’ll be apparent the first time you figure out how to quit the game, because what you think is going to happen is very conspicuously not going to happen. The clues that begin to break through as you dig deeper are tantalizing, but I must warn that they’re counter-balanced by something of a grind. I can’t say I know the best way through the game but the strategy I’ve settled on involves a lot of half-runs for items and points before challenging the bosses, and it can grate after awhile. 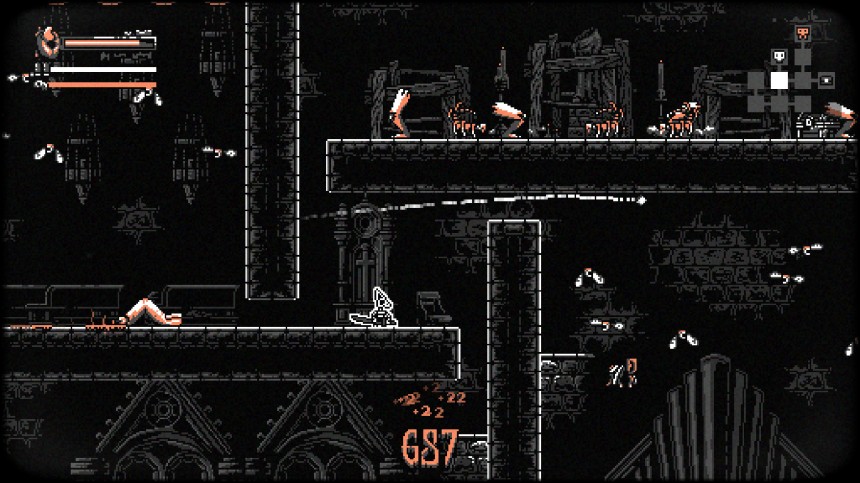 Not content with just being obtuse, Nongünz features an intensely melancholy presentation of chunky monochromatic pixel art dashed with a few muted colors. The game reeks of decay and lifeless expanses, and the horrific enemies like severed noses and globs of eyeballs only heighten the sense of isolation. The soundtrack supports admirably, though treads closer to that of Binding of Isaac than perhaps it should. Nevertheless these factors produce a morose, brooding experience that adds a hint of nihilistic dread to the secrets you’re digging for. Nongünz isn’t a remarkable platformer but it’s a remarkable experience, one that commands your attention and demands your investment to get anything of substance from.