I still love the original Final Fantasy. I’m not talking about any of the remakes, either, I mean my old, battered NES cartridge with the chunky graphics and knockoff D&D magic and non-functional effects and all. I love it because I grew up with it, because it was a fine product of its time, and because it led to better games in its wake. Some games still chase that ancient, retro ideal without fully understanding the appeal, and that’s where you’ll find Dragon Sinker. It puts up a fine front for a classic JRPG, but the more time you spend with it, the more cracks you find in that facade.

Long ago, the world was devastated by an evil dragon named Wyrmvarg. A trio of heroes, one human, one elf, and one dwarf, came together to defeat the beast and restore peace to the land. But evil never stays down for long in these games, and centuries later Wyrmvarg returned to subjugate the nations that rose in his absence. Without heroes to put him down once again he claim sacrifices from the kingdoms to keep him from torching everything. You step into the greaves of the human prince Abram as he challenges Wyrmvarg, only to escape with his life and embark on a grand quest to gain the strength and allies needed to vanquish the tyrant once and for all.

It’s well-trod ground for the genre, and serves as a perfect introduction to the classic gameplay. You’ll be leading Abram around as he gains party members, explores the world, and beats down monsters for coin and experience in random battles. The journey will take you across an adorable 8-bit-ish world of postage-stamp forests and maze-like valleys in search of mcguffins to defeat the mighty dragon with. In towns you’ll heal up at inns, gear up with new weapons and armors, and load up on healing items for your treks through the countryside. There are treasure chests to be found in the winding dungeons of the world, and random items in pots and barrels around town.

If you’ve ever played a Final Fantasy or Dragon Quest title, you know exactly what you’re getting here. There are a few innovations, though, lest you think Dragon Sinker is a straight rip-off in all but name. The party structure is probably the most interesting, because you actually have three parties at a time. Your party leaders are the only full characters whom you can gear up, and then supporting characters can be shuffled into the other three slots in that particular party. There’s a job system where you can switch around classes while retaining some bonuses from previously leveled ones, and also racial bonuses depending on the composition of your party. It’s not a minor thing either, because one of the bonuses is complete immunity to status effects (which are permanent until you rest or use an item to cure them) if your team is all dwarves.

The racial angle is an interesting one, and pops up rather frequently in the story itself. Originally one hero of each race came together to defeat Wyrmvarg together, but in the intervening centuries they grew to dislike one another. Your three party leaders end up being one of each race, and there’s some obvious tension between some of them that has to be worked through. Sadly that’s the only interesting part about the story, as the rest of it is the bog-standard “go to this place to get item of legend” until you assemble what you need to beat the final boss. At least, that’s what I assume because after almost four hours nothing else was happening and I was out of patience. 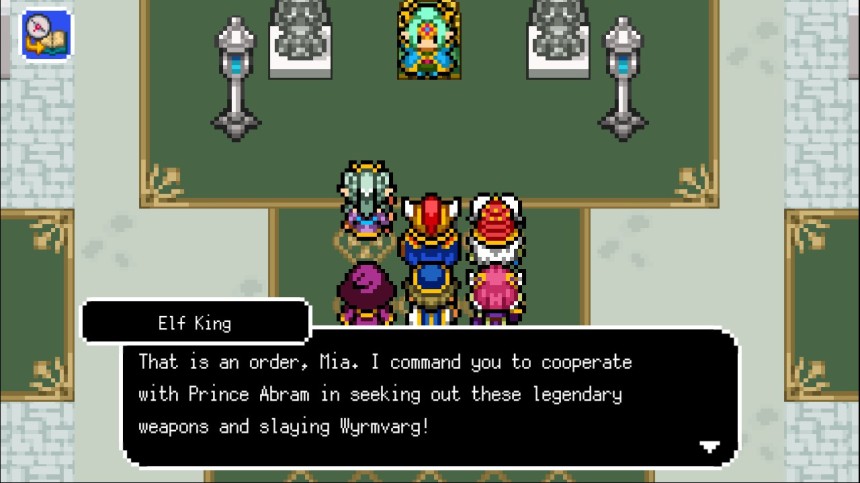 What kills Dragon Sinker is that the story never progresses past that single quest to defeat your nemesis. There are no twists or surprises, despite numerous side quests and optional dungeons. Even the original Final Fantasy had diversions like the witch’s cave and awakening the elven prince, and some smart pacing in how early you get the ship and other mobility options. Dragon Sinker is built in the mold of the original Dragon Quest but without the openness of that world, and the result is a completely rote adventure with no real payoffs. After four hours and a dozen new party members and a trek across the entire world I’m still on exactly the same quest I was originally, with not a single turn or diversion from that straight path.

I genuinely wanted to stick this one out but once the story lost its luster, cracks started to appear everywhere. By the third hour average battles were getting hard enough to require some extra grinding, which I was not about to put up with without a solid story to chase. The graphics are 8-bit inspired but commit the cardinal sin of mixing resolutions, making everything look like a cut-and-pasted mess. The interface is clean but requires multiple confirmations for simple shop purchases. There’s also a holdover cash shop from its mobile origins full of suspicious items like EXP doublers and additional class skills. You start out with enough currency to buy some of them and earn more at a slow but steady pace, but I’m starting to suspect the game was balanced around buying a bunch of these paid bonuses.

It’s a shame that the foundations of Dragon Sinker are too shaky to stand by, because there are some pretty good ideas here. There’s a shortcut button that heals your party using just enough magic from your healers, and a neat mix of skills that consume MP or HP depending on their effects. I like the three-party concept as well, but ultimately it made battles too drawn-out and complicated for my tastes. What you end up with here is a game that feels like it was designed in a rush in 1988, and then a week before release was re-tooled for the smartphone era. The story and pacing take a backseat to mechanics and economics, and the result just isn’t engaging or gratifying enough to merit your time.