Is there anyone alive who doesn’t love Where’s Waldo? I think not, ’cause you’d have to be pretty dead inside not to adore that goofy, stylish fellow and his equally eclectic friends. Where’s Waldo (or Wally, yes I am aware of the rest of the world) is a formative experience for a lot of children, mine included, and for good reason. His books provide hours of fun and occasional frustration as you pore over intricate scenes of beaches and ancient Egypt and movie sets and wherever else he ends up. Aside from a few antiquated attempts those enthralling adventures never made it to the gaming world, and no one really tried to emulate the experience. At least, not until now.

Hidden Folks is just that, a collection of folks hiding in scenes depicting cities and mountains and jungles and more. There’s no story to bother with here, just you and a whole bunch of folks to sift through until you find who you’re looking for. Each of the game’s two-dozen levels contains a number of folks, animals, or objects to locate amongst the many, many other things crowding them out. It’s not as simple as just skimming the scene either, because you can click on bushes and doors and signs to move things around and reveal particularly hidden folks. You can click on just about anything to get a reaction out of it, and honestly that’s like half the game’s appeal right there.

The novelty of an interactive picture search is definitely there but it’s the aesthetic that makes Hidden Folks truly shine. Everything in the game is hand-drawn in a modular style that allows buildings and people to be assembled from common parts into vast and varied arrangements. The style itself is charming as hell, using monochromatic lines to their fullest to produce entire worlds that look like clean textbook-margin doodles. It perfectly captures the dense wonder of a Waldo scene or a cartoony jigsaw puzzle, crammed full of little surprises to delight over. Though it never manages to be as varied as that which inspired it, thanks to the re-use of folks and buildings and decorations, there’s still plenty going on to keep your eyes busy. 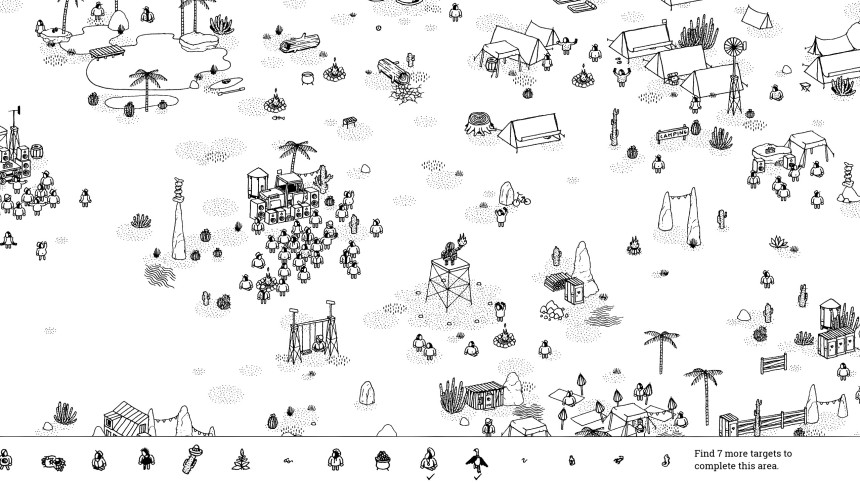 In terms of mechanics, it’s really not all that different from a hidden object game. At the bottom of the screen is a row of people or things you need to find and click on. Scrolling through it pops up helpful hints that give you a vague idea of what the target’s surroundings are like. You could scan the entire level in search of each one, and you’d be rewarded with lots of precious scenes, but the clues generally guide you directly to the folk or thing you need to find. They’re all unique in appearance, and despite some tricky-sounding targets like tiny worms or golf balls I’ve never gotten stuck on one for more than a few minutes. You only need to find a few to move on to the next stage anyway, though I’m always compelled to catch ’em all before progressing.

There are five thematic areas, forest, desert, city, snow, and factory, each comprised of three to five levels. The first one is always tiny and gets you accustomed to the types of folks and moving parts you’ll encounter, and then the scenes get far larger from there. Early on you’ll be able to see pretty much the whole place by zooming out, but the desert and city have scenes that stretch on and on and on. These are the tricky ones, the ones where you can’l take the whole thing in and narrow down your search, and while they look neat they tend to slow the game down. Many of your targets aren’t out in the open, either, requiring you to click on holes or drag open blinds to find them. Again, it’s a neat bit of gameplay but slows the game down further. 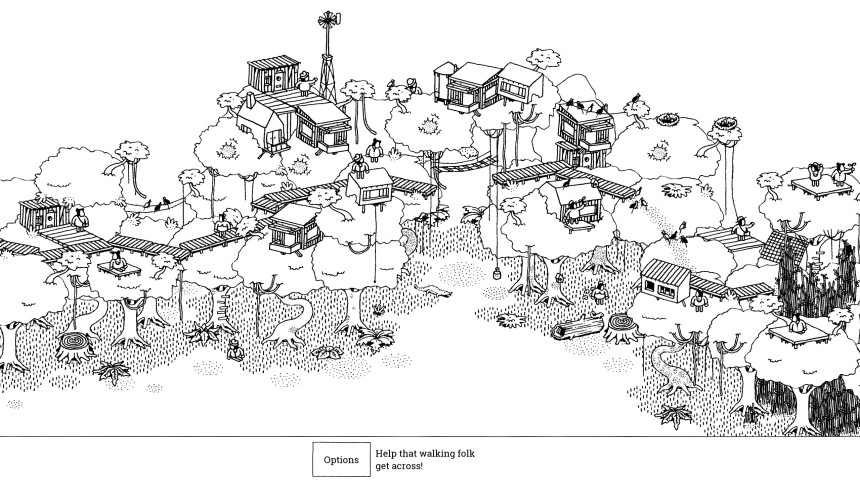 In the end, Hidden Folks isn’t the interactive Where’s Waldo that some of us have been waiting decades for. The graphics are intensely charming but suffer from a lot of re-use and simplified animation. They never quite reach that same level of magic and wonder you get from those that inspired it, although the sound design makes up for a lot with all the effects produced by people making silly noises. My itch for seeking out hidden folks has been scratched here, and scratched for a good couple of hours. It could do better, it could do more, but there’s a beauty in its simplicity that sets it apart and helps it stand as a fine experience in its own right.