It’s quite easy to make a game overly complicated, which is why it’s such a joy when you come across a simple game with plenty of depth. Games don’t need tons of interlocking systems to be deep and rewarding, they just need mechanics that push the player to excel. Mini Metro is perhaps the pinnacle of this design philosophy, a game that is immediately obvious in its workings but diabolical in its challenges. Every part of the game is simple and polished, from the concept to the presentation to the mechanics, but this gleaming simplicity gives way to moments of intense strategy. 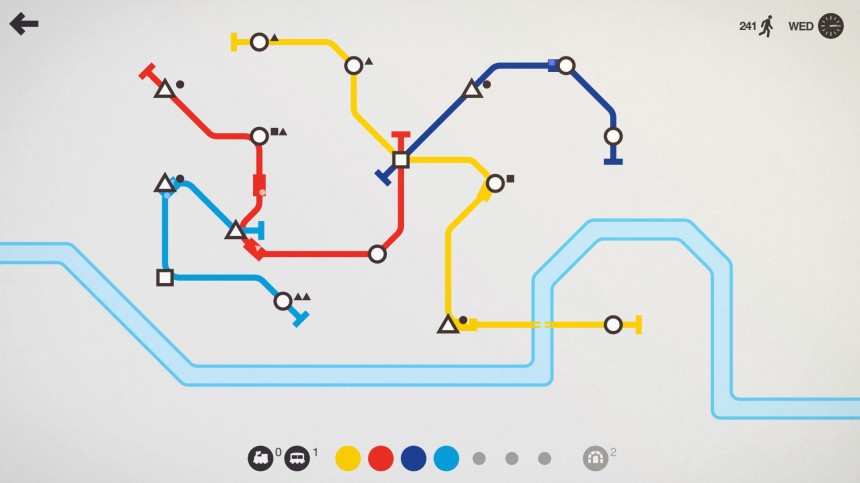 Mini Metro is a game of urban planning abstracted to an absolutely elemental level, laying subway routes between stations. Every game starts the same way with just three stations, represented as a circle, a triangle, and a square. You need but click and drag between them to lay your lines, and then watch your boxy little train zip along and pick up passengers. Each station generates passengers bound for the other station shapes, so ideally you want at least one circle, triangle, and square on each line. New stations appear as time rolls on, and eventually you’ll start linking up with star stations, hexagon stations, and more unique stops to link up to your network.

Your resources in servicing the city are limited, and must be managed from week to week. Generally you start with just three lines and three trains, but at the end of each week you get a new train and a choice between two additional resources. These can be more lines, more trains, carriages that add capacity to existing trains, more tunnels or bridges for crossing map obstacles, high-capacity stations, and even features unique to some maps like bullet trains. All of these must be used intelligently to keep your stations from overloading, because once a stop hits capacity it triggers a countdown to game over. You can re-draw lines and reassign trains at any time, so as the map gets more crowded you might be doing some panicked reshuffling to stay afloat. 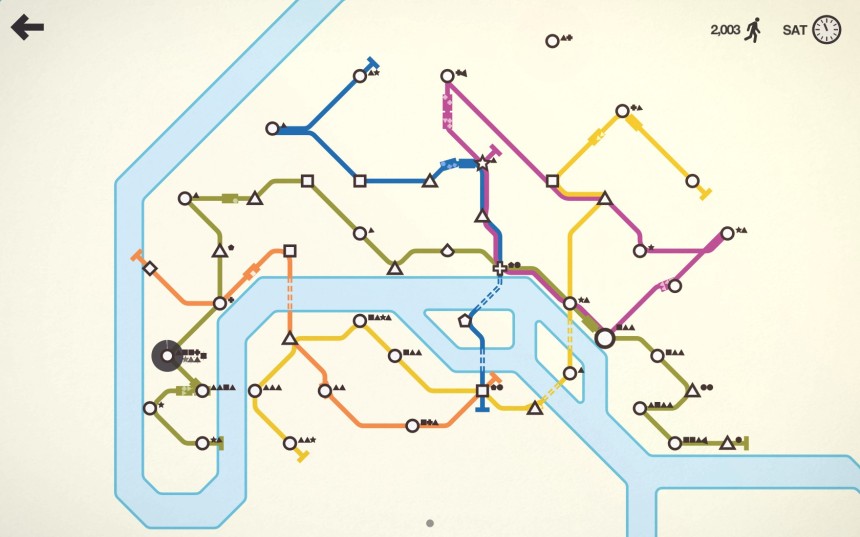 Honestly, every game of Mini Metro ends in panic because of how insidious it is about ramping up the challenge. From the placid beginnings of few stations and gentle expansion, you’ll start getting stations appearing in uneven groupings and unique stations in impossibly awkward places. Eventually every scenario explodes into a nightmare network of wrong stations in wrong spots, forcing re-draws and overhauls of your entire service just to reach one damn dot that opened up across the river in the southwest corner. There’s no victory state, just holding out as long as you can so a catastrophic failure is the only way it can end.

What makes Mini Metro such a gem is how it manages this mounting tension. It all happens so gradually, accompanied by soothing ambient music and pleasant jingles of services running smoothly, that you almost won’t notice until it’s too late. Like any good puzzle game there’s pressure to perform here, and the endless nature of the scenarios always push that pressure up to unmanageable heights. But it’s presented such that it never triggers that uncomfortable anxiety you get from trying to form a clutch tetris or landing that last bubble in Puzzle Bobble does. It’s a fun challenge through and through, one that never gets old or tiring. 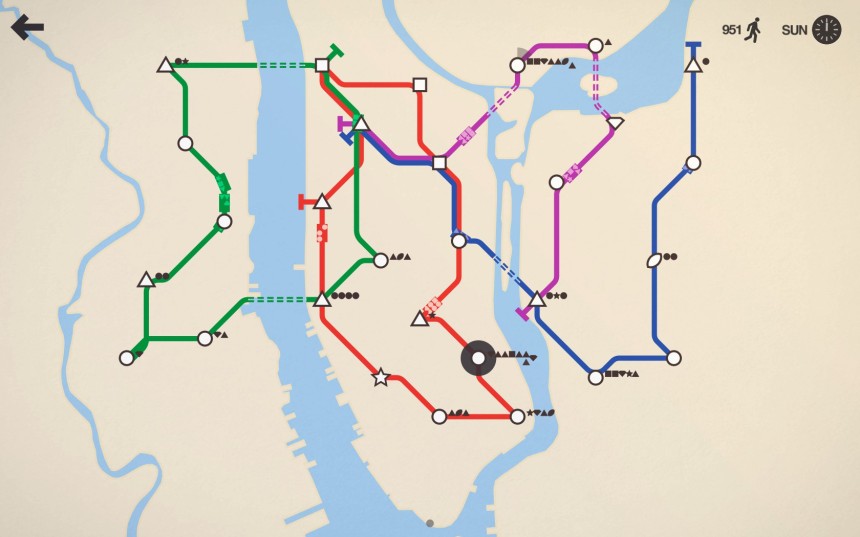 Since release the number of scenarios has expanded to twenty, each with its own map design, station layouts, and capacities to contend with. Paris and New York play very differently, for example, with Paris having a lot of tightly-clustered stations with low capacities, while New York has them spread far and wide across the boroughs. The game also has daily challenges to compete in, with everyone taking a shot at the same map and station growth patterns. You even get two additional difficulties if you tire of the normal game; there’s a sandbox mode if you just want to draw pretty lines and work on efficiency, and an extreme mode where you cannot redraw existing lines which makes me sweat just thinking about. And if you’re into achievements, they’ve got some well-designed ones to keep you playing. Each city has a basic competency achievement, and then one that requires a specific challenge condition, like moving 1200 people around London using only one tunnel.

All of this is packaged in a fantastically clean aesthetic taken right from actual subway maps. It’s a genius decision that compliments the theme, keeps the interface clean and inviting, and encapsulates so much of what makes the game great. Honestly, I like puzzle games well enough but few have sucked me in like Mini Metro. And while it certainly doesn’t have the complexity of something like Transport Tycoon or Cities in Motion, I find it scratching the same itch in how well it abstracts the subway systems for each city. For fans of puzzle games this one is a no-brainer, and even if you’re looking for something more on the management side there’s something to be said for Mini Metro.