Review: NOT A HERO

I just killed an entire apartment block full of people. To be fair, they were breaching the walls of adjoining buildings trying to get the drop on me, but a few well-placed mines and a bomb strapped to a cat solved that problem. I was quick enough to trip most of them up and pump uzi rounds into their faces, and when their backup arrived I had a mag full of drill rounds to bore through their skulls. At last, once everyone around me had been properly ventilated, I could grab that floor lamp my boss wanted. I don’t think a game title could be more on the nose than this one, but there aren’t many games that can match its chaotic murder sprees either. 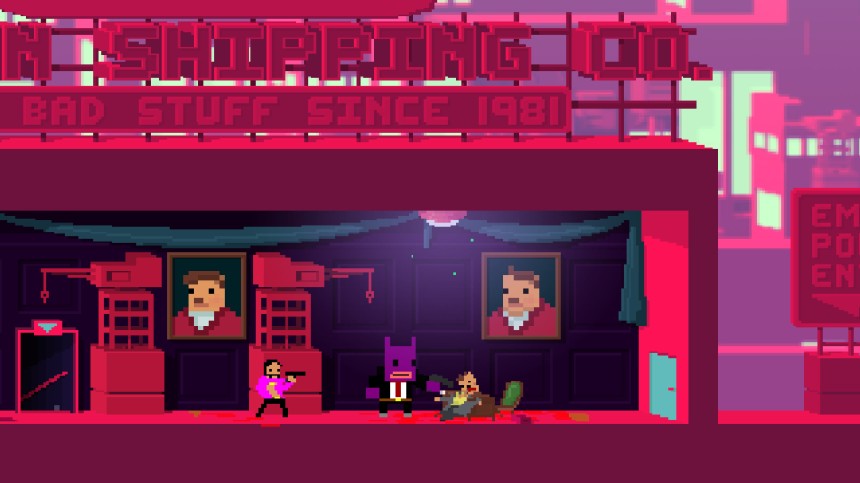 Sometimes I can’t do a story any more justice than its own writers, so I’ll crib straight from the store page for you here: “Professional assassin turned amateur campaign manager Steve is charged with cleaning up the city by an anthropomorphic rabbit and mayoral candidate from the future named BunnyLord.” Put simply, you’ve got three weeks until the election and three crime groups to wipe out if you want your boss’s approval rating to peak. Each day sees you infiltrating a building full of gun-totting neer-do-wells on various errands, everything from saving hostages to stealing gerbils to murdering informants. It’s always going to be a shootout on the way to your goal, and fortunately you’re a way better gunman than you are campaign manager.

The basic controls of NOT A HERO are simple enough, move left, move right, and shoot. You can take cover in the background to avoid shots but so can your enemies, so your lengthy slide is great for closing distance or tripping foes to better jam your gun in their mouths. Against single enemies you’re nigh unstoppable but of course these aren’t going to be fair fights, throwing multiple gunmen against you constantly and upping it to dozens in the late game. Skillful combinations of slides, dodges, and executions are key to clearing floors and staying alive, but you’re generally fast enough to book it out of bad fights to collect yourself and let your health regenerate. 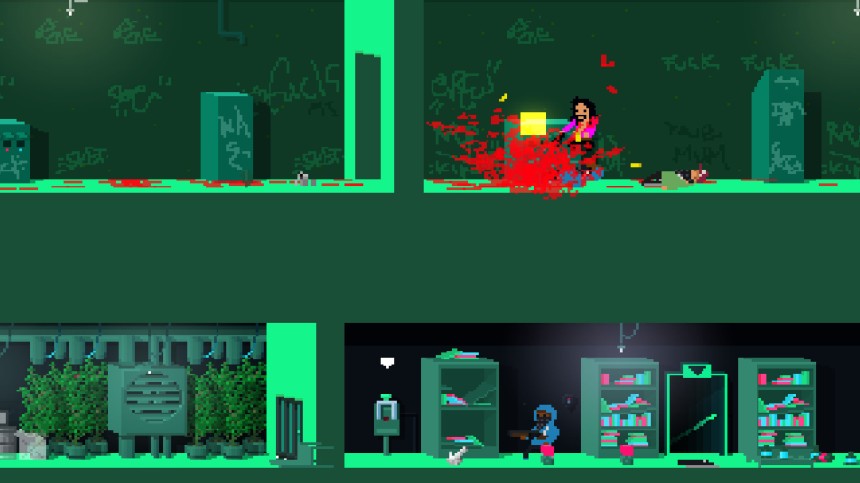 You might be reminded of a side-scrolling Hotline Miami as you blaze through your bloody missions, but that last point about health is a key difference. Whereas Hotline required you to perfect your dance of death, NOT A HERO gives you a five-hit buffer to barrel into battles with. Mistakes are far more recoverable here and shootouts can rage all across a level if you have trouble sealing the deal against larger groups. The speed of the action makes it a thrilling affair, and there’s nothing quite like sliding into someone and splattering them all over the floor in a single, fluid slide. You unlock more characters as you raise BunnyLord’s approval rating, each with unique gunplay styles. Depending on who you pick you can be as mobile, as sturdy, or as tricky as you want to be.

The action is wild and frenetic, backed by a story chock full of absurdity and madness. BunnyLord is a nonchalant psychopath who opens every mission with a slideshow briefing, outlining your day of murder with upbeat graphs and motivational speeches. He treats you to another monologue at the diner when you succeed, and introduces new characters there when they get unlocked. The humor is aggressively irreverent and may come off as too random for some, though. I was fine with it for the first hour or two but after that started skipping dialogue scenes, something I almost never do. Still, it makes an appropriate backdrop for the vibrant killing sprees and bizarre item hunts you’ll be charged with in each level. 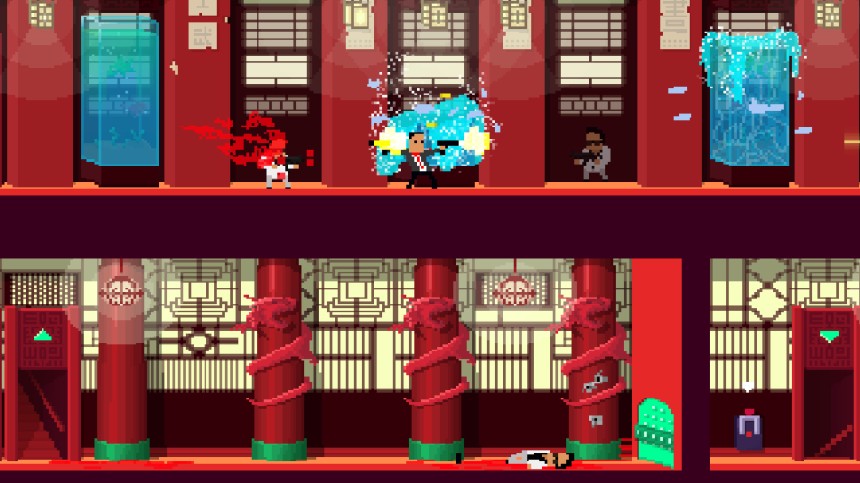 Honestly there’s not a whole lot I can knock NOT A HERO for. It’s a very specific kind of game, a fast-paced precision action joint, and the character movement is fast and fluid enough to make just scooting around the levels a joy. Each level has three optional objectives that are pretty reasonable for the most part, and there are a few secret levels to turn up as well. Dying to an ill-timed dodge or a relentless enemy near the end of a level can sting, but no more so than something like the aforementioned Hotline Miami. And the presentation is absolutely lush, with colorful, detailed pixel art animated in loving detail and a thumping, quality soundtrack. You’re sure as shit not a hero here, but when being bad is this fun it’s hard not to roll with it.