Some games seem to do everything right, and then take one bizarre step off in an unfun direction. I personally loved Mercenary Kings, for example, but there were definitely some questionable decisions in there like the boss capture missions and the massive re-use of sprawling maps. It’s ironic then that Flinthook, the most recent game from Mercenary Kings developer Tribute, presents an even tighter design and experience save for one major misstep. It’s enough to knock it down from classic to simply good, but that still leaves a thrilling adventure of space swashbuckling to enjoy.

Flinthook is an interstellar buccaneer with a sheet for a head and a handy hook for getting around. He works alone, tracking the worst of the worst space pirates down for the tasty bounties on their heads. All it takes is a living compass that eats gems for him to divine where his next mark is hiding, but alas those gems are all in the clutches of the pirate crews. With loads of helpful perks and gadgets, Flinthook blasts through all sorts of scurvy vessels in search of gems, treasure, and other secrets of the cosmos. And it seems like one of those secrets is interested in him, too.

That’s a lot to digest for a roguelike platformer, but the important parts are that you’re tracking down pirate captains, and you have to blast through a bunch of their crew to find them. Every time you start a game you choose a bounty to hunt, and each one requires a different number of ghost gems fed to your compass buddy for him to produce a location. There’s one ghost gem on every ship you raid, so however many you need is basically how many stages you need to play through before facing the boss. You get three ships to choose from at a time, marked with special features like treasure rooms or maze-like layouts or more numerous enemies. 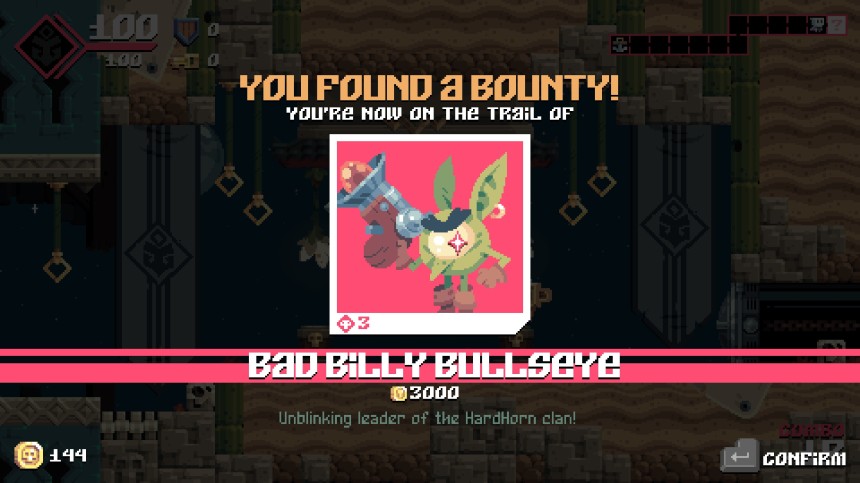 The ships themselves are randomly-generated grids of rooms, mostly one-screen affairs but with a few variations that stretch on aways. If a room contains an enemy encounter you need to beat the waves of baddies before moving on, but in truth most rooms just feature traps to evade. They might be spike plates or spinning balls or laser beams or poison clouds but they’re all designed to make getting from one side of the room to the other a pain. You’ll want to comb each room for breakables too, because gold adds up and is used to buy perks that stack with the ones you unlock via metaprogression and set before you start your run. At the end of each ship is a harder encounter guarding the ghost gem, not really a miniboss but usually tougher versions or groups of normal enemies. Once they’re gone and the gem is in your compass’ tummy, it’s off to the next ship.

None of this would be very remarkable without the awesome tools at your disposal. Flinthook has two key gadgets besides his weapon, and they are the quickhook and the chronobelt. The quickhook is really the cornerstone of the entire game, a little anchor that you can whip out to hook onto rings suspended in every room and launch yourself in that direction. It’s a bit grappling-hooky but there’s no swinging, just a swift boost towards the ring. Your hook is on right trigger and comes out fast, and coupled with the absolute proliferation of rings it allows you to stay mobile and aerial indefinitely. There’s not even that much of a learning curve to it, as I was able to get swinging and speed through rooms right from the first bounty. And if your reflexes aren’t up to par, the chronobelt lets you slow time to a crawl with the left bumper so you have enough time to line up hooks, make clutch shots, or dodge dangerous projectiles. 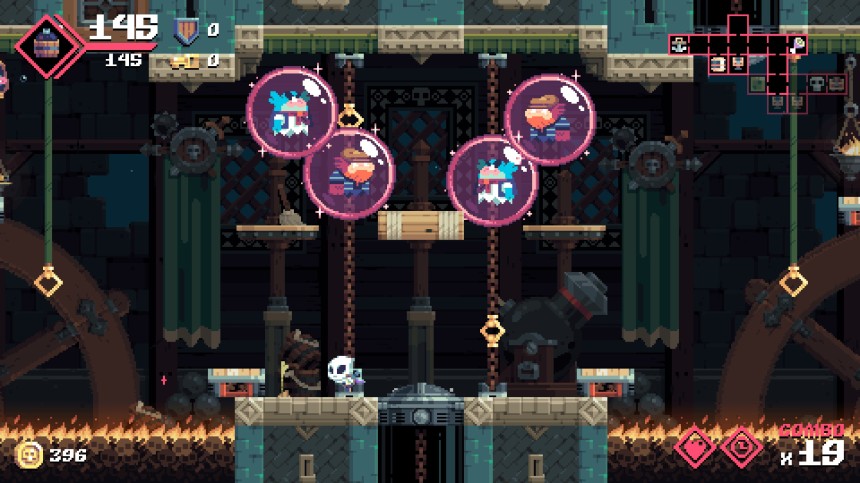 It’s really quite a joy to go hooking around levels, swinging circles around enemies and snatching loot as you speed by. But inevitably you’re going to run into a particularly nasty trap, or overwhelming group of enemies, and die. And this being a roguelike, it’s going to wipe any progress you made towards tracking down your bounty. That won’t matter so much when you’re still coming to grips with the game, but later on when you have to complete five or six challenging ships to reach the boss, those unlucky encounters are going to sting. Worse still is that each boss can have pretty involved gimmicks and patterns, and can very much kill you while you’re learning how they work. I’m broadly okay with the roguelike structure but Flinthook’s feels particularly punitive, forcing you through similar ships over and over while you practice battling bosses.

The metaprogression doesn’t do a whole lot to alleviate the pain, either. Big chests give you credits that can be spent outside bounties to unlock new perks and game features. Perks can be equipped before you start a run, granting more health, more damage, more XP, more gold, and other effects. You earn XP depending on your performance during a bounty run which unlocks new perks to buy and gives a few free ones, but leveling can be slow unless you’re stacked with XP perks or actually finish a bounty. Overall it has a less dramatic effect on the experience than other systems that add new item drops or provide new tactical options as you progress, so if you’re not keen on the core Flinthook experience it’s not going to do much for you.

The graphics are lovely at least, with some wonderfully detailed pixel art and emotive animations, though elements of the foreground and background can blend a bit more than I’d like. No complaints about the soundtrack though, which features a bevy of rollicking, energetic tunes to battle pirates to. Along with the action it really helps me get excited about playing Flinthook, and I always enjoy my time with it until something dumb or obnoxious kills me and I suddenly want to be doing something else. The core of the game is absolutely fantastic, but much like Mercenary Kings what’s built around it is not going to appeal to everyone. It does to me, for now, and as long as it does I’m going to keep blasting baddies and hoovering up loot with a grin on my face.