I’ve seriously lost count of how many get-to-the-exit puzzle platformers there are in the world now. They need to do something truly special to stand out from the endless fields of samey games, and I will tell you right up front that Another Perspective does not do this. You have absolutely played this game before, in better forms like Braid and P.B. Winterbottom, and if that was enough for you then you don’t need to spend your time on this one. If it wasn’t, though, and if you’re still jonesing for keys and doors and brain-teasers keeping you from either, then this will still do the trick well enough. 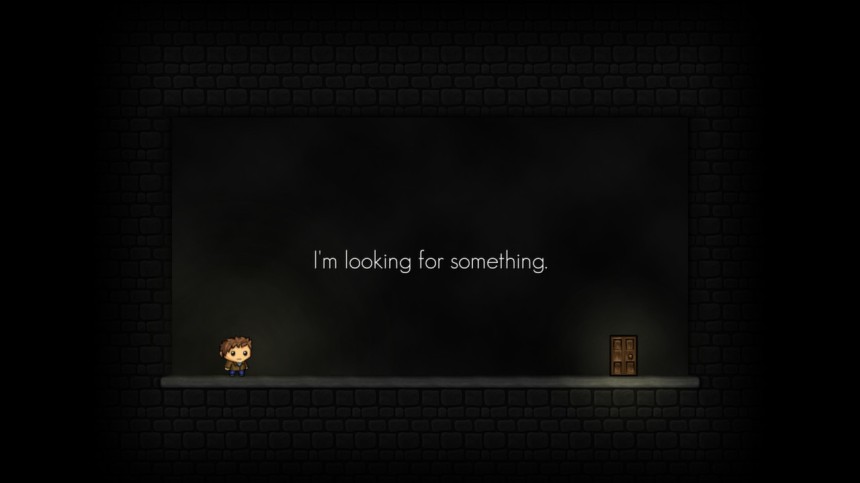 Another Perspective is the story of a little fellow lost in a hazy maze of chambers. Every door leads to yet another chamber, each one more complex than the last. He needs keys to get through those doors, and eventually he comes across keys he can’t reach by himself. But he also comes across other versions of himself, versions that you (the player) can swap to in order to find new ways to said keys and said doors. The mechanics eventually expand to flipped-gravity versions of your little fellow, as well as fellows of different sizes, but the goal always remains to reach that next door.

Your diminutive friend will be talking at you the whole way, too, in the form of text that fades up during the levels. He knows he’s searching for something but not what it is, and over the course of the game he’ll work that out along with his purpose in this place. There’s not a lot of story here because what there is focuses back in on itself, exploring the metaphysics of its own game world. Your character is going to do a lot of obvious questioning that eventually leads to an existential crisis, which honestly isn’t terribly compelling given how the entire game is built around him. It’s a game about itself, so if you’re in the mood for that sort of meta navel-gazing then you’ll probably appreciate it more than I did.

The puzzles are clever enough and switch up mechanics frequently, but the backdrop for your adventure is always going to be gray brick on gray clouds. It’s a terribly dull-looking game which doesn’t pair very well with the self-serving plot and ponderous puzzles. You’ll get about 30 minutes or so out of the main game, plus however far you can get into the bonus “Mystery” mode of more challenging puzzles. I’m right on the verge of talking myself out of this one but Another Perspective isn’t bad, it’s just unambitious. The graphics are unimpressive, the gameplay has been done better, and the story is just “what would a real person say here” in every single room. You can do way better with your money and your time, but because you can do so much worse in the vast, untamed lands of platformers I’ll still give it a pass.