“Dumb fun” should probably be its own genre at this point. It’s not the kind of thing you want all the time but I definitely find myself in the mood for doofy humor and mindless action now and then. Mayhem Triple is built from the ground up to service that need for brain candy, from its hordes of mindless foes to its over-the-top weapons to its terrible, why-did-I-laugh-at-that jokes. And honestly there might be enough meat to this one to keep your blasting and giggling away for a good long while. 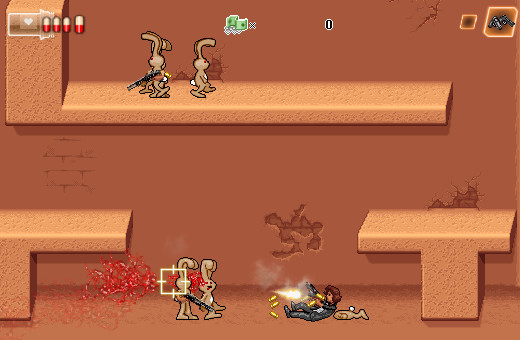 Idle badass Mig Carter is awakened from his desert hovel by the sounds of chaos in the sky. An armada of alien bunny rabbits has descended on the Earth and he’s got the arsenal and machismo to stop them. Armed with shotguns, stake launchers, and remote-controlled sawblades, he’ll carve his way through ruined buildings and alien bases to get at the furballs behind the assault. And if that doesn’t work out, there might just be a time machine laying around to give him another shot at the whole thing.

Mayhem Triple is steeped in absurdity on every level, if you couldn’t tell already. Your boy Mig controls with the common WASD and mouse combo for free movement and shooting, and he can also do dodge rolls and some parkour to get the drop on enemies. What really gives him an advantage, though, are the 20+ guns he can wield to annihilate the cotton-tailed menace. Starting with akimbo pistols and uzis he can move up to shotguns, sawed-offs, assault rifles, and rocket launchers, and then into exotics like bear-trap launchers, over-charged tazers, and particle beam cannons. You are guaranteed to find something that’s hilariously fun to kill with, and you’ll have no shortage of enemies to work over with it.

There’s not a huge variety to the enemies but there doesn’t really need to be, as all the variety comes in the ways you can mow them down. Bunnies will be your most common foe, but they come armed with the same guns you do. You’ll also run afoul of attack helicopters, mutant animals, and my personal favorite, bomber drones shaped like turgid metal dongs. On top of that are some grand setpieces every few minutes like evading crashing UFOs, outrunning a giant bunny monster, and stomping around in an invulnerable mech. There are a few that are less fun like an obnoxious zero-G segment and a part where you have to guide walking bombs around, but these are quickly forgotten after resolving a hostage situation with a sneaky grenade and gunning down rabbits in sub-orbital free-fall.

Honestly, Mayhem Triple is so reckless with its silliness that it’s impossible not to like. Even the characters manage to endear themselves with mangled one-liners and genre-savvy insight usually reserved for more clever games. The story definitely goes for broke on the weirdness too, invoking a time loop at the end that poses new challenges and story beats every time you start another New Game+. I’m not normally a NG+ guy but I immediately dove into this one, as the plot just kept on humming along to its insane tune. The upgrade systems in the game are also dependent on looping, as you likely won’t find enough keys for the perk system to get much out of it off of one run. But all these features combine to produce a game that’s surprisingly gratifying to replay.

I wouldn’t call the graphics amazing but the characters are well-animated and the action is always clear. The perspective is a little wonky at times that can make it a bit hard to judge jumps, but never to any major detriment. There’s not much to the sound design either, though what effects there are tend to be strong and meaty which helps the guns really shine. The whole game shines in its own wild way, really, a true little gem lost amidst a sea of platforming mediocrity. For the action-oriented platform fans this one is definitely worth checking out, for the impressive arsenal, insane story, and undeniable charm that runs throughout.