Once you have a winning formula for a game, it only makes sense to combine it with others to make something greater. Minecraft was obviously a seismic force in sandbox games, and if the modding community is anything to go by people wanted to expand the possibilities almost immediately. Staxel is borne from just such a desire, in this case to bring the free-form building of Minecraft to the structured, relaxing farming of Harvest Moon or Stardew Valley. Even in its early form it’s a potent combination, but one that remains unbalanced in some painful ways. 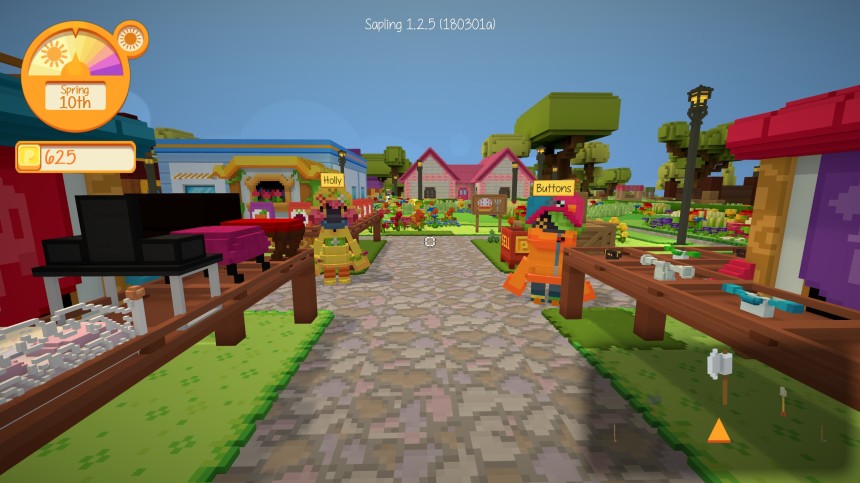 You are a newcomer to a tiny, blocky town on a tiny, blocky island. Luckily for you there’s an abandoned farm for you to take over, along with some loose tools and livestock to claim. It’s entirely up to you how to proceed from your humble beginnings but farming is definitely in your future, tilling soil and watering crops and milking cows to bring in the cash you need. The inhabitants of the island are also keen to get your help with little tasks here and there, as well as bigger jobs like building new businesses and residences to expand their village. Ultimately the fate of everyone is up to you, and your agricultural and architectural acumen will shape this tiny world however you see fit.

Once you make your avatar, Staxel drops you into a fairly complete tutorial with a doofy NPC named Farm Fan of all things. Here you’ll learn how to find your way around, talk to people, collect things, do some basic building and farming, and so on. Once that’s done you are absolutely on your own, with the entire island your tiny oyster. Don’t expect any significant exploring or spelunking, though. There’s one abandoned mine you can strip for wood and rustic decor but aside from that the countryside is just there to provide you basic materials to build with. Most of your attentions will be focused on the town, where folks will give you jobs like delivering packages or building new structures.

The point of the game seems to be helping the town grow, and the way you do it is pretty neat. Every building in the game has a marker that establishes the boundaries for the structure and what features it requires to function. During the tutorial you’ll get a marker for your barn, which requires only a roof and two feeding troughs. The troughs are specific furnishings you need to craft and place but the roof was extremely liberal in its interpretation, as I satisfied the requirement just by building four posts and the cross-beams between them. As long as you have the right furnishings you can build however you want, which should excite all the creatives in the audience.

Despite the endless possibilities of this system, building is probably where the game is going to lose you. Staxel borrows a lot from Minecraft but diverges in a key area, that being how you get building materials. If you want to build a cabin or a tower or a whole castle in Minecraft, you can turn up the blocks pretty easily by chopping trees, mining stone, and assembling new blocks instantly from your inventory. As you’ll see when you peruse your crafting list, all of the proper building blocks in Staxel must be assembled. The game has an extensive crafting system that uses multiple tables to saw, combine, tile, or assemble blocks and furniture, and even the most basic wooden planks require a two-part crafting process and items that must be bought.

I think this is how the developers intended the balance between farming and building to work, really. In Harvest Moon or Stardew Valley you farm until you have enough money for new buildings or upgrades, and then you pay for someone to build them. Here in Staxel you build them yourself… so what do you need money for? To answer that question, all of your block and furniture crafting requires nails or glue or varnish which must be purchased. They might also require special crafting tables that you’ll need to save up for days to buy. And this is just for the most basic (and honestly kinda ugly) blocks like bricks and wood. If you want to build cool buildings that match the rest of the village, you’ll need to buy the blocks and furniture outright at a rate of just a handful a day, judging by how my farming efforts were going.

The inability to be self-sufficient in your building is a pretty big betrayal of the Minecraft formula, and while I understand the need to give your farming a purpose it still sucks a ton of the appeal out of the construction side. I spent one evening digging and chopping trees and sawing lumber and building blocks for the foundation of a house, and after three in-game days and all my money spent I wasn’t even done with the floor. It’s going to take you ages to realize whatever designs you have in mind, and while the farming is solid and the animals are cute it just doesn’t feel as gratifying as a full farming game because it’s almost secondary to all the crafting and building you want to do and mostly can’t.

There’s a bit more to the game than just this dichotomy right now, but it’s still a mixed bag. You can go bug-hunting or fishing and sell whatever critters you find (or use them for constructing apiaries or fishing holes, even), which is what I spent a lot of time doing and rather enjoyed. You can buy more crafting blueprints to make more building materials but honestly the crafting system is pretty terrible, with confusing in-game interfaces for placing and processing items directly on the tables and agonizing wait times. There are little errands to run for residents but these just reward you with random bits like fireworks and toy balls, not money or new blueprints or anything useful. Oh, and I haven’t even touched the cooking system which actually requires you to follow recipes and chop, mix, fry, and simmer ingredients in the right order.

Right now Staxel is a pretty complete, polished package that does what it sets out to do. It’s just that what it does is not going to appeal to a lot of the people it’s supposed to. Folks coming here for a farming sim will get a simple one with an open structure, and plenty of opportunities to grow huge fields of crops and care for animals. Anyone coming for the building, though, is going to run into all sorts of roadblocks with crafting and funding your projects. I never thought Minecraft needed to be any slower and yet this is a much more methodical, nuanced take on that sort of building. The foundations are solid now and there’s definitely a full game’s worth of work to be done, but I need it to feel less like actual work before I can give it a stronger recommendation.