Review: Nothing To God

Easily my favorite part of the indie dev scene is the wealth of creative ideas that become full-fledged games. Many of them are unique or risky enough that they’d never be caught coming from a major publisher, and yet still prove to be worthwhile experiments. Nothing To God is the kind of game that rides on a simple but unique premise, a bullet-hell game where you cannot fight back. It’s not an idea that would work in most contexts but here it’s married to thoughtful ruminations on mortality and divinity, providing a meaningful backdrop to the oddly engaging dodging you’ll be doing.

The god of nothing has overstepped his bounds and created you, a husk formed for a singular purpose. He sends you forth to receive the blessings of the land’s other gods, a pantheon of self-absorbed deities who will pose deadly challenges to you before even considering your plight. As you journey forth your awareness of your existence and the world around you grows, as well as your understanding of your task. Eventually you will return to the god of nothing not as the simple husk he created, but as something far more.

Bullet hell games have come up with all sorts of scenarios to lampshade their chaos with, but this is one of the few that feels thematically consistent between narrative and gameplay. Your husk is compelled to complete its task, though it means facing certain doom every step of the way. At the same time it is learning about being, about feeling and sensing and deciding. Fitting these parallel journeys to challenges where you must find the right path or be annihilated seems terribly appropriate, especially when the gods taunt you with their challenges. The story is told in text both between battles and during them, so you’ll be facing the mad ramblings of gods and dark portends of their world as you skirt death itself.

The tone of the game is excellent, giving it a very distant, alien feel with its world fallen to divine whims and hints of horror and atrocity peeking out from the corners. This extends to the dozen or so gods you will face and their unique bullet patterns. While the game starts with basic spirals and walls of shots it quickly moves into more interesting mechanics, each again thematically consistent with their deity. The god of law and justice, for example, is compelled to halt your journey but wishes to do so honorably, so his patterns have big gaps in them but cannot be passed unless you purposefully endanger yourself. The encounter with the god of music plays more like a rhythm game than a bullet hell battle. This creativity helps drive the latter half of the game when it opens up a bit and lets you choose your path.

Despite the clever structure of both narrative and battles, I can’t deny that the game is limited by its scope. It’ll take you about an hour to see this one through to its emotional conclusion, at which point all you can do is challenge yourself by turning off the very useful assists like checkpoints and hitboxes. The pixel art is serviceable but I’ve never been a fan of mixing resolutions, and some of the backdrops are chunky to the point of distraction. There are almost no sound effects, though the soundtrack does a fine job of filling in the gaps. And while it didn’t cause me any actual troubles, the game can get a bit choppy during the densest room-filling patterns. 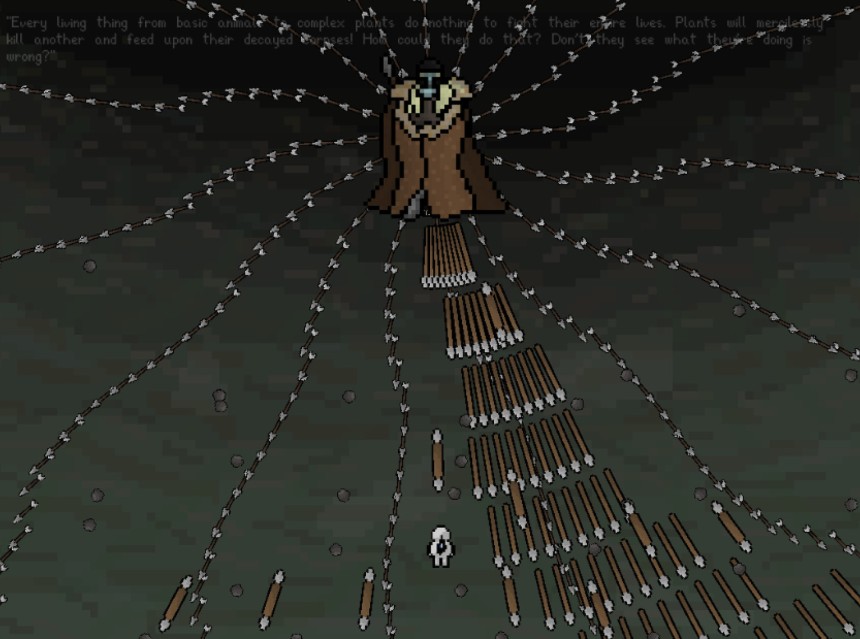 I have nothing but respect for one-man projects but I have to be honest about their limitations. Nothing To God isn’t going to be the prettiest or most polished game you play this year, but the creativity that bore it is absolutely worth experiencing. After a slow start I found myself eager to see the next god, to hear their twisted views on the world and experience their unique attacks. The story drove me on to the end, and it’s an ending that’s stuck with me more than some major titles. As an indie experiment this one should not be missed, and as a game it’s solid if a little rough around the edges.