I was never really a Left 4 Dead guy, despite my overwhelming adolescent love of zombies. I get the appeal and all, but I never really cared for running through the same maps over and over, shooting the same zombies over and over. For that reason I missed the first Vermintide entirely, and only got ahold of this one out of sheer curiosity. But I’ve been playing this one every day since I got it, for hours on end, aching for new weapons and new skills and new rats to murder. There’s a lot to love about this title, even if it doesn’t really want your love at first. It just takes some time to understand that all those slavering rats and screaming madmen are its gift to you.

I’m not really up to speed on my Warhammer lore and there’s not a lot of obvious references to the first game that I can see, so we’re jumping in cold here. It’s a Warhammer game so you can assume everything is terrible and everyone is dead except the monsters and the insane Übermenschen that fight them. The game loads you straight into the very clever tutorial where you, Markus Kruber, psychotic footman, are a prisoner of the skaven horde. They’re building something called a skittergate for the chaos hordes of the north, but something goes wrong and jostles you free of your cage. In your escape you reunite with your team from the first game, Bardin the jolly dwarf, Sienna the pyromaniac grandma, Saltzpyre the zealous witch hunter, and the elf that everyone hates whose name I forgot. Together they’ll take the fight to the rats and barbarians overrunning everything and kill a bunch of people and break a bunch of evil stuff.

I’m being a jackass here but the story doesn’t really take a backseat to the slaughter, and that’s one thing that impressed me right away. The game is thick with Warhammer lore, each mission being set in a specific place with specific named features and history, and with a very specific thing you need to do to put a dent in the skaven invasion. Your band of hearty murderers comments plenty on their task and on each other, filling what air there is between screams and clangs with witty barbs and crazed exultations. Right from the tutorial I liked these characters a lot, even the dumb elf whose name I forgot, and a big part of the fun on each mission is listening to them badger each other.

The other part of the fun is slaughter, and holy Jesus this game does not disappoint. If you’ve ever played a Left 4 Dead you know exactly what you’re getting here, long hikes across terrain dotted with enemies, occasionally triggering a surging horde of dozens or more foes bearing down on you. Unlike the zombie game though this isn’t primarily a shooter. Everyone has a ranged weapon and skills but ammo tends to be limited, forcing most of the murder to be melee-made. I’ve always appreciated first-person hack-and-slashing, from Chivalry to Shadow Warrior, but none have been quite as satisfying as Vermintide. Weapons feel like they actually connect with meat and bone, shaking the screen and resisting your blade even as it rips a rat’s head from its neck. Blood and limbs rise in great clouds from horde battles, whether severed by sword or axe or arrow or magic or whatever else.

You’ll be getting up close and personal with your foes constantly, and if that sounds dangerous you are absolutely right. Vermintide 2 is surprisingly challenging to get into, even for someone like me that didn’t expect to do well from the onset. The melee system is plenty complicated with light and heavy attacks, armor piercing, blocking and dodging and pushing, and so on. Even on the easiest difficulty you need to keep from getting surrounded and stick with your squad, and then know how to handle the many armored and special enemies that attack. There are rats with hook, rats with flamethrowers, rats with gatling guns, sorcerers with force pulls and tornadoes, and other horrors that can separate and murder the unwary. Then there are the bosses that can be nightmarish to wear down if you are unprepared, and unlike L4D the encounters seem to trigger randomly instead of being directed. Most of the time you’ll have a fair challenge but sometimes you’ll have a breeze with no bosses, and others you’ll have a boss and three specials and a horde to deal with.

Part of the challenge stems from the progression system which starts you out pretty rough. You have five equipment slots for two weapons and three accessories, each with a Power rating. Their Power ratings are averaged and added to your character level to determine how much damage you do (and other factors), so upgrading your gear makes you strictly better on the battlefield. Starting out you’ll barely be able to kill specials and bosses but once you open a few boxes, you’ll feel like the scion of death that keeps the game engaging. Gear comes from loot boxes earned from leveling up or completing levels but never fear, they can’t be bought and they produce items within a strict range of your current Power so progress is actually quite steady no matter what you do. It’s still fun getting new weapons to try or finding trinkets with significant effects on them, and there’s a crafting system to help you recycle the junk you find as well.

On top of this are the five classes you can play as, each with three subclasses called careers to choose from. They tend to break down into archetypes like tanks or ranged classes but they’re versatile enough to be useful in any party of four. All have an active ability and several passive effects that set them apart, as well as simple skill trees that allow for a perk every five levels. I won’t lie, the combination of leveling and loot systems is a huge draw for me, as I love building characters as I build my own skills at the game myself. You can also pick up optional items during missions like tomes and grimoires that cripple you in some way but award additional XP and better loot boxes if you finish with them, thus further rewarding mastery of the game. 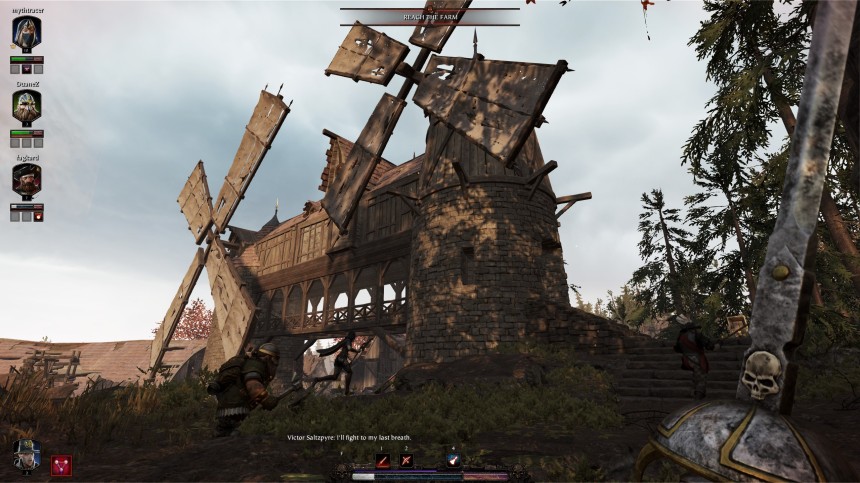 The icing on this bloody, moldering cake is how incredible it looks and sounds. The graphics are crisp and detailed and levels feature scenic sun-touched fields and freezing peaks in addition to the piles of lovingly-rendered corpses. Enemies are incredibly distinct even when rushing in hordes, and setpieces are grand and memorable. Everything squishes and clangs and drips and crunches just like you’d expect too, all set to drum-heavy tracks perfect for engaging in dark fantasy warfare. I’ll add the caveat that games like this change drastically over their lifespans and Vermintide 2 just came out, but I have no intention of stopping anytime soon. Bloody slaughter never looked this good, sounded this good, or rewarded you so richly for mastery. For fans of co-op action this is a must-have, provided you can vault that initial hump to get to the real meat.