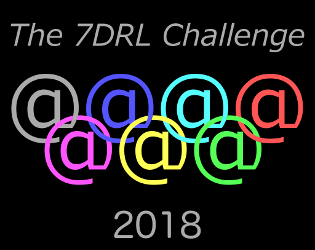 I’ve got another peek into the deadly worlds of this year’s 7-Day Roguelike Challenge, this time looking at downloadable games. This is a pretty varied bunch, not all of them as solid as the browser games I tried last time, but still worth experimenting with if you’re in the mood for an offbeat roguelike. Be sure to poke around the big list and let me know if you find any others deserving of attention! 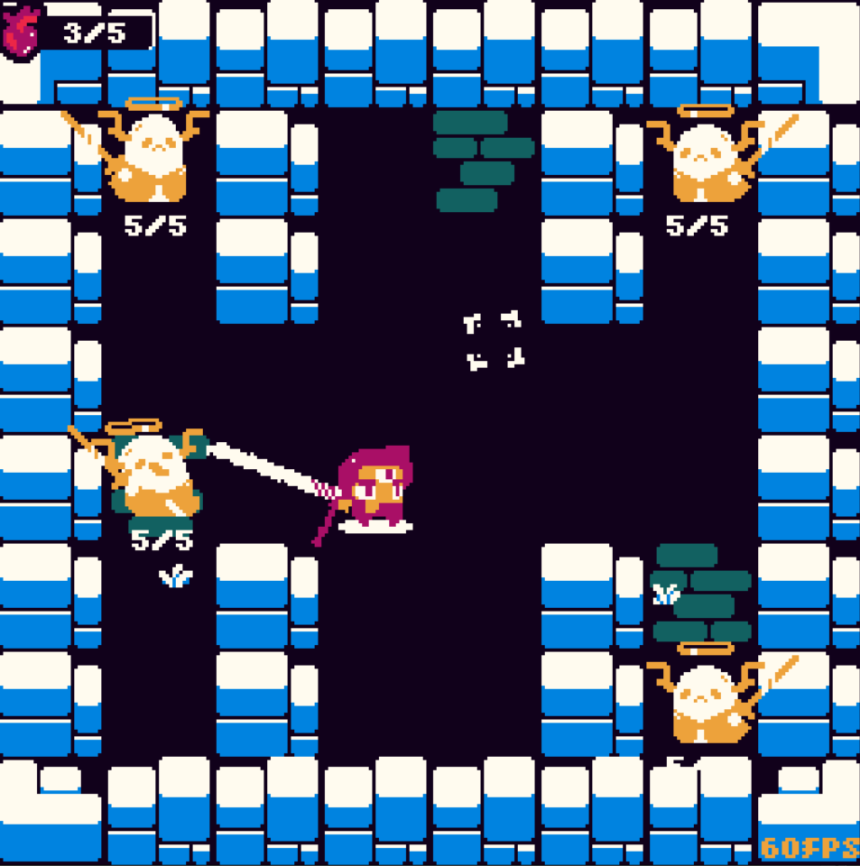 Taking familiar elements and boiling them down to a solid, compact experience can make for some very satisfying games, including this one. You play a three-eyed swordsman descending through a dungeon of demons to resurrect his king. Your only combat option is swinging your giant sword in an arc, knocking back any foes you sling it at. There’s enough strategy in maneuvering yourself around the two enemy types to get in hits without taking them, but every five levels you get to experience the titular deals. A demon will offer you a trade, and taking it will change your playstyle dramatically.

That’s no exaggeration, either. Some of the ones I’ve seen cut your sword length in half to do full 360-degree swings, slow your swing speed to do an additional point of damage, and make you move like molasses in exchange for instantly killing anything you hit. Even with powerful deals in your pocket this one isn’t easy, as you start with five hearts that do not replenish and your enemies can be tricky to combat. There’s only the two, the wildly-swinging melee one and the stationary ranged one, but considering the cramped levels you battle them on they can wear you down in a hurry. I managed to get to floor 18 on the backs of some powerful deals, and more than anything learning to work the melee system proved to be way more fun than I expected. Any mention of Spirited Away (my favorite Studio Ghibli movie) is going to get my attention, and Demon Bathhouse claims to be inspired by it. I can see where they’re coming from, as your blocky little person is lost in a maze of twisting Japanese bathhouse chambers occupied by strange, equally-blocky creatures. You need keys to exit the rooms you find yourself in, and each direction is color-coded so you’re unlikely to proceed in a single direction for long. Combat is either bumping or using your limited powers to hit tiles around you, but you must be strategic in your approach. Enemies will hurt you if you attack from the front, but red foes can be cooled down to blue ones in the baths which are sluggish enough to flank.

Despite the keen graphics the game is a bit limited on this front, as there are no animations whatsoever. I do appreciate the tactics involved in besting enemies, and in deciding which doors to open when, and coupled with the aesthetic it makes for a pretty memorable game. There may be some elements I haven’t explored either, like the purpose of the coins you pick up now and then. But even if it’s just an infinite maze it’s a unique one, both in look and feel. 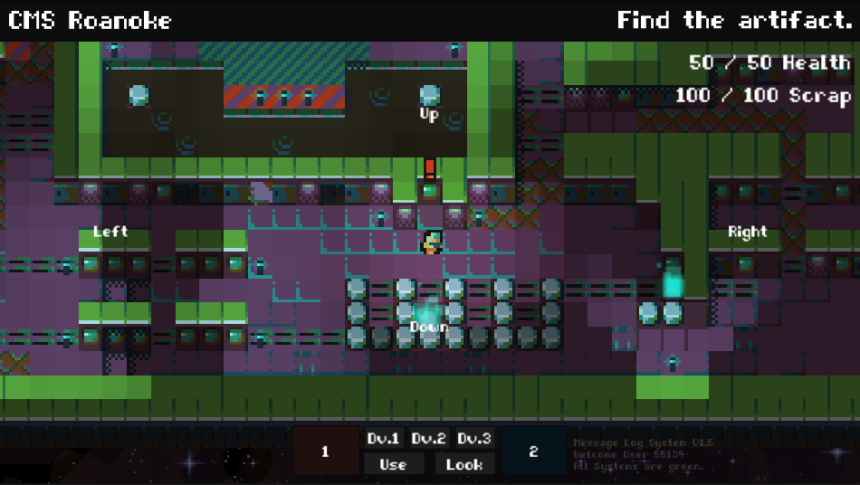 I have a weakness for sci-fi roguelikes, as they’re not all that common. Temporous brings with it a very unique look and feel as you scoot your little guy around his empty ship and yawning caves. You’re on the lookout for artifacts on the planet below but monsters are sure to get in your way, so you can bump them to death or sic your drones on them. Extra scrap can be used to build more drones so you always want to be moving forward. You’ll be doing that anyway to see more of the neat maps and bump along to the heavy soundtrack. There’s not a lot more to it than that, but I definitely appreciate the aesthetic at work. 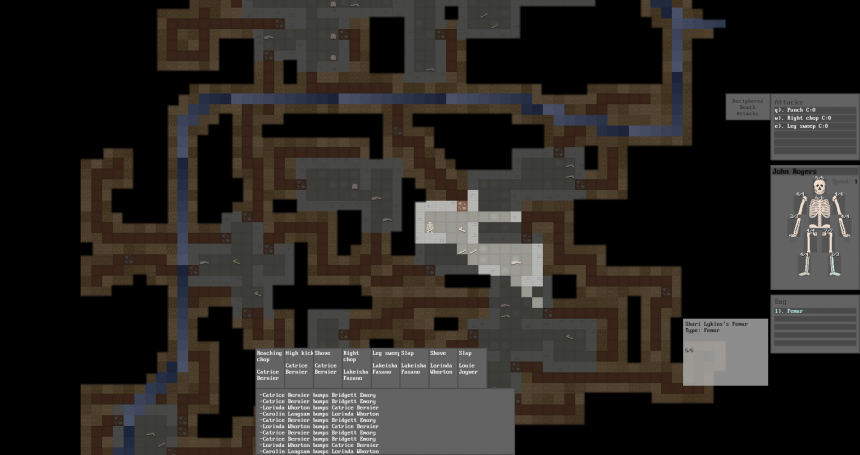 Here’s one I got a kick out of despite barely understanding how it works. You’re a living skeleton and you’re not long for this world, but you can beat other skeletons up for their bones and make yourself stronger that way. It’s got hints of IVAN’s weirdness, especially when the AI skeletons decide to throw down and break each other apart, and you can observe attacks to use yourself which target specific bones with specific other bones. I definitely struggled with the interface but it’s worth putting up with for the premier roguelike skeleton brawling simulator available. 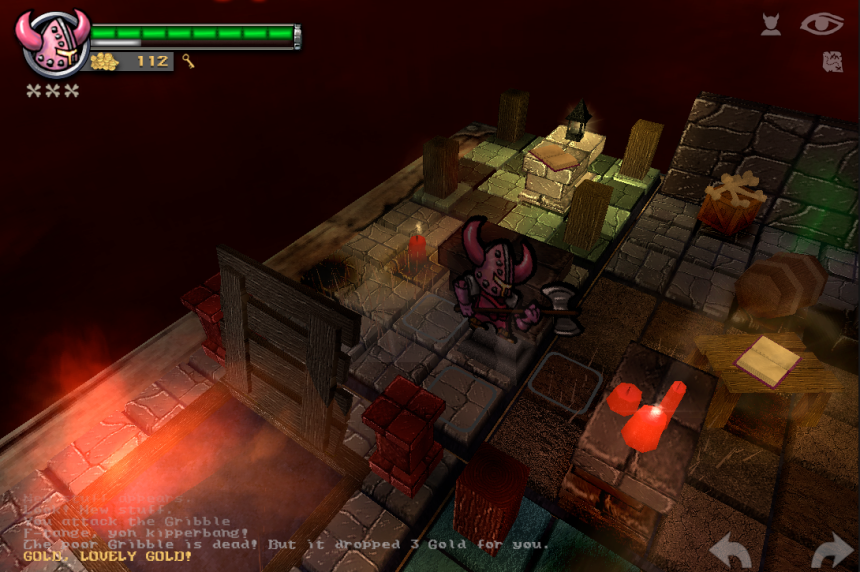 I had to try this one just based on the screenshots. You control a little cutout knight on a tabletop, which populates with new dungeon segments and enemies as you toddle around. The look is absolutely fantastic, thanks to a real attempt to make it imitate a toy dungeon of sorts. Combat is simple enough, as is collecting gold and food to keep yourself going. I found a trapdoor and a key to open it but couldn’t progress past that point, but just tooling around the board is good fun for a short while.