The Room had the impressive distinction of being one of my favorite games to simply interact with. As a puzzle game it was intricate and challenging, but as an experience it was something sublime. I would hope that a game about pressing buttons and twisting dials so delightfully would be followed by more of the same, and The Room Two definitely delivers on that count. But it also moves the formula forward a bit, not much but enough to stand as an actual evolution of the formula. And so long as I can keep hearing those delicious clicks and clatters, they can go whichever way they want with the series. 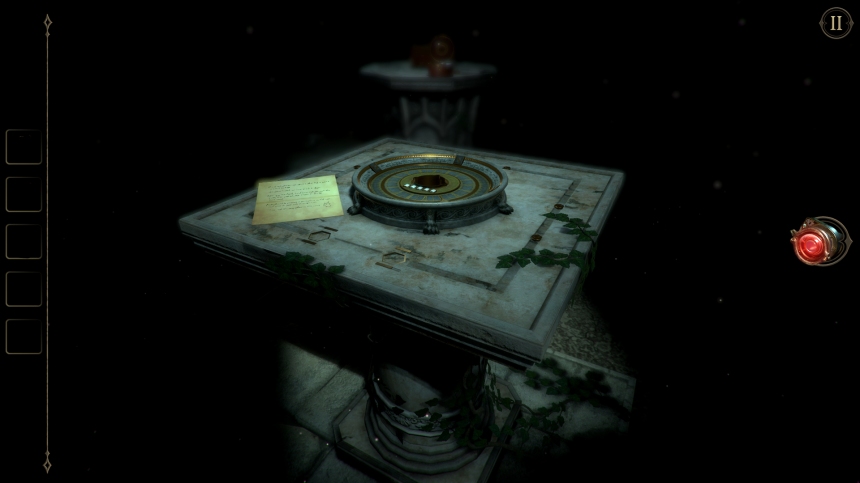 Following directly from the events of The Room, you find yourself in a darkened crypt with no obvious way out. Without spoiling too much you are lost in a sequence of locations tied together by the great and terrible power revealed in the first game. Obviously you want to get home, and a series of letters from an unseen ally will guide you through these oddly familiar places to your destination. The way is blocked, however, by complex assemblies of puzzle boxes, locking mechanisms, models, machines, and scientific devices. Everything is linked back to the force that has you trapped, however, and the conclusion of your journey promises to be even more dramatic than before.

Right away I should note that story and atmosphere play a larger role in The Room Two than in the previous game. Instead of working through the layers of a great puzzle vault, this one has you moving to entirely different locations for each chapter. From your original crypt prison you’ll tour a sailing ship, a temple, a parlor, and more. While you’re limited to focusing on just the parts pertinent to solving the puzzles they’re spaces with plenty of details and character, most notably a pervasive sense of dread. This title ramps up the creepiness from before, in accordance with where the story goes, so expect plenty of shadowy corners and things that seem just beyond your view.

This is the perfect setup to expand on the puzzles you’ll be facing, and the developers did not fall down on the job here. You’ll still focus heavily on locked boxes, hidden compartments, and ghostly visions by way of your mystical eyepiece, of course. But there’s a whole load of more unique constructions to interact with, including a model ship, a sailing trunk, a card table, and an electrical generator. All of these are rendered in the same loving detail, with levers and slots that click just right and moving parts that glide into perfect alignment. The tactile pleasures of the first game are just as present here, only now spread out across whole scenes of different gadgets to poke and prod.

Honestly it feels like every aspect of the game has been refined from the already-excellent first game, even down to the difficulty. The developers like hiding compartments in the most out-of-the-way places but here they seem a bit more logical and a bit more signposted, perhaps from lessons learned in the first game. It could be player experience talking too but moving around the environments seems to give more perspectives and opportunities to find what you’re looking for, and despite having more options I found myself stumped less often. And even if you do get stuck, the game still has its solid hint system.

It’s a rare thing to improve on as fantastic a game as The Room, but The Room Two comes through in spades. Everything you loved about the original is still here, but expanded to encompass new locations and new puzzles to tinker with. You won’t find it any longer than the first but that’s still two hours of the best button-pushing and dial-spinning you’re going to find. The added attention to story elements and atmosphere give it a different feel as well, without detracting at all from the puzzles at the core. If you liked the first game you’ll love the second, and all I can think about now is when the third might finally make it on to Steam.