“Arcade” is kind of a nebulous term in gaming, but to me it describes something designed to be played in short bursts and simple enough to pick up and run with anytime. A lot of games benefit from the arcade treatment because it makes them more accessible, and jettisons complexity and details for pure fun. In this sense Victor Vran is perhaps the most arcadey game in the ARPG genre, lacking much of the character-building depth in favor of getting you straight to beating the hell out of monsters. And I appreciated that for a time, but eventually came to realize that’s not what I look for in ARPGs at all.

Something is rotten in the state of Zagoravia, an absurdly Transylvanian burg overrun with beasties. Whatever is happening has claimed the lives of countless monster hunters, and obvious badass Victor Vran has arrived to sort things out. What begins as a self-serving quest to find a lost friend becomes a battle for the fate of the city and its few survivors, delving deep into the secrets beneath the streets and the connections with the worlds beyond our own. There’s only a few thousand skeletons, spirits, spiders, and other assorted monsters in Victor’s way, and luckily he has no shortage of methods to dispatch them.

This is all going to sound familiar to folks arriving here by way of Van Helsing or Grim Dawn or the other giants of the genre, so I’ll jump right to what’s different. Instead of a vast, interconnected world or grand journey, Victor operates out of Zagoravia’s royal palace and jumps straight to whatever part of the city he needs to kill things in. There’s a world map but it’s mainly for warping back to where you were in your quest, each area being a modest but open region to find entrances to new areas in. There tend to be big hub-ish areas with a handful of side areas and dungeons connecting to them, so most of your quests will simply be to reach whatever dungeon has the next piece of the puzzle.

It’s never a long hike but it’ll take you plenty of time, thanks to all the diversions to be found in each area. There are five challenges for every map in the game, everything from killing X monsters in Y seconds to finding secrets to beating bosses with certain weapons to fighting with certain hexes active. Those hexes are optional difficulty modifiers you can switch on or off when starting a map, offering a little risk and reward for folks who find the base game too easy. You’ll also come across plenty of secrets in each area, treasure chests tucked away from the beaten path that often require creative jumps (yes you can jump in an ARPG!) to reach.

Most of your time will be spent killing monsters, of course, and there’s a fair variety of weapons and gear to work with. You can have two weapons equipped at any time, including swords, scythes, mortars, lightning guns, and magical tomes. Each kind of weapon has two special attacks specific to it, and then coupled with the random traits and boosts you find on your gear you’ll have plenty of factors to consider when arming Victor. You’ll also find cards that provide passive bonuses, demon powers that can be used when your overdrive bar is full, and consumables to, y’know, consume. Armor isn’t a thing here, surprisingly, but you unlock outfits that change Victor’s playstyle a bit (usually with regards to overdrive). 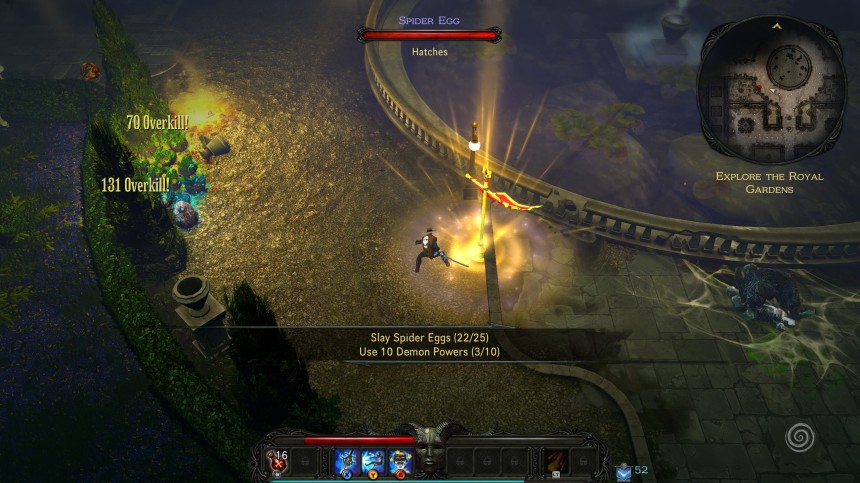 All of these factors combine to form a game with plenty to see and plenty of ways to do it, but no powerful driver to keep you moving forward. In other ARPGs the loot treadmill and leveling can carry the game even if the story doesn’t, but they’re both overly-streamlined if anything here. You’ll be swapping out weapons fairly often but not for anything devastatingly powerful or build-defining. And there really are no builds without skills to level or unlock, since leveling just gives you set bonuses. If you’re looking for pure hack-and-slash action you’ll certainly get it here, it’s just a far shallower experience than its contemporaries.

Having so little control over your capabilities also means no surprises with the combat. You can build some neat combos off of critical and overkill triggers but most of your hacking and slashing is going to be wearing down the same enemies the same ways. It can feel pretty uneven at times, with your standard attacks just chipping away at foes and then a sudden crit wiping them all from the board. The enemy designs tend to aggravate this point too, like how the skeletons have to be killed twice if you don’t overkill them and gargoyles can make themselves nigh-invulnerable on command.

Honestly the nits I have to pick at this game are simply because it didn’t end up being my style of game. Victor Vran is a fine lightweight ARPG, one that’s good for mindless hacking and ticking off challenges. That’s not what I come to the genre for, I’m in for grand journeys and diverse builds, but I can see the place this one has among the rest. It’ll last you a few dozen hours as well, and the sharp graphics and excellent controls deserve plenty of recognition on their own. If you want action with less investment and depth that most ARPGs offer, this one will absolutely do the trick.