I hate doing this. I hate finding a game with a unique look and feel, one with a concept I can really get into, and discovering that’s all it has going for it. I’m a child of the 80s and I’ve finally come around to loving its idiotic excesses of synth and hairspray, and Megamagic offers a bizarre fantasy world built upon just that. But it really is built upon just that, with no substance to keep it afloat in a sea of deeper, richer RPG offerings. I wanted to like this one so much, and I did until I literally ran out of things to care about in it.

Phoban is your average be-goggled orphan protagonist, raised by his uncle after his father made a demonstrably poor deal with demonic forces. Phoban and his brother are studying to be wizards at the local Order temple, a task made easier by his mysterious staff and blue puff creature left to him by his departed dad. Something’s up with said puff, though, and when the head of the Order demands Phoban turn his buddy over the two flee, sowing all kinds of chaos with marauding zombies and punks and enchanted wildlife. If he’s going to get out of this mess, he’ll need to unravel the mystery of his ephemeral companion and the deeds of his father so long ago.

The setting is what’s so special about Megamagic, a sort of high-functioning Fallout wasteland thriving in the wake of a comet that smashed neon magic into the Earth we once knew. Your adventure starts in perfectly normal suburbs, ringed with electro-magical barriers to keep the undead out. From there you’ll journey to forests of sentient plant life, ruined temples to unknown deities, and deserts populated by the nicest Mad Max extras you could hope to meet. It’s all faithfully 80s as fuck, from the delicious synth soundtrack down to the denim jackets and neon trim on all the characters. 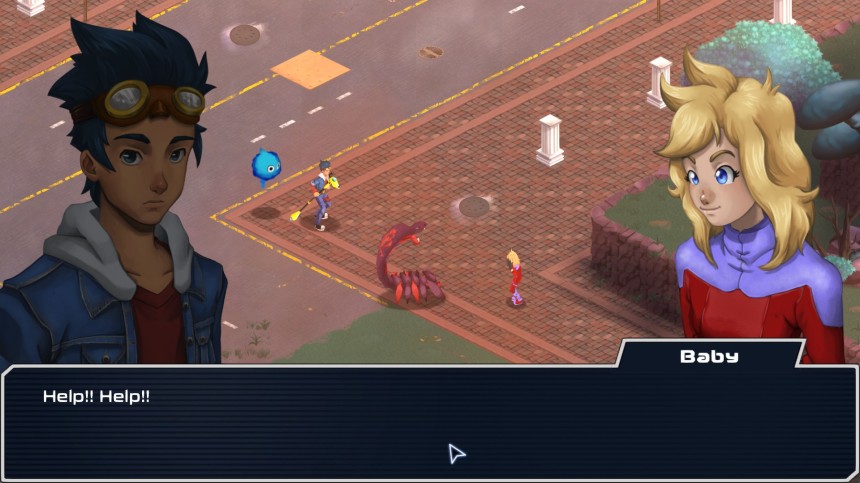 Most of your time will be spent wandering this colorful world at a brisk pace, talking to folks who are both snappy and unusually aware of the video game mechanics surrounding them. Cleverness aside, the writing is pretty good when you can find folks to have real conversations with, but that only happens when following the main plot. The rest of the time you’ll be fighting things using your two kinds of spells. Your active spells are a set of 4 selected from 20 you unlock and craft over the course of the game, everything from bolts of neon energy to mystical mud puddles. You also summon grims, monsters magically tamed to serve you Pokemon-style to even the odds in fights and serve as puzzle tools when faced with pressure plates or locked doors.

Combat is functional, but your own spells are remarkably weak which leaves you supporting your grims with shields and status effects most of the time. There’s no way to level up your spells either, so for power boosts you just have to wait to find the next unlock. There’s no gear, either, or consumables or collectibles to find. You’ll find chests to blast open but they just have crafting materials for your spells. No rewards means no side quests or exploring to do, so all you really need is to follow the quest markers to the next cutscene or battle. You can’t even talk to most of the NPCs, and the ones that do speak just give boring tips about managing your grims.

I hate to say it, but in the end Megamagic is all style and no substance. I kept waiting for something new to do, something new to find or work towards, but it’s just you and your quest. No amount of kitschy writing or throwback art can make up for boring battles and aimless wandering, despite how much I appreciated them. I enjoyed Megamagic when I first sat down with it but that enjoyment bled away fast as the lack of depth became apparent. Eventually I reached a point where I was avoiding starting it up again for this review, and now that it’s written I have literally no reason to ever revisit it.