There are a lot of ways to approach competition in ARPGs, but Depths of Peril came up with perhaps the most unique. The looting and questing you do here isn’t preparing you for a final battle against some great evil, but rather for crushing your allies and asserting your dominance. It changes the entire landscape of the game, taking emphasis off of simple leveling and gearing and puts it on making strategic decisions about when to set off, which quests to accept, and how best to use your resources. It can be a very compelling game, but it’s likely not many people will see that given how stiff and challenging the moment-to-moment action can be.

You run a guild of adventurers in Jorvik, a rough frontier village of barbarians. Beasts and monsters and all manner of evil are threatening to overrun the place, and your guild is there to take on quests meant to keep them at bay. The thing is, you’re not the only game in town. Other factions of adventurers are out there right alongside you, checking off quests and hoovering up loot that could have been for you. As I mentioned before your goal isn’t to crush the forces assaulting the city, but rather to grow in power and influence to crush your competitors, establishing you as the de facto ruler of Jorvik.

The tutorial does a decent job of introducing you to this unusual premise, sending you around to the different vendors and questgivers you’ll be making your bones with. There’s a ton of systems at your fingertips right from the start, and ones that you won’t find in any other ARPG either. You have relationships with other factions to manage, crystals and bookshelves to arrange in your guildhouse, and a surprisingly open skill system with five pages of talents you can freely invest in as you level up. You won’t have to worry about all of these from the start, of course, but in games of this nature it can be hard to recognize what is and isn’t important, especially if you start sliding down the power scale.

Regardless of how well you grok the systems you’re going to want to head out and kill monsters, and this unfortunately is perhaps the weakest part of the game. Depths of Peril is dated as hell and not exactly big-budget, and it shows in how stiff and canned all your animations are. Maps are also terribly cluttered with scenery which makes it hard to see where you’re going and impossible to see some item drops. But worst of all is the enemy spawns, which loves to produce a dozen or so monsters in tight formations that all descend on you at once. Battles are not going to feel very manageable for the first few hours, and you can expect to burn plenty of healing items on just surviving basic combat.

Once you start ticking off quests and gearing up some of these gripes start to fade away. It’s never going to be a smooth or polished experience, mind you, but the depths of the systems involved give you plenty to focus on instead of the goofy animations or weak combat. Learning how to influence other guilds and switch to war footings against them is quite interesting, and presents a very different challenge from conventional ARPGs. You can carry on questing and following treasure maps and such for a good long while, of course, but it’s the diplomatic aspect that’s an actual selling point here. 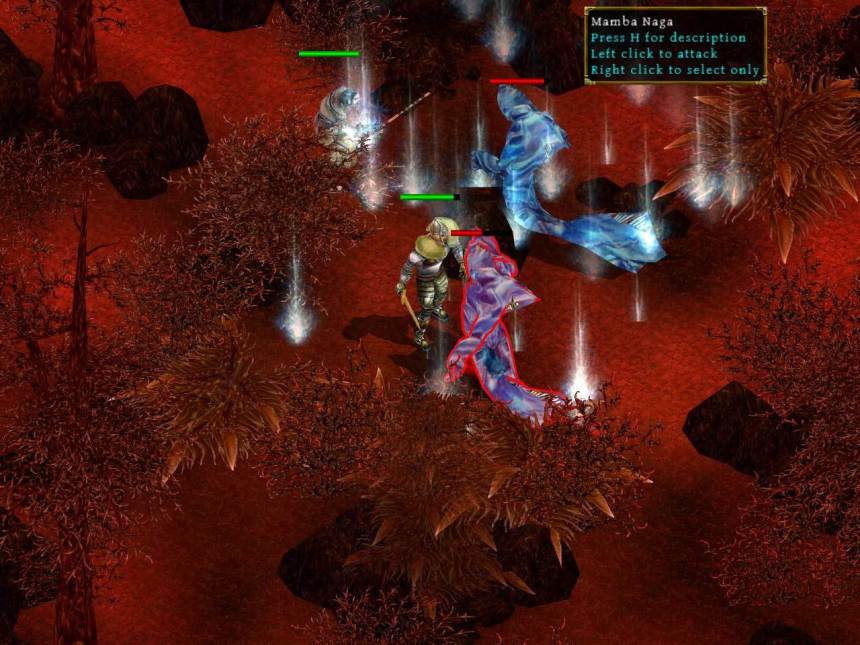 It’s hard to recommend Depths of Peril without some large caveats, but the concept is so unique I’d say it’s worth experiencing. Definitely don’t show up for the combat or the story or the graphics, as this is about as indie as you can get on all three fronts. The concept is also fleshed out more in Soldak’s subsequent games like Drox Operative, so I wouldn’t consider this an essential entry in the franchise either. But it’s strange and engrossing and works well enough to keep me hooked for a few hours, and if you give it a chance maybe you’ll get similarly sucked in to its weird little worlds.