The starship command genre is a tiny one to begin with, so expecting any overlap with disparate genres like ARPGs is foolish at best. And yet we have Drox Operative, a wholly unexpected merging of Diablo-style looting and progression with space combat and starship design. That’s enough of an accomplishment on its own to be notable, but the free spirits at Soldak Entertainment didn’t stop there. As with their other titles you’re not battling or questing to defeat a singular threat or advance a story. Instead, all your fighting and looting is to determine the fate of the active and dynamic interstellar empires who contract your services. And it’s just as engrossing as it sounds.

You’re not going to get a lick of background info inside the game, but the title refers to an ancient empire called the Drox who trained a legion of starship captains to work as super privateers of sorts. They would support colony worlds, participate in wars, facilitate trade and diplomacy, and do all sorts of other Star Trekky work around the galaxy. The Drox are no more but their operatives live on as an independent guild of mega-mercenaries, single starships with the power and initiative to determine the fate of the galaxy. That’s where you come in, as the captain of a ship that’s free to ally with whomever you want, fight whomever you want, and take whatever you want.

Every game of Drox Operative generates a random sector of galaxy with anywhere from three to six empires in it. These are fully-functional space factions like you would play against (or as) in a 4X game like Stellaris or Master of Orion. They’ll colonize new planets, go to war with each other, build new ships, trade goods, and do what it takes to expand their territory. You don’t play as them, of course, but rather as a little mercenary they offer quests to and trade with. Your job, then, is to maneuver yourself into a position of power by allying or warring with these empires. There are several ways to win, including whittling down the factions to one, forming an alliance under your command, and buying everyone out with overwhelming wealth. But it’s not quite as simple as just doing a lot of quests, as I ended up having to cancel several because the planet I was contracting with was destroyed while I was away. 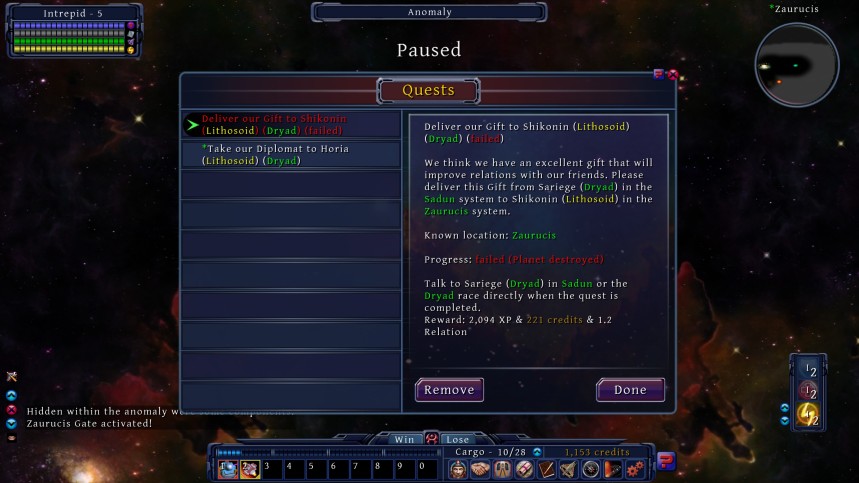 So right there you have an incredibly unique premise, working as the non-aligned hero determining the fate of a dynamic, ever-changing galaxy. The missions you complete, trades you make, and diplomatic pacts you enter into have significant effects on all the factions in play, but they’ll also war and expand without your input. And sometimes that’s the best course of action, because there is the whole ARPG side of the game as well. You guide your ship around big, open solar systems in search of planets to survey, space junk and derelicts to salvage, and enemy ships to blow up. There are plenty of independent aliens and pirates to explode for items and experience, and plenty of reasons to explode them between quests and faction support and loot.

The combat is straight-up delightful, thanks in part to how smooth and intuitive it is. You move with either mouse clicks or WASD, and attack with mouse clicks or the number keys. You can have as many weapons on your ship as you can fit and each gets its own hotkey, though early on you’ll be limited by mount space. Interestingly your captain gains experience and gets skill points at new levels for a sci-fi take on the Diablo stat system, pumping up Structure and Computers to allow for new equipment and boosting hull or attack values. Of particular note is the Command stat, which straight-up gives you new ships with more mount slots for components like engines and reactors and escape pods at certain breakpoints.

It still has hints of low-budget origins, especially in the quaint sound design and simple ship graphics. But Drox Operative accomplishes something incredible by combining two genres and reaching remarkable quality with both. The ARPG action is simple and visceral enough to really dig into, while the simulation layer gives you plenty to do and plenty of ways to do it. Unique games like this should be celebrated for daring to go off in new directions, and this particular experiment deserves twice the accolades for succeeding in just about everything it sets out to do.