Hidden object games are almost universally cheesy, and that’s not really a knock against the genre. Being the casual fare that they are you generally wouldn’t want something that takes itself too seriously, but at the same time you don’t want something painfully camp either. The real gems are the ones that hit the sweet spot between camp and charm, and this one lies squarely in that area. The Secret of Serpent Creek embraces its B-horror roots to present a story with monsters and murders with as much fun as it can muster, throwing up goofy jumpscares and bizarre puzzle logic that for once feels right at home.

Your pal Helen Hunter wandered off to the coastal town of Serpent Creek to investigate their odd traditions, leaving only a panicked plea for help behind. Lucky for her, you’re an accomplished paranormal investigator so unraveling the mystery should be child’s play. The darkened town is winding down their snake festival but killers and quakes abound, tearing up both the populace and the roadwork and making your job that much harder. There are plenty of scenes to hunt through for random items, though, items that will come very much in handy when trying to cross a chasm in the street or get a doorbell working again.

Right in the first five minutes of the game, you’ll be accosted by a shadowy creature and meet the most obviously disguised villain in history, both played completely straight. Serpent Creek is chock full of bodies to discover and monsters to ward off and the treatment feels so much like the classic 80s monster movies stations would show late at night. Your avatar will never get too rattled by anything she meets, no matter how deadly, and the campy characters and their hilarious voice acting only add to the charming atmosphere. The game benefits so much from embracing its inspiration, making it even more of a light-hearted romp than purposefully serious or silly titles in the genre. 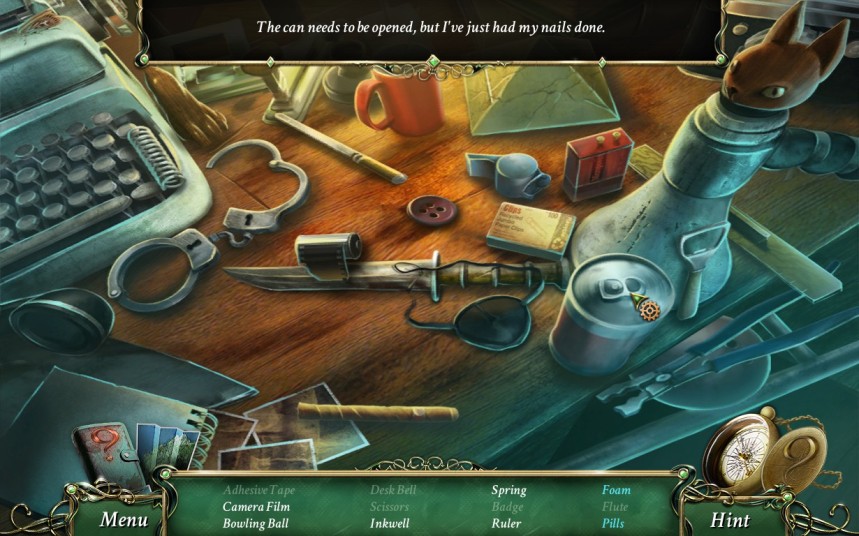 Atmosphere is nothing without solid gameplay, of course, but 9 Clues does not disappoint here. It’s a standard HOG, full of static scenes to ply for items and puzzles and object scenes to snatch random garbage from. The series namesake gives it an extra feature though, investigations where you have to find 9 pieces of evidence to reconstruct a crime. There are also recurring puzzles like lockpicking that lend a small air of cohesiveness to the gameplay. Other puzzles are quite standard matching or pathing challenges, none of them very challenging. Neither are the hidden object scenes, posing only 9 items for you to find per scene and making them large and clear enough to find just by clicking at random. Easy puzzles aren’t a real knock but you’ll have to revisit every hidden object scene at least once, which makes them even easier and introduces some irritating backtracking.

That and some rough adventure game logic like needing a knife to open a soda can so your nails don’t break are the only nits to pick with this one, really. The hand-drawn art is colorful and expressive, seemingly pulled straight from a classic Goosebumps cover. The sound design is up to the task as well, and the whole thing will take you around three hours or so to work through. It’ll be a riot the whole time, too, chasing murderers and snake people around this strange little town while collecting gears and gems to open overcomplicated doors. This is one of the rare times that the atmosphere of a hidden object game really meshes with the quality and presentation, making the most of its B-horror origins to engage and delight.