I think everyone has played at least one game that tried way too hard to be funny. For me, that’s something like McPixel or Retro City Rampage. Shower With Your Dad Simulator 2015: Do You Still Shower With Your Dad is the opposite of that, a game so earnest about its uncomfortable, almost-homoerotic premise that you can’t help but like it. The game commits to it as hard as it can, focusing all 6+ of its modes entirely around showering with your dad. And remarkably, beneath the polished madness of its presentation, is a solid and often surprising game. 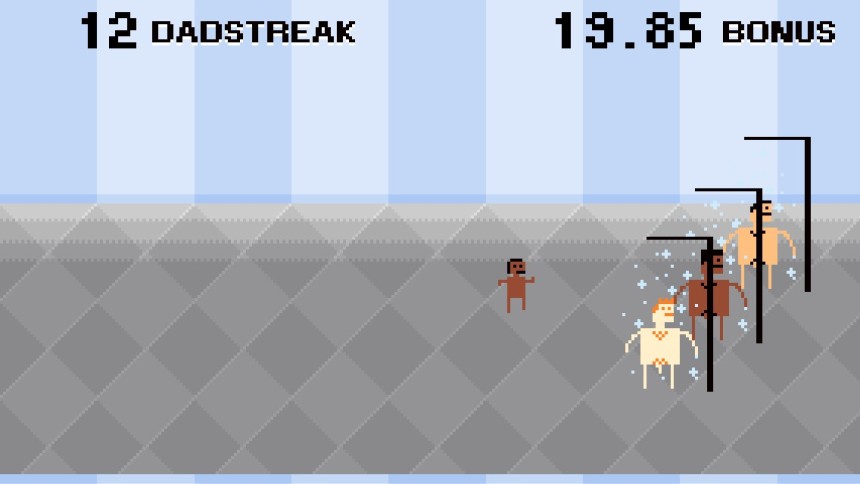 SWYDS2015:DYSSWYD is a collection of minigames only slightly more complex than a WarioWare microgame. You start with three unlocked, and can unlock the rest by playing the game though the means by which you reach them are mysterious and delightful on their own. The first mode, Endurodad, has you playing one of three children in a timed search for his depurating (yes I used a thesaurus for that) father. Controlling the tot with just the arrow keys, you run him right into his dad to earn extra time and build your Dadstreak. If you hit the wrong dad, showertime ends. Every time you tag the right dad, the assorted bathers and obstacles are re-randomized, making it a hectic dash back and forth through the shower room. There are wet floor signs that slow you, puddles that send you skidding away, and more and more dads to confuse you as you go.

The second mode, Dadathlon, is similar, except every time you find the right dad you switch to a different kid, and each individual search is timed. Finding the wrong dad only gives you less time on the next search. Both this mode and Endurodad have very steady difficulty curves that you can overcome with time. There are also power-ups to unlock such as soap, beer, and rubber duckies, but I would be lying if I said I understood what most of them did. They certainly spice up the gameplay, which is enough for me consider how solid the basic gameplay is to begin with.

The third mode, Dad Divisions, is a pretty big departure. Instead of freely scooting around the showers, your child is stuck running left and right, catching falling showering dads. Mouse click extends his naked arm in bionic fashion to snatch dads from the air, and the up arrow changes what kid you are so you can match them to the right dad. It feels like an intense puzzle game and makes a nice break from the other two modes. There are more modes beyond these but I’ll not spoil them for you, for their discovery is a major reason to play the game at all. I will say that while they offer dramatically different gameplay, they have certain flaws that the base three modes do not suffer from. Still, the process of finding them and the variety the offer add a surprising amount to the overall package. On top of all that, there are some microgames that randomly pop up in between rounds that can range from quicktime events to… stranger things.

Shower With Your Dad Simulator 2015 is a denser package than it appears, with its many modes and secrets easily lasting you several hours if you let it. The presentation only adds to the charm, being a weird cross between 8-bit homage and Hotline Miami visual weirdness. Every game starts with a dad joke, and the low-res genitalia cannot and will not be censored (seriously, try it in the options). Unless you really are that turned of by pixel dongs you owe it to yourself to try showering with your dad, because this is the rarest of games: one that is built around a single joke and makes it work.