We’re wandering away from the clutches of Curator Connect once again this week, looking at the output of two very indie studios. Nickervision Studios produces some simple little arcade games that all have their own mechanics and scores to chase, while Wastebasket Games does what they can to recapture the magic of the NES era. But are their games worth your valuable time? Only several pages of words can tell… 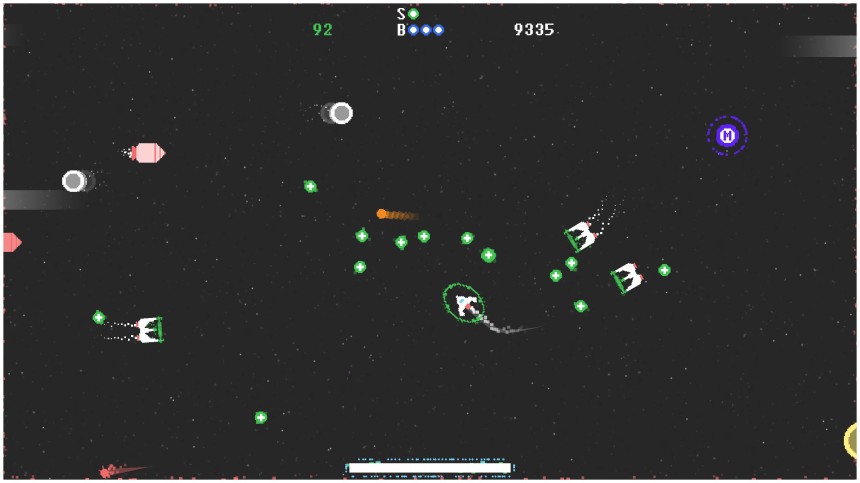 You’ve got a corner of space, it’s filling up with dots and spaceships, and you gotta clear them out. That’s about as much story as I can wring from this one, because it’s really just a simple score attack game. You pilot your ship around the screen, shooting anything that drifts into your space and collecting powerups and ammo. There’s an odd combination of mechanics at work here, namely your ship never stops moving forward and all of your weapons (even the basic one) have ammo counts. For the former point you can speed up and slow down, but managing your space without running into anything or going off the screen and dying can be a challenge. For the latter every enemy drops ammo when they die so it shouldn’t be a concern, really. Every few enemies you’ll get a coin used to unlock other ships with different stats. The graphics are simple and clean and the soundtrack is bangin’, though the sound effects fall pretty flat for me. Overall though, it’s a great little shooter for short sessions.

I doubt it’s much of a struggle for the Earth to keep orbiting the sun, but Orbt XL might give you another impression. All you have to do is keep your chosen planet happily swirling around a yawning black hole, and it only takes one button to do it. Your button press pushes the planet higher in its orbit, while not pushing anything allows it to decay towards the black hole. Other planets of all shapes and sizes are being gobbled up too, so the challenge is weaving your orbiting world through the planetary rains until something inevitably smashes you to dust. The points you earn can be spent to unlock new planets, but that’s honestly it. I love the look, the sound, and the basic gameplay loop, but it’s just that, basic. Don’t expect to kill hours in this one, but definitely pick it up iif you need something just challenging enough to keep it out of full casual mode.

“Diamo” probably refers to the diamond shape you scoot your little piece around, or maybe your diamond-shaped piece itself, or maybe the diamond enemies, or maybe the diamond bits everything shatters into. Whatever the case it’s diamonds all the way down, propping up an incredibly simple game. You move your piece along the grid lines, and when you complete a shape it lights up. Complete all four triangles that make the diamond, and you score big points. The enemies that go sailing past the grid are your biggest threat, because once you start moving along a line your two speeds are fast and faster. The controls also leave a lot to be desired, requiring you to press in the cardinal directions to speed up your piece rather than the direction it’s actually going in. Coupled with just a few minor unlocks, there’s not really enough to Diamo XL to recommend. 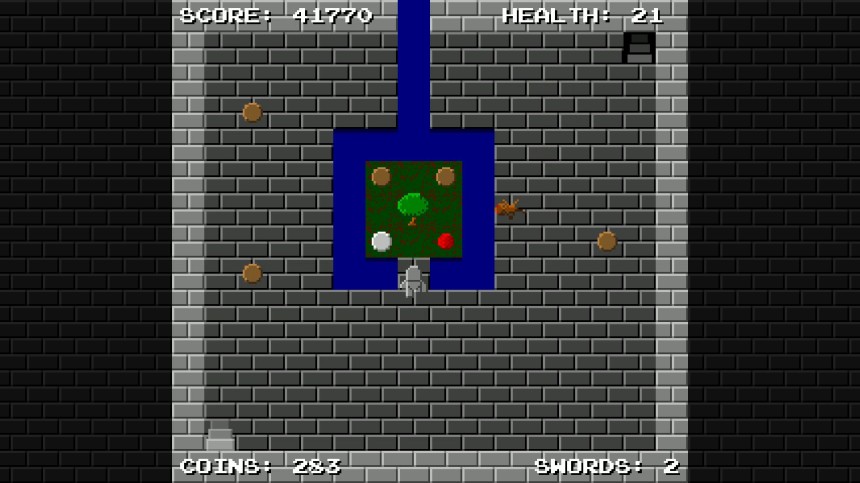 I get the nostalgia for the NES era, I really do, but it’s important to remain honest about what worked and what didn’t for those games. Titles with really loose controls or poor hit detection didn’t fare well even then, and they still don’t if Broken Armor is any indication. Your little knight character has been disgraced and exiled from his land, and only by bringing back the lost grail from within a sprawling dungeon can he redeem himself. Each floor is a simple square with walls and water and enemies to contend with, and coins and weapons to pick up on the way to the exit. Weapons are thrown however, so harbor no illusions of purging levels of foes. The real killer here is exactly what I mentioned, poor controls that send you sliding around everywhere with no real precision, and frustrating hit detection with no invulnerability period. That means a basic bat or pool of water can grind you down to dead in an instant. If it were prettier or sounded better I would be more inclined to stick with it, but for now it seems another casualty in the war to bring back the olden days.

I’m a little surprised there aren’t more attempts at Zelda-style games out there, but I suppose the actual series has done enough to evolve and iterate over the years. That leaves us with titles like Shotgun Legend, obviously a love-letter to the 8-bit days of adventuring, right down to the structure. Eugene was abducted by aliens and transported to an alternate world of monsters and dungeons. His hubcap broke in the excitement and he’s convinced collecting all the pieces is his ticket home. With his trusty shotgun, he’s ready to blast his way through hordes of monsters and back home.

Seriously, this is OG Zelda with a shotgun. Said gun actually makes a pretty big difference in combat, since it’s a spray of pellets. If all of them connect you’ll drop your foe like a sack of bones, but whiff with any and it’ll be more like a light tickle. It’ll take some getting used to, and be prepared for some painful enemy placements to steal life away while you’re coming to grips. Still, the heart of the game is solid and does a fine job of carrying the old Zelda torch. There are maps, side weapons, health containers, and everything else you’re expecting, just with a little less polish.