Usually when I write a review, I start with all the good points and transition to the bad stuff. It seems like a more fair way to present information and makes the reading experience a positive one. But we’re not going to do that here, because the one thing you need to know about Lichdom above all else is that it is too damn long. I don’t mean in terms of time, either, because one playthrough will last you about 20 hours. However, those 20 hours are stretched over just eight levels, and three of them are simply continuations of the previous levels. There’s a lost city level, two ice levels, two desert levels, two swamp levels, and a proper city level. With each of those lasting 2-3 hours, you’re going to be wandering through seemingly endless stretches of glacier and sand and muck.

It’s not just that either, because the level design contributes heavily to the insane drag. This is mainly an arena shooter, where you wander until you hit a big open room and then get stuck there as you splatter waves of enemies. Outside of these brawls there are no puzzles, no doors, no interactables, almost no alternate paths, and very little reason to explore at all. There are some side fights and usually one or two secret dungeons that can get you valuable piles of spell components, but in terms of gameplay you’re just getting harder versions of the fights you’re doing normally. All this means that what you get in the first two hours is what you’re going to get times ten, with arguably even less variety as you progress.

I’m beating you over the head with this because it’s a huge, potentially game-breaking flaw in an otherwise tremendous title. If you can get past the monotony of the prodigious levels and battles you will be treated to a vibrant, action-packed magical brawler. There are no swords or bows, just spells that do exactly what you want because you craft them yourself. Over the course of the game you’ll unlock eight sigils which determine the spell’s base, including common elements like fire and ice but also more curious concepts like corruption and delirium. Each sigil has three spells attached to it, and you can have three sigils ready to cycle through at a time. There’s a targeted spell that can be built as a homing missile, a bomb you lob, or a channeled beam. There’s an AoE spell that can be an explosion, a pool, or a trap that must be triggered. And there’s a nova that has conditions for triggering it depending on your shield, which itself is a craftable defense that determines how you can block and teleport.

And we haven’t even gotten to the spell effects! Your attacks can be direct damage, a status effect, or a damage multiplier, which also varies in its function by sigil. Fire spells can knock down and burn over time, lightning spells can stun and chain across enemies, delirium spells can mind control and make enemies flee, and so on. Spells can critically hit for additional effects, or be charged before casting for a guaranteed crit. Charged spells can do a special crits charmingly named “apocalypticals” which give you a bonus effect based on the inflicting sigil. You can craft special synergy spells that use two sigils instead of one and have awesome room-clearing effects like collapsing black holes or summoning exploding zombies or conjuring a hurricane. All the parts to make spells drop as Diablo-style tiered loot with different stats and effects, meaning you can spend a huge amount of time just learning the crafting system and making immensely powerful spells. 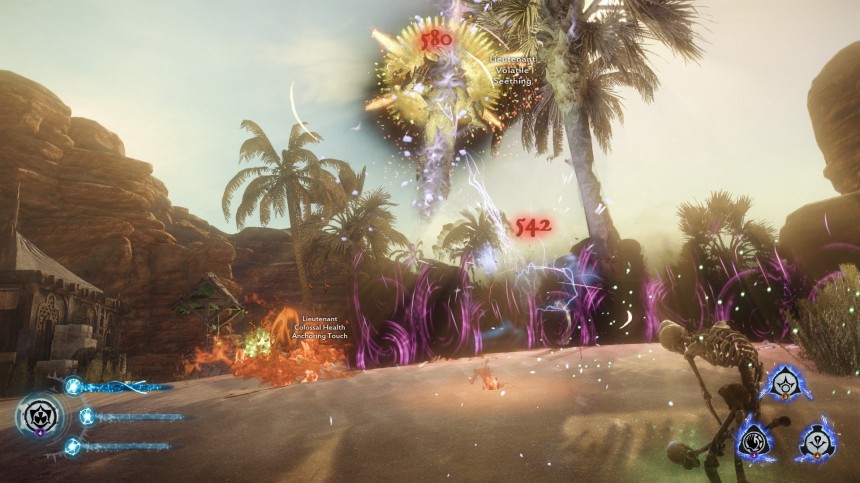 You’ll need them to get through the thousands of enemies standing in your way, too. Your foes are a motley bunch of cultists and demons with some very creative designs and fair variety of attacks. They tend to have a lot of health, too, but this can be overcome easily with proper spell design and coordination. And there’s nothing quite as gratifying as catching a bunch of skeletons in a gravity well, freezing them, and then blowing them to hell as you dance around the battlefield. The scenery for the action is lush and detailed as well, which helps make the long slogs through levels at least look interesting. Some of the setpieces are actually pretty inspired, and one even made me gape when I realized what it was.

The story could help serve as a motivator, but the real stars here are the voice actors. You get to play as Troy Baker or Jennifer Hale, and whichever one you don’t pick becomes your chatty NPC traveling buddy. They’re constantly sniping at each other with witty jabs, cursing like sailors and proclaiming their greatness. Your mentor figure is Clancy Brown (swarthy Lex Luthor from the Superman cartoons!), and the villains and side characters all turn in quality performances that admittedly veer more towards traditional fantasy. I will say that the plot does something dumb in the swamp levels that cuts into the voice acting fun quite a bit, but by that point you’re probably just trying to power through to the end.

I’m not going to lie, I love Lichdom: Battlemage. It can be a hard game to love, because there really is too much of it and I was starting to burn out on it halfway through. But the magic crafting and giant, chaotic battles kept me going, and I’m glad they did. If you can beat the game there’s a cool New Game Plus mode with randomized challenge maps (that really should be unlocked from the start) so if you can power through there’s a more fitting way to enjoy the combat. With a game like this though, you really just have to give it a chance. I don’t normally talk about price but pick this one up on sale for like five bucks and give the first level a try. If you’re cool with more of that for another 20 hours, then enjoy depopulating a faraway kingdom with fire and locusts and zombies and time rifts. Forever.