A lot of games that shoot for surreal atmospheres miss the mark, because it’s not that easy to defy the boundaries of reality. Dogolrax succeeds in a way that I’m not entirely sure was intentional, because it seems to dance all over the line between surrealism and satire. From the moment you start it up you’ll be thoroughly lost in a world of grisly monsters and mechanical horrors that comment about your gaming prowess and their porn browsing history. It’s the only game I can think of where I’ve cut myself down from a rope with a cleaver in someone else’s head and then crawled broken into a monster uterus to be reborn, and if the actual game part played better that would be a hell of an achievement. 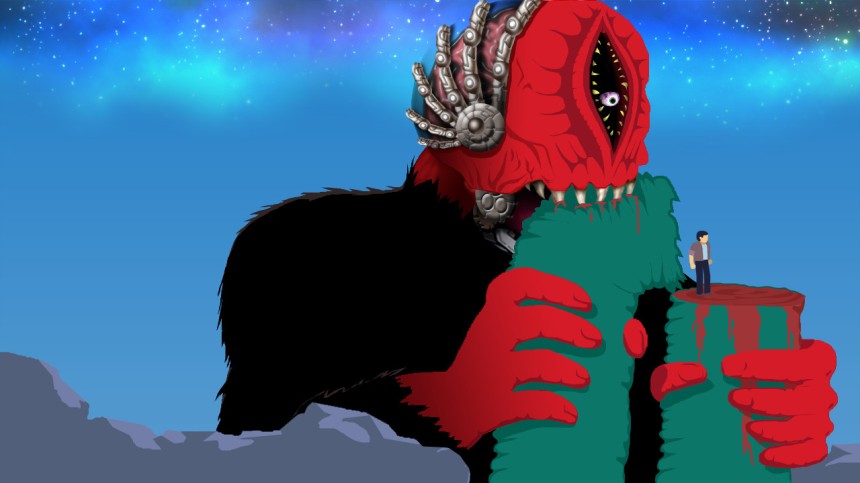 I considered outlining the first few minutes of the game here but it’s something you really should experience for yourself. There are dreams, carnivorous aliens, a vagina elevator, arcade machines, and a big-breasted anime girl that mix in ways you are definitely not expecting. It only gets stranger from there as you make your way through the ravaged bodies of enormous, living creatures to battle monks and priestesses that look like they were private commissions from DeviantArt. The story will make sense eventually but like I said it’s half-satire, so anyone showing up for serious horror or intrigue is going to be turned off. And so will the folks looking for anime boobs, just so you know, because they’re not the focus you might be expecting here.

What Dogolrax is is an adventure platformer in the vein of Out Of This World. Your hapless protagonist is just some dude, trapped on a planet that defies his attempts to make sense of its gruesome ecology. You’ll have to do a fair bit of experimenting to figure out what’s safe and what isn’t, what’s a door and what’s a deadly maw, and so on. It’s not a world you have to learn the rules of, though, because the challenges change constantly and most of your time is spent running from one scene to the next anyway. There are significant changes of pace to expect though, including side-scrolling shooting sections, swimming sections, and other more esoteric obstacles to overcome. 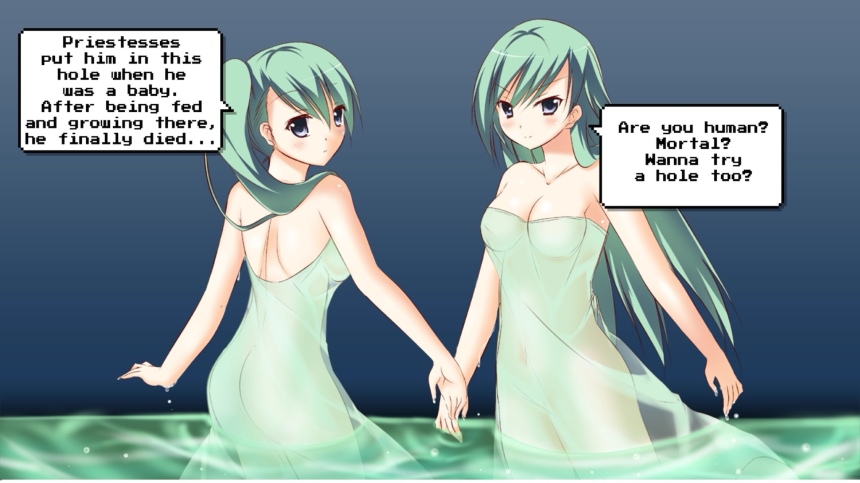 Grab-bags like this can make for compelling experiences, but unfortunately Dogolrax is cobbled together with what feels like the lowest possible level of design skill. Your controls are unthinkably inconsistent, giving you tight turn-on-a-dime action on one screen and greased-shoes-on-ice pratfalls on the next. This carries over to the other game modes, where some might have pixel-perfect movement and others have momentum-based messes to struggle with. Hit detection is just as messy, with hitboxes for everything significantly larger than they appear. This can be infuriating in sections with spike-lined walls or randomly-ricocheting balls of death, and doubly so in the game’s many inexplicable Breakout-clone levels.

If bad controls are a dealbreaker for you, then by all means stay away from this mad ball of blood and offal. Normally it is for me, but the developers have made certain allowances for it that helped me get through the full 90-minute adventure. Most areas with any sort of challenge have easy and hard paths, and both tend to be very generous with checkpointing practically every screen. There’s at least one awful sequence where you have to ride a melting mutant through an acid bath that will straight-up let you skip ahead if you die too many times, a feature I was all too happy to make use of.

It feels cheap, looks a mess, and can’t decide if it’s body horror or bad satire, but I’d be lying if I said I didn’t enjoy it. The weirdness is just intense enough to keep surprising me every couple of scenes, and the bizarre story concepts hooked me into seeing how the whole mess ended. The gameplay is borderline terrible, but not bad enough to keep you from powering through and seeing more twisted mutants and inexplicable anime girls. Its story and themes may be inscrutable, but they’re the kind that shock and entertain and that’s enough to earn a nod from me.