Review: Jimmy and the Pulsating Mass

I respect attempts to bring back classic genres, but I’m always wary of them as well. JRPGs in particular went through some ugly phases where balance and pacing were all over the place, so inspiration can very much be taken from the wrong places for a revival. Jimmy and the Pulsating Mass has its heart in the right place, drawing heavily from solid RPG classics like Earthbound and stranger places like Yume Nikki. But it suffers from antiquated balance that can be hard to stick with, and on top of that lacks key narrative elements to help players make that commitment. 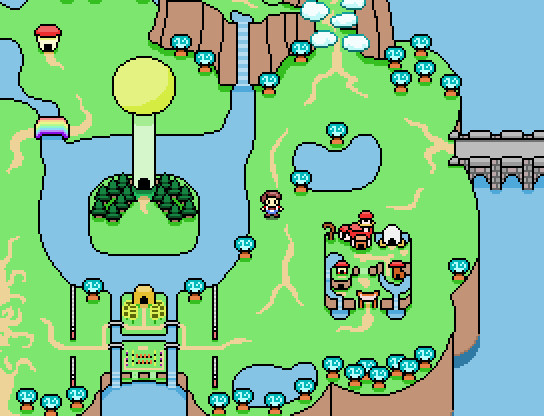 Lost in a fanciful dream of sun-touched fields and talking animals, we find young Jimmy and his eclectic family. Mom and Dad have tucked away for some adult time, leaving Jimmy and his jerk-ass brother Buck to fetch some honey from the bee kingdom for a cake. Their journey takes a turn for the worse when they find the bees taken by a dark and disturbing presence that is slowly permeating the idyllic world. As the situation deteriorates, Jimmy has to pull his family together to resist the madness before it costs him his dreams and his sanity.

The net result of this premise is a bright, cartoony world of talking animals and aristocratic instruments, where you can infiltrate a network of ignorant goons and punch your way to the top or give tiny muffins to tiny mice to make friends. It’s a silly place, full of genre-savvy quips and exaggerated personalities. But there’s also a deep darkness behind the giant carrots and helpful tutorial man, one that will corrupt familiar places into nightmares of flesh and bone, and reduce your plucky friends to bloody piles of viscera. The juxtaposition of cute and horrific does plenty of work here, giving a decidedly sinister edge to the otherwise cheerful world.

Mechanically, Jimmy follows in the well-trod footsteps of classics with a few small additions. Combat is menu-based, with options to fight or use items or employ special abilities specific to that character, like Buck bullying foes or Mom cheering everyone up to restore HP. Jimmy is unique in that he can learn to mimic dream creatures and transform between them at will, giving him the powers of a goon or a bear or a flower of a glob of slime both in battle and on the map. Each form can level up, which unlocks skills that can be permanently equipped and accessed while in other forms. This is on top of the extensive equipment system that includes manuals that teach additional skills, mind you.

All that complexity carries over into battles, where enemies have all sorts of quirks and gimmicks to grapple with. Some enemies can be disarmed by stealing from them as the goon, for example, while others have tells on one turn that warn of powerful abilities coming on the next turn. These factors are crucial for escaping battles in one piece, as even simple encounters can go very, very wrong. It’s refreshing to see enemies that aren’t all cut from the same mold, of course, and your varied tactics in dispatching them provides some much-needed variety.

Sadly it is much-needed, because the overarching design doesn’t quite mesh with the battle design. Jimmy and the Pulsating Mass suffers from one of the classic pitfalls of RPGs, the inconsistent difficulty curve. You can cruise through most of the game, doing minimal exploring and following the plot, until you get stopped dead in your tracks by a boss completely beyond you. You might think you’re missing a gimmick or an obvious clue but you’re not, it’s just that hard. In situations like this leveling is necessary to proceed, which introduces an unpleasant grind that really shouldn’t exist in modern RPGs. Even after my extensive, completionist searching I ended up stonewalled by a key boss because I was several levels below where I needed to be.

This would be bearable if the story compelled you on towards revelations, but that’s the last thing that’s going to happen here. The real problem with Jimmy is that there’s really nothing to latch onto in terms of story connections. For at least your first ten hours or so you won’t know what you’re up against, what force threatens your world, what risk that poses to your family, or what to do about it. You’re just following orders from other characters and wandering. The characters are all more caricatures than nuanced presences which prevents getting invested in their stories. Jimmy himself is a classic mute protagonist, which would be fine if his dreamworld was more of a character and presented interesting representations of his psyche. But no, it’s just a weird, alien world and Jimmy plods along like a non-entity in his own damn story.

For the longest time, I wanted to recommend Jimmy and the Pulsating Mass. I loved the concept, the look, and the depth of systems. But playing it revealed an entire new side of the issue, namely the loose plot and the frustrating roadblocks. Setting the game to Easy helped with the latter, but it’s too little too late because of the former. I got to the point where I was actively dreading putting more time into this title, unconvinced that anything of note or concern would ever transpire. If you’ve got the patience for aggressively old-school RPG mechanics and the slowest of slow-burn stories, maybe it’s still for you. Personally I would love to know what the titular mass is and what its purpose is, but if that’s going to take more grinding out levels and listening to Buck be a dick, I think I’ll take my chances elsewhere.