Fear of the unknown is one of the most prevalent human discomforts we grapple with, but even that can manifest in many different ways. Obviously we fear what we don’t know, but we also fear what we don’t understand. Paratopic capitalizes on that specific anxiety, presenting you with circumstances that make very little sense and challenging you to cope with them. It’s a tack that makes the most innocuous of surprises, like your gun disappearing off the seat next to you, carry so much more weight than they normally would. It’s also a tack that leaves you with precious few answers or conclusions, so be prepared if you’re the type that needs resolution in their games. 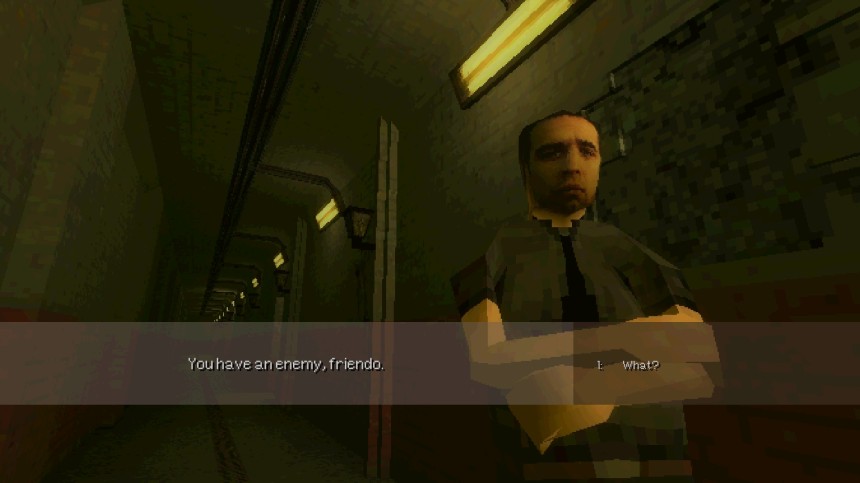 You are part of the seedy underbelly of society, running jobs for shady individuals under the neon glow of a decaying city. VHS tapes are hot in a big way here, imparting some kind of mysterious sustenance to their viewer, and like any hot commodity the black market is booming with tapes. Your current gig is smuggling tapes across the border for some rather pushy types, a job that pays well but also earns you all sorts of unwanted attention. This time, though, the tape drop leads you into an old factory that may not be all it seems, and may house secrets you’d really rather not uncover.

It’s important to note that I don’t know who you are, you won’t know who you are, and one of the pervasive mysteries of Paratopic is figuring out which character you are at any given time. The perspective of the story is shifting constantly, smash-cutting when you least expect it to scenes that may not logically follow. There’s clearly more than one player character for reasons you’ll uncover yourself, but keeping the two straight seems a fool’s errand. While this makes it immensely difficult to follow the narrative, it does a lot to erode the player’s sense of safety when dropped into a new situation.

As I bumbled through Paratopic’s unhinged vignettes, it struck me how similar the storytelling here is to Virginia. While this one does have dialog and some intensely creepy faux-voiceovers to match, the whole style of short scenes stitched together with sudden cuts is nearly identical. Honestly I think it works better here, given the intent to unsettle the player and obfuscate the central story. The scenes are quite varied here as well; you’ll do plenty of first-person wandering and chatting with people, but also a fair bit of city driving, photography, and even a little shooting to round things out. Don’t expect any depth to the mechanics, as each scene is only minutes in length, but it’s a step up from permanent wandering.

You may find, as you work through this fever dream of a story, that very little is happening. The atmosphere is solid, thanks to the evocative retro graphics and excellent sound design, but not much transpires within it. For such a short game Paratopic is a bit of a slow burn, but it’s not without payoff. Right when I was becoming convinced nothing would happen, the atmosphere took a sharp turn for the creepy and… the game did indeed make the most of it. You won’t find many scares here but the ones you do find will be both extremely clever and completely earned. 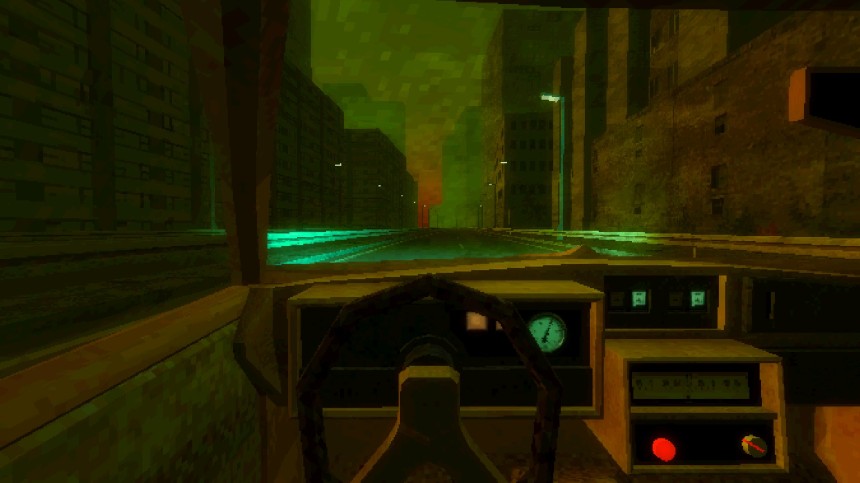 Your adventure will only last about 45 minutes or so, unless you want to count all the time spent scratching your head over the ending. There’s a small gaggle of achievements that indicate some actual choices and secrets to uncover along the way, so you even get a little replay value out of it. Really the only things holding Paratopic back are its length and its aggressively weird story. It’s a good story, mind you, and the experiences that guide you along to the conclusion are expertly-crafted. You’ll just need to calibrate your expectations for this one, and once you do I guarantee one of the more creative and clever horror adventures in recent memory.