Review: A Room Beyond

I tend to avoid episodic games, at least until all the episodes are out, but even then I’m always wary. Episodic development always seems to result in an uneven experience, with chapters of the game feeling like they were pulled from different worlds of design. Sometimes that works in their favor, as with The Dream Machine. And sometimes it doesn’t, as with A Room Beyond. Already built upon a vague premise and indistinct graphics, the episodes that chronicle this adventure feel wildly disparate and uneven. If the revelations they led to were surprising or compelling enough this formula could still work, but sadly there are little moth-eaten holes across this whole tapestry, 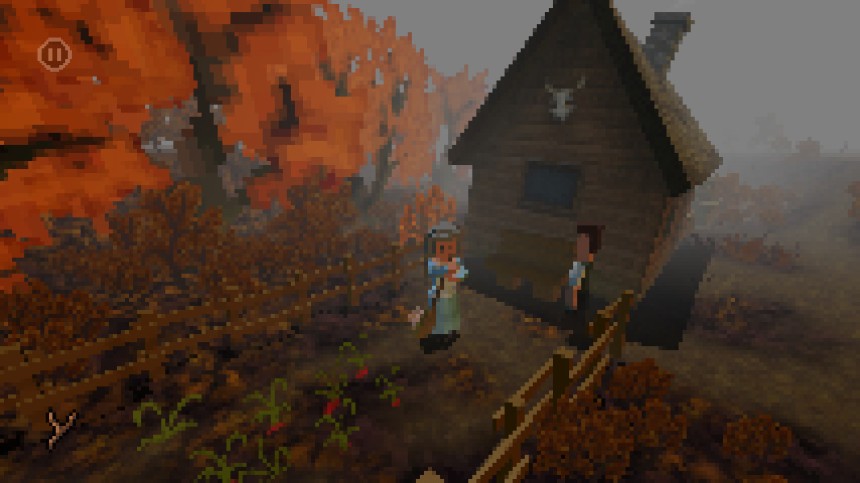 The game opens with you (the player) witnessing a suicidal ritual. It then jumps to you (the character) as you escape from another, possibly related, ritual deep in a dank cave. You find yourself in a hazy valley being terrorized by the Fog Walker, a supernatural murderer who can also recruit glowing bugs to do his bidding. Unclear on what’s happening or your part in any of it, you must struggle to escape death and stop the tragedies from occurring before things get any worse.

I made it through three chapters of the five-chapter game, and that was the best I could piece together. A Room Beyond feels very much like The Last Door when you start it up, with a powerful, stylish opening and clear divisions between its chapters. But while The Last Door had strong narrative and systemic continuity between chapters, A Room Beyond seems to jump all over the place. The first chapter will see you exploring the valley and solving essentially one puzzle, while the second introduces combat and more complex alchemical and pipe puzzles, and then the third has you treasure-hunting and cave diving. Unfortunately the narrative can’t seem to tie this all together either, as the villainous Fog Walker seems to get new powers every chapter, without a hint at it’s motivation over halfway through the game.

It’s a frustrating journey as well, thanks to some mechanics that just don’t work as well as they should. The game is designed to look like a PS1 or early 3D PC adventure, with your blocky character roaming intensely-pixellated terrain. But the art style doesn’t quite click, obscuring many points of interest behind indistinct pixels and forcing you to use the obnoxious highlights multiple times per scene. Your character has trouble navigating the areas as well, mashing his face against walls and bushes in a vain effort to get where he’s going. It’s doubly bad in sequences where you have someone following you, because they’ll block your path and your character won’t attempt to path around them. And the combat just exacerbates everything, requiring you to position yourself and click on enemies until dead, but sometimes they can hit you when you can’t hit them and your attacks have a random chance to connect anyway.

I had high hopes for A Room Beyond, being a fan of pretty much everything that went into it. Lo-fi adventure games facing off against unknown evils are the kind of thing I never get tired of (see how many I’ve reviewed this month), but this one doesn’t bring much more than the themes I like. Simply moving and interacting is a chore, each chapter introduces new mechanics that clutter the game with instant deaths and distractions, and the plot seems barely present. I wish there were something to highlight, but sadly I don’t think there’s really anything beyond the obvious problems here.