Review: The Evil Within

Games have to try new things, lest they stagnate and lose what novelty they have, and that might be vital to horror games above all others. The scares and themes that worked once rarely work again, forcing even experienced designers to keep pushing on to new realms of terror. The Evil Within was an important step in this process, a step away from the action-adventure structure that titles like Resident Evil and Dead Space had settled so comfortably into a few years ago. Actually, it might be more accurate to characterize this as a half-step, because with as much as The Evil Within tries to do differently, it does slip back into familiar modes more than you might like.

An emergency at the Beacon Mental Hospital has summoned Detective Sebastian Castellanos and his Krimson City PD partners to investigate, and what they find is nothing short of a bloodbath. That’s only the tip of the iceberg, though, as the city itself starts falling to pieces and Sebastian ends up in a hellish world of gruesome creatures and deadly traps. Struggling to maintain his sanity in a place that no longer seems sane, he follows a trail of bloody clues to unravel the mystery of this twisted place, and the people responsible for giving it life.

From the onset you’re not going to know much about the horrors unfolding around you, and this is one of the game’s greatest strengths. Compared to something like a modern Resident Evil, The Evil Within feels downright threatening in the early parts, where you’re creeping along with three bullets in your gun and there are half a dozen enemies ready to eviscerate you. Stealth and caution are essential, as are learning to use all of your unfamiliar tools like matches to burn bodies and parts to build specialized crossbow bolts. Your foes are tough enough to take bullets to what brains they have, and their attacks can cut you down in just a few swipes. 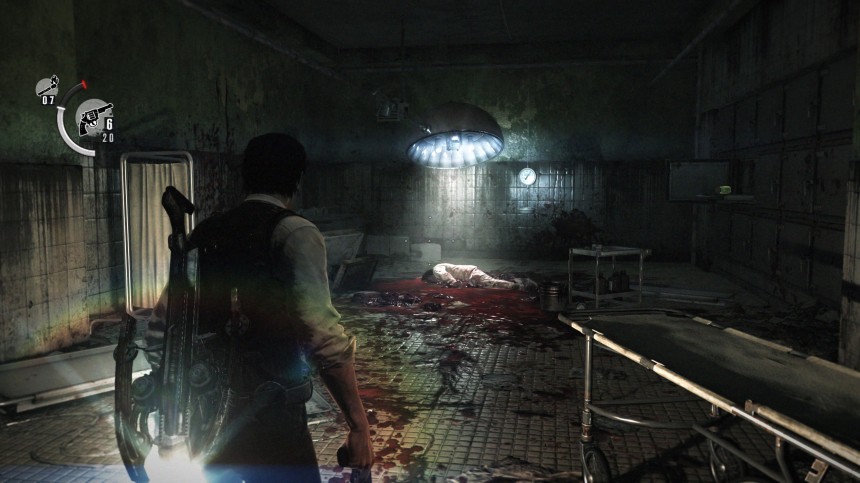 Those early chapters set a specific tone for the game, one where survival is the cornerstone and every wild transition takes you to a new, horrible place to learn the dangers of. During your journey you’ll start collecting a strange green gel which can be used (in a sadistic-looking head clamp device) to upgrade your base stats and weapons. While these upgrades help make you survive more than three hits at a time and run for more than two seconds, they also expand the capacity of your weapons to handle foes effectively. The game seems aware of this, too, and so by chapter 5 or so the open, stealth-based maps start to give way to narrow hallways and arenas of alert monsters to gun down. You’ll also meet back up with your partners, who are all ready and willing to blaze away at monsters in your stead.

Despite some moody interludes in laboratories and a haunted manor, this is the trajectory of the game, from tense stealth survival to bloody rampages. That’s no exaggeration either, by the final chapters you’ll have access to mounted guns and other military hardware to mulch the creatures you used to breathlessly stealth around. There’s a lot of ways to look at this shift, and personally I find it to be a clever echo of the themes that emerge in the story, but what’s important here is that the game you dig into in the first hour or two isn’t going to be the game you’re playing ten hours later. If there’s a part of The Evil Within you really like, prepare to leave that behind as the game continuously reinvents itself. 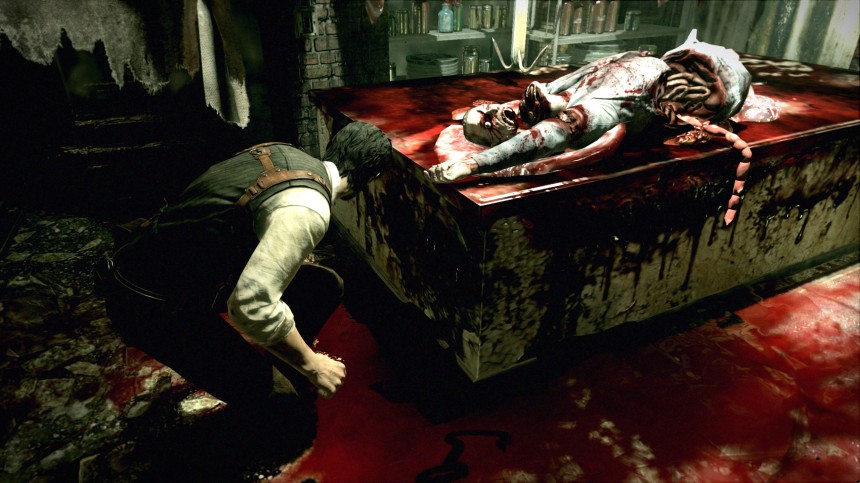 Again, it does tie into the story which is solid, if a bit over-complicated for the scope of the game. Sebastian and his stoic partners are left grumbling and shouting at each other as the twisting narrative is revealed to them, notable only for their dogged determination to get through this hell. It’s plenty dark as a tale, and the gruesome graphics and rich, moist sound effects do wonders to support the atmosphere. The Evil Within succeeds in feeling grimier and more threatening than its peers, a feat achieved by having you traipse across rusted metal floors covered in decaying organs while a spindly, spider-like woman chases after you with jerking lunges. It’s also never going to let up with the threats, no matter how many foes you gun down, because it has an almost perverse fascination with instant-death traps and attacks.

If you’ve made it through this many warnings and still want to experience the gore and grotesqueries for yourself, you should have a grand time with The Evil Within. It does a lot to be different, both in how it plays and how it’s structured, and if you’re prepared for that then it won’t disappoint in action or scares. It’s a genuinely creepy game in many places, and a solid shooter in the others. The deaths can get to be a bit much, and facing some enemies with little ammo can be painful, but the powerful vision of horror on display here deserves your attention. Meet this one halfway, and you’ll find yourself on one hell of a ride.