Dead Secret was a pleasant surprise, a solid murder mystery that managed to ramp up the creeps despite a touchy interface and simple graphics. It was the kind of one-off game you wouldn’t really expect to get a sequel, much less one that improves the formula as much as this one does. Indeed, Dead Secret Circle takes the most interesting parts of the first game’s plot and builds a new mystery around them, as well as refining the systems that allow you to unravel the tale. If not for some bugs and a weaker ending this would be an ideal follow-up, but even those small points leave it a big improvement over the original.

Patricia Gable’s part in revealing the truth behind Harris Bullard’s death got her the ticket out of small-time reporting she wanted, landing her in Chicago at a major newspaper. But her adventure at that remote homestead changed her in some very dramatic ways, and we catch up to her in 1971 during a leave of absence from her gainful employment. She’s having trouble sleeping, haunted by visions of the Laughing Man, the current serial killer du jour in town. Realizing her dreams may have a tangible connection to the case, she begins investigating a condemned apartment building at the center of the grisly murders and quickly finds herself caught up in a new conspiracy tied to her old terrors.

Dead Secret Circle is very much a continuation of Dead Secret, so much so that the first scene will spoil the murderer’s reveal from the original just a matter of minutes in. If you want the full experience, by all means put this one aside until you finish Dead Secret because I can assure you it will be worth it. This sequel gets a lot of mileage out of Patricia’s traumas and the peculiarities of the original case, and you’ll get plenty of big, revelatory moments if you’re equally familiar. It’ll also help you appreciate the growth in design shown here, because the comparison between how the two play is stark. 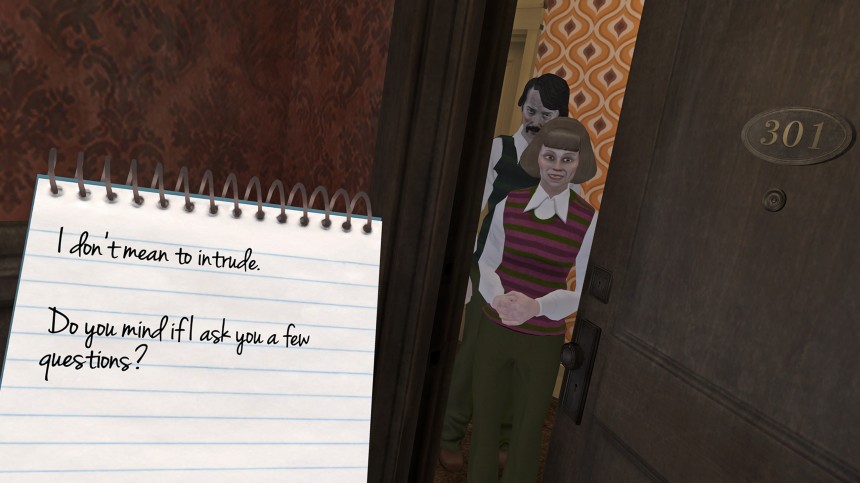 Dead Secret was a first-person point-and-click adventure on rails, heavy on puzzles and reading but less so on exploration. The biggest step Dead Secret Circle takes away from that is making the game freely first-person, allowing you to explore the apartment building at your leisure. The other big innovation is the presence of NPCs to interview and negotiate with, something the the first game didn’t need but feels like a welcome addition here. Those folks foolish enough to inhabit a condemned building with a serial killer are colorful indeed, with larger-than-life personalities and plenty of secrets to uncover. The conspiracies run deep, and you’ll be unearthing loads of details that aren’t even needed to nail the killer.

Speaking with the cast takes up a significant portion of the game, enough that I think the puzzling may have suffered as a result. You’ll still have plenty of brain-teasers to get past, but they’ve definitely been de-emphasized compared to the first. Instead there are loads of absolutely charming collectibles to find, most parodies of 70s-era pulp novels and magazines. These provide extra incentive to explore and make the game world feel more lived-in. It’s not a perfect facade though, mainly because of some major graphical issues that pop up from time to time. It’s not uncommon for ceilings to vanish and reveal the shapes beyond, or interaction points to get impossibly finicky. At least one scripted sequence broke for me and had to be reloaded, and the sound would cut out every once in awhile.

Stability’s really the only big gripe against the game, except maybe words about the ending being a little too jarring and concise. I thoroughly enjoyed my investigations here from start to finish, wandering the decidedly 70s halls and piecing together clues. Don’t misunderstand, it’s not a serious detective title like The Painscreek Killings or something, but it’s absolutely a fun journey to work through. With improved graphics and voice acting, wonderfully creepy NPCs, and a solid story to tie it all together, Dead Secret Circle is a great choice for a thriller with plenty of lore and scares to bounce between.