There is but one pressing question when it comes to horror, and that is: How do you express your horror to another person? We all know what little fears can grip our hearts, but how can we make others experience that fear? In horror games those answers are vast and varied, and those who have mastered the art of creating tension and dread stand far apart from those who yet struggle with the question. Darkwood seemingly came out of nowhere with a vision of horror that both ran counter to expectations and also thoroughly dashed them with how effective it was. Coupled with a wealth of gameplay discoveries to make and surprises around every turn, this has proven to be a new high water mark for the genre.

It’s hard to give a synopsis of the story because the vague details do so much to heighten the atmosphere. The world has seemingly ended in rather spectacular fashion, with a giant, misty forest overgrowing the roads and buildings once so familiar. This is no ordinary forest, though, as it seems to hide both a hunger and a loathing for humanity. Once you begin finding the corpses of your kin and discovering what lurks between the branches of this dark place, you’ll begin to understand. But all you want to do is escape, and that’s going to make for a harrowing journey through the few livable spaces left in the world.

I won’t spoil Darkwood’s brilliant opening, but it does an incredible job of setting the tone and expectations for the game. Played entirely from a top-down perspective, your vision is obscured by walls and darkness which leaves a deep gray “fog of war” over everything you can’t presently see. Obviously this means there could easily be something lurking right around the corner or outside your window, but it also means oddities like corpses and poisonous mushrooms won’t show up until you’re right on top of them, either. This persistent uncertainty is a cornerstone of the Darkwood experience, a brilliant way to both challenge the player mechanically to be observant of their surroundings and also present untold opportunities to build tension and startle. 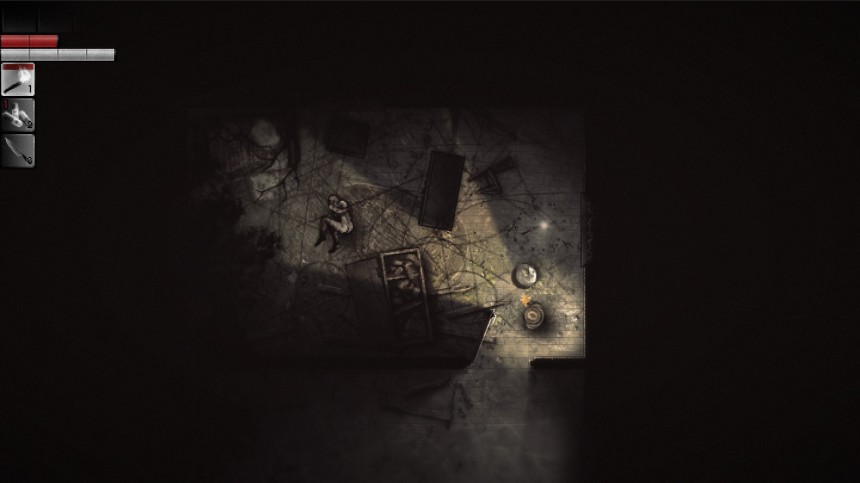 There’s more to the atmosphere than just the vision trick, too. The 2D graphics are at once wonderfully detailed and hideously gritty, portraying a world where nature has twisted into a veritable beast that uses fruition and decay to kill. Structures have been torn into, leaving chunks of walls and furniture to be buried and overgrown with roots. Sun-touched fields hide rotting bodies in their tall grasses, swarming with fat flies. And the creatures that occupy these places are themselves overgrown and twisted, feeling less like living things and more like deadly constructs when you are forced to cave in their skulls with a shovel. I’m only touching on the incidental encounters you’ll have, because the big setpiece locations hold truly breathtaking horrors that deserve to be experienced blind.

All of these factors combine to make Darkwood a grim, unsettling journey even when the sun is high and the land is familiar. It won’t stay that way forever, though, because night is its own frightful challenge. You won’t know the rules of this world going in, and at night not knowing the rules can end with you very much dead. It’s one of the game’s most effective parts, the nightly rituals you develop to deal with the litany of things that emerge from the shadows to end you. You’ll also need to adapt as you move from region to region, as your goal in each place is simply to find passage to the next. When you start the game you’ll have a nice, mostly secure house to base yourself out of, but once you have to move on you’ll need to cobble together what shelter you can out of the ruins you find.

For this reason the game has a fairly robust crafting system, built around salvaging and bartering for parts. While out and about in hellworld you’ll find wood, nails, wires, and other mundane bits to craft basic weapons, supplies, and traps from. Some crafting can be done on the fly but most is done at a workbench, which can also be upgraded with the right items to allow you to make more advanced gear. Starting out you’ll be making nail bats and bandages, but eventually you can start bashing together whole firearms to defend your fragile existence with. You won’t always be able to find everything you need but there are a few mysterious characters you can barter with for key goods, though that’s yet another system you’ll need to learn the rules for.

Even after coming to grips with these systems and excelling in them, reaching the conclusion of Darkwood won’t be easy. I myself am still early on in the very, very lengthy journey and find myself set back every time a new creature appears to contend with. I’ve also had trouble finding ways to progress more than once, as some of the key locations are only accessible through specific events. I had to do one thing that ran entirely counter to my survival instincts to reach one very cool area, so be prepared to look up the next step if you find yourself stumped for too long. Wasting time can be deadly in this game, since your resources are finite and your weapons and fuel won’t last forever. 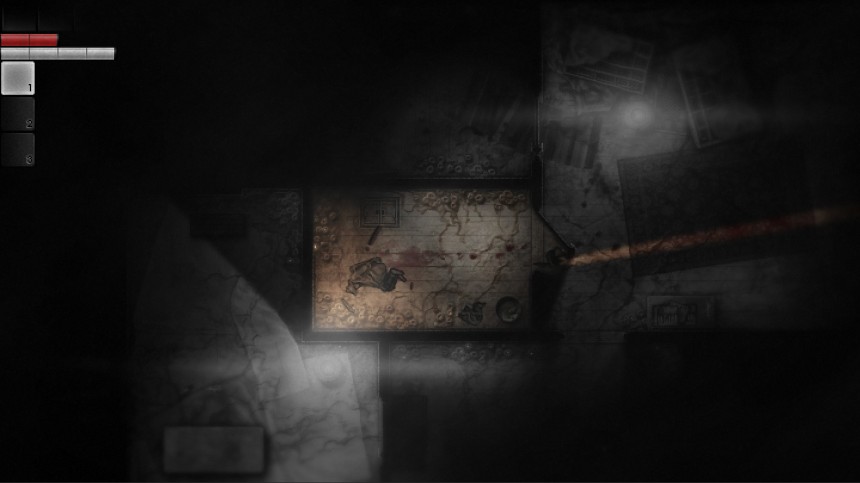 Any confusion you run into is well worth it just to see such a brilliant vision of horror brought to life. Even now I’m in awe of how viscerally frightening a 2D top-down game can be, because I’ve had scares worse than some first-person games I’ve played. The folks behind Darkwood get it, they get how to create hostile worlds and terrifying creatures and how to keep them fresh for hours on end. This is the very essence of survival horror, struggling to persist long enough to escape a land that itself hates you and wants to destroy you. It’s rare to find a game this effective at scaring and also this fun about experiencing it, which makes it an easy recommendation for even the most jaded fans of horror.