There are a number of philosophies to management sims, and while they might look similar on their surface they lead to very different places. Some expect the player to manage only the building element, some add additional progression like research or diplomacy, and others open the experience up to the player’s imagination. The Colonists is not a game with a particularly complex approach, and the result here is something of a game that appears more complex than it actually is. It’s still a charming little builder, perhaps more charming than most, but to get the most out of it you need to be aware of its limitations going in. 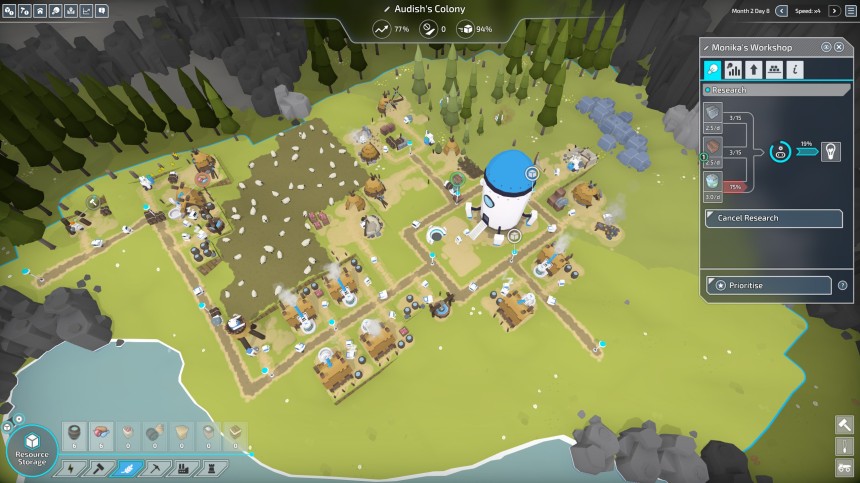 In the not-too-distant future, humans finally make the questionable leap to sentient computers. Instead of SKYNETing us, however, the adorable automatons produced by true A.I. decide to give their creators the finger and jet off to new worlds to claim for themselves. These are the titular colonists, 3D-printed robots intent on building a society far beyond the reaches of their self-styled masters. But creations can only stray so far from their creators, and these little bots end up forming villages surprisingly similar to humans, and occasionally plagued with conflict not unlike their fleshy counterparts.

The short version is that The Colonists is a low-tech city-builder with high-tech inhabitants. Your citizens may look like the theoretical offspring of WALL-E and EVE but they have very familiar needs. Bots require energy to perform their functions and produce it at their residences from food and water (and later booze, hilariously), which leads to fields of sheep and wheat tended by gleaming white robots fresh from the printer. The other concerns of your colonies are equally familiar, with wood and stone forming the basic building blocks and planks, iron, and clay coming into play at higher tech tiers. Research grants you access to more advanced buildings and resources but there are no surprises or important decisions to make, just unlocking what you need to progress.

This is the point I was getting at about The Colonists with regards to limitations. With many builders and management sims you have options in progression, whether it be focusing on a particular tech path or choosing between green and polluting means or favoring diplomacy over warfare. But you don’t have those options here, just a single line of progression to access new buildings and expand your colony. You’re always going to need iron and coal to produce tools, you’re always going to need orchards and presses to make cider, and so on. You might get a choice early on between sheep or fish for food, but every other aspect of your colony will proceed essentially the same way every time.

It’s an important limitation to keep in mind, but it by no means sinks the game. Your concerns in assembling a colony will instead be focused on supply chains and ratios. Goods need to be transported from their sources to where they are used, and that happens almost exclusively along roads and paths. Since labor is cheap in a 3D-printed society, you have a bot manning every 4 to 6 tile section of road you lay. These poor digital souls are responsible for carrying goods along their stretch like a firefighter in one of those old bucket lines. This can get cramped in major thoroughfares so the real meat of the game is learning how to lay out your sprawling empire so the flow of goods never tapers off. 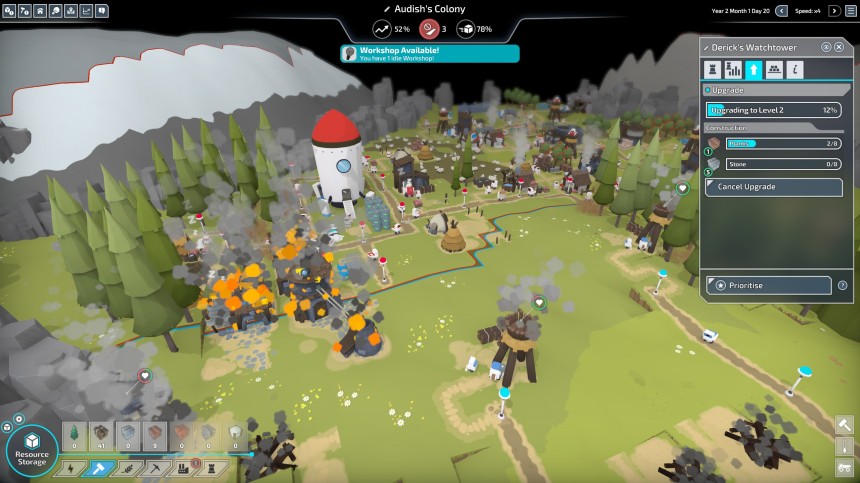 Once you’ve mastered that and the ratios of resources to refinement (which is easy given the wonderfully crunchy UI) you shouldn’t have too much trouble getting through the scenarios. There are ten included, two which are essentially tutorials and then two parallel four-mission campaigns. One is standard building towards a victory macguffin but the other is military focused, based around the game’s concept of territory control. You have to place watchtowers to expand your buildable land, and those can be upgraded with archers and cannons to attack enemy towers. Once a tower falls it can be connected to your road network and rebuilt as your own, allowing you to leapfrog your way to the enemy rocket and victory. It’s a simple system and you need only stay ahead on relevant tech to win, but it does provide a welcome and much-needed change of pace.

Ultimately this is a fairly simple builder, and the simple graphics and sound effects suit the structure. I appreciate the soft curves and flat colors of your boxy residents and their homes, and the gentle soundtrack does plenty to ease you into the groove of the game. There’s a sandbox mode to explore as well once you exhaust the campaign, though keep in mind that each colony you build will follow much the same template. If you’re okay with that, and instead enjoy the logistical challenges of keeping robots stocked in beer and mutton, The Colonists will make for a lovely little constructive diversion.