Some of my earliest gaming memories are of space sims, going back even farther than FreeSpace and X-Wing all the way to Echelon on the C64. There’s something enthralling about piloting a ship around the vastness of space, outmaneuvering foes on all axes and exploring debris fields and derelicts. It’s a smaller genre than it once was, but new names are working to bring it back and Everspace feels like a powerful effort. The free-wheeling combat and breathtaking solar vistas that make space sims so great have been re-purposed here into arenas of danger and discovery, daring you to extract what you can from them without expiring so you can move on to the next. It’s a thrilling adventure, at least once you adjust to its quirks and scope.

You find yourself adrift in space in a shiny new ship, with no memory of how you got there or what you’re supposed to be doing. Your vessel’s AI assistant helpfully gets you up to speed on piloting basics, and then plots a course across the cosmos that will help answer your questions. I won’t spoil the story but there are several motion-comic interludes that explain your circumstances and your interstellar jaunt. It’s one of those clever story hooks that ties into the roguelike structure of the game, and justifies attempting the same journey over and over despite intervening circumstances like death. Along the way you’ll also learn plenty about the history of the sectors, the factions that occupy it, and the many secrets left drifting out in the cosmos.

Before you latch onto images of traversing a rich, sprawling universe at your leisure, let’s clarify exactly what Everspace is. Each leg of your journey takes place in a patch of space filled with asteroids and derelicts and space stations. Everything worth seeing is packed into a twenty or thirty kilometer area, small enough to zip from one side of to the other in less than a minute. You’ll have plenty to do there, between the many resources to collect and mine, hostiles to engage, containers to loot, and traders to deal with. But once you’re done, you’ll warp to another similar area, and then another and another until you reach the warp gate at the end of the sector. 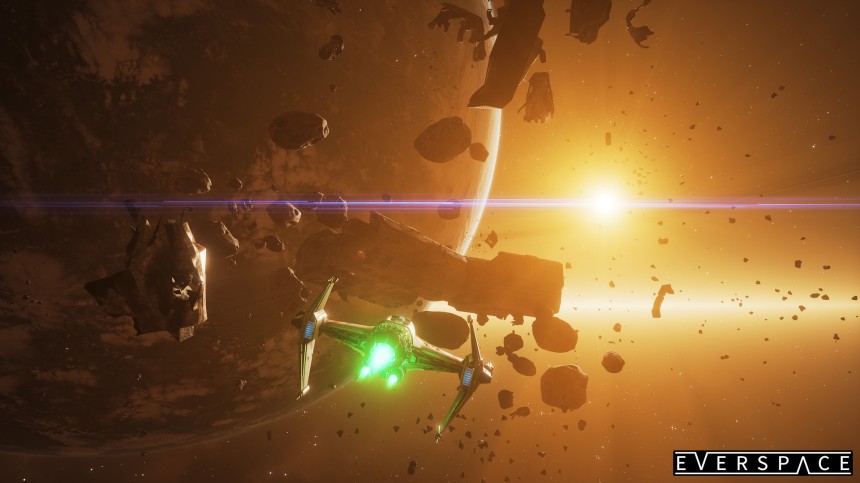 This isn’t meant as a knock against Everspace, but rather an acknowledgement that it doesn’t really capture the vastness of space like some sims do. The focus here is much more on combat and scavenging, and it does both really well. Your ship controls with WASD and mouse, meaning you get a full range of motion including lateral and reverse thrust. This makes dogfights and dodging an intense and varied experience, as you can’t just circle your foes like you do in more traditional flight sims. You’ll need to weave between lasers and juke missiles if you want to survive, and swooping between asteroids and station pylons like you’re in Star Wars is absolutely a valid tactic. You’ll be flying inside ruined ships and cavernous asteroids in search of items too, so precision controls are quite welcome here.

Exploration is just as key as combat, thanks to the wealth of resources and equipment secreted away along each jump. Your sensors are limited in range so you need to get within a few clicks of good stuff for it to appear on radar, but there tend to be big, conspicuous locations like the aforementioned derelicts and porous asteroids to head for. Materials like scrap, gas, and crystal are used to craft weapons, consumables, and upgrades for your ship once you find and unlock the blueprints. You can also outright find items, sometimes upgraded or specialized versions that make them far more valuable than crafted ones. The harder containers are to locate the more likely they are to have really good stuff, with some even requiring keys from elite enemies to unlock.

It won’t take you long to learn what you should be looking for and what kind of weapons you should keep on your ship. What might take you longer is an understanding of what will and won’t kill you, because the game doesn’t have a real good way of expressing threats. On the sector map each stop is color-coded by difficulty, from low-threat to high. That really just tells how many enemies are in the area, not how deadly any particular one is. Some enemies are considered elite, marked with a skull on your HUD, but they mostly seem to have more health and do a little more damage. For the longest time I was getting destroyed by enemy bombers in Sector 4 because of their reliance on missiles and flak guns, while at the same time I had no problem with elites or even capital ships. Flying skill and your ship’s build certainly factor in a lot, but there’s still a need to learn what things are before they start killing you outright.

Meta-progression will also help, and Everspace has one of those that makes you conspicuously better over time. After each run you can use the total funds you picked up on permanent bonuses to both you and your three ships. Most of these bonuses are stat boosts but there are a few that unlock new features, like additional trader options or the ability to find your previous wrecks. Ship upgrades can also massively change how they handle, and there are additional equippable bonuses that can be found in the most remote derelicts and structures. You’ll also earn blueprints during runs, which permanently unlock those crafting options, and new colors for your ships which are a fun little addition. 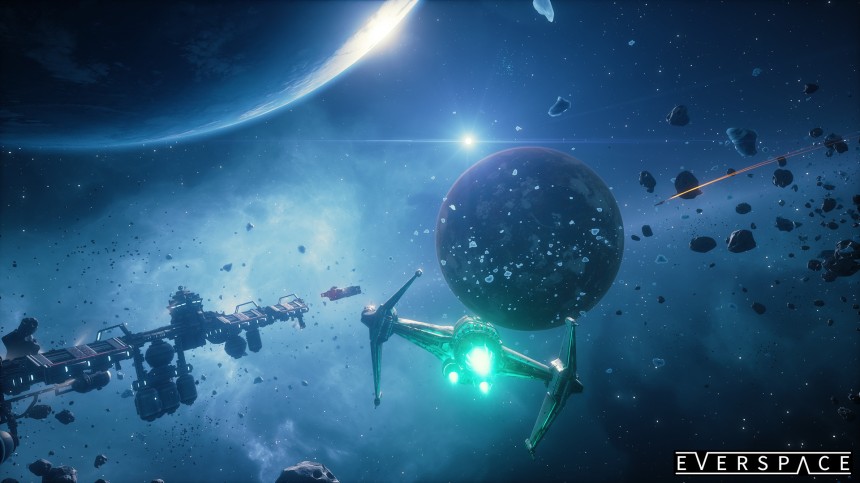 Everspace takes a lot from its roguelike peers, but never forgets the core promise of thrilling combat that space sims are so known for. Even if you’re not a fan of roguelikes or crafting or meta-progression, there’s a good chance the dogfighting can still win you over. Your weapons have to be balanced between shield and hull attacks, and there are plenty of extra tools like drones and mines to give you more options. It all plays out in front of some absolutely breathtaking vistas of planetary rings and nebulae, and I promise you might get killed by how incredible solar storms look because they are just as deadly as they are beautiful. This is a solid offering in the space sim and roguelike genres, even if it can’t match the scope of other sims or the tight designs of other roguelikes. As far as I’m concerned, the pairing is so unique and the gameplay so engrossing that I can easily overlook its limitations.