How often do you think about reloading in shooters? For many it’s an unconscious action, for others it’s an obsessive reflex during lulls in the action. Making it a more active part of the experience may sound like a misstep, but if games like Receiver have taught us anything it’s that mastering crunchy mechanics can be intensely gratifying. SYNTHETIK knows this, and is built around fostering just that kind of mastery. And it’s not just mastery of its expansive weapon systems, either. To succeed here you need to understand the gunplay, the class capabilities, the item pickups, the foes you face, and more. It’s a tall order, but one that delivers a singular experience once you crack into it.

The Kaida Corporation has long been the dominant force in commercial robotics, and today they’re moving to become the dominant force in the world. Their machine legions are marching across the globe on a quest to quell resistance, but the one who has a chance to stop them is closer than they think. You are a Kaida prototype android with a conscience, in the right place at the right time to raid the company’s headquarters and shut down the Heart of Armageddon. They’re not going to take this lying down, of course, so you’ll want to bring a few catastrophically powerful guns, missiles, grenades, and other deadly accouterments to ensure the destruction of anything in your path.

Top-down shooters are the new bedrock of the roguelike genre, but this one has a rather distinct feel from most. You’ve got a slower, more thoughtful pace to your movement here, accompanied with a near-instantaneous dodge for hairy situations. Enemies are similarly reserved, creeping up on you with weapons trained and laying down fire from safe vantage points. It feels much more tactical than the baseline, encouraging you to aim carefully and consider every shot, as well as when best to break out your special ordnance. Having regenerating shields atop your health also has a hand in slowing down the pace, giving you the chance to recover your defenses if a fight goes wrong. 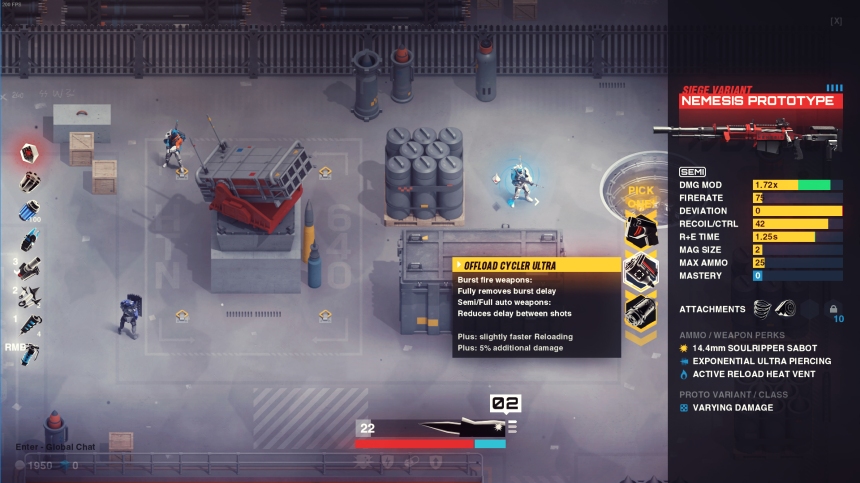 The real heart of the experience is the gunplay though, and you’ll find a far more involved experience here than with just about any other roguelike. For starters, you can’t just mash R to reload your weapons. You have to first hit E to eject your magazine, then hit R to insert a new one, and you can hit it again at the right time while the reload bar is filling to speed up the process. Oh, and there’s the added bit of realism that you throw away any remaining bullets in a magazine when you eject it. These might sound like annoyances but in SYNTHETIK they work as points of immersion to draw you further into the game. The added attention on operating your weapon helps ground the game and make the tasks more identifiable, as well as more gratifying when you nail a process.

There’s more, of course, like having to aim for headshots in a 2D game, clearing weapon jams, and managing heat buildup. But the point should be clear, that you need to prepare to put some effort into using your guns. The reward for that effort is over 80 weapons to play with, everything from compact handguns to anti-aircraft LMGs. Each gun has been lovingly crafted, given a rarity like Diablo, and assigned stats to peruse. Weapons (and yourself) can also be upgraded with new perks and effects, allowing extremely deep weapon customization without the need for a crafting system. Item pickups are just as well thought-of, with powerful but balanced effects like missile barrages and orbital lasers. 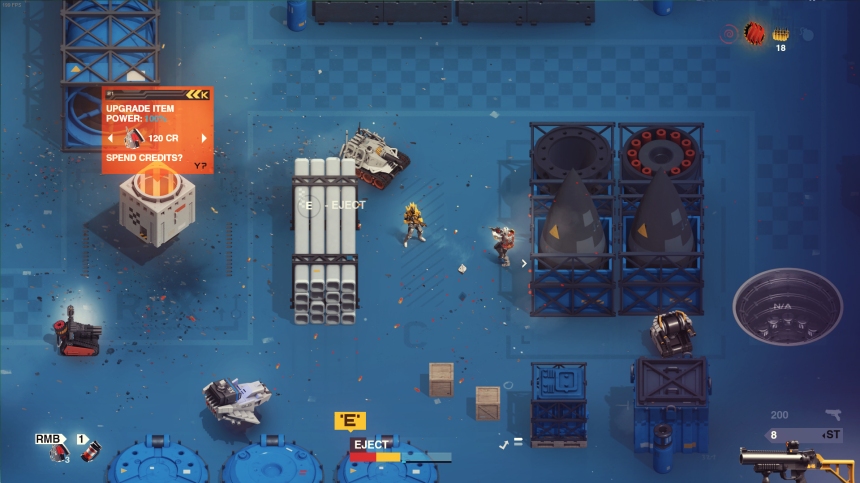 You have all the tools you need for strong, creative attacks on cyborg encampments, and you’d better believe your enemies have something to say about it. Troops can carry much the same rifles, shotguns, and grenades that you do, and they’ve got all kinds of drones and tanks to back them up, too. Battles are messy and chaotic unless you’re the smoothest of operators, but regardless the field will be littered with fragments and oil by the time you’re done. There are eight classes you can take into battle for this, each with their own unique ways to best take out foes. You’ve got snipers with strong single-shots, riot patrols with natural defenses, and even classes that emphasize stealth and melee assassinations. You’ll even score meta-progression in the form of new passive perks for playing a class enough.

Add in highly-customizable difficulty and loads of unlocks, and it’s not hard to see SYNTHETIK as a significant step forward for the genre. It’s not going to convince folks that want their shooting swift and simple, but for everyone else the tactical moves you make here are just so gratifying. I love clearing a jam or slamming in a new mag just in time to dump incendiary rounds into a patrol. I get the feeling you will too, if you give this one a chance. SYNTHETIK has expanded shooter mechanics in some exciting ways, and wrapped those innovations in a deep and rewarding game.