You need only walk into any tabletop gaming store to see just how very many kinds of card games exist. Truly, anything can be abstracted into a card game, and it can be further balanced around single-player, cooperative, and competitive play at all different levels. This is just as true for digital card games, and I say this to highlight the uniqueness of Card Quest. Built as a dungeon crawler with card combat, this one sets itself apart by posing each battle as a sort of puzzle to overcome. There’s very little margin of error with the way this one is tuned, but an incredible amount of variety and very tight mechanics keep this a title to return to again and again.

Whatever blighted land it is you live in has problems, and you’re just the scrappy potential hero to take them on. Three campaigns await you, facing an undead plague in a fallen city, exploring the mountain home of the dwarves, and hunting a mythical creature in an enchanted forest. There are thin branching stories to follow in each of these scenarios but the main focus is going to be on your chosen class, and the beasties they have to power through on their way to victory. Though your attempts may not always succeed, you can find gear and relics that unlock dramatic new powers for your class, as well as eventual sub-classes that entirely transform how your character plays.

How your character plays, of course, is a matter of cards. Each of the four classes, Wizard, Fighter, Hunter, and Rogue, have equipment slots that determine what cards are added to their deck. For example, the Wizard starts out with lightning spells, arcane defenses like magic shields and blinks, and special spells that offer additional card draw. These can be swapped out for fire spells, or mirror spells, or all sorts of other weirdness as you find it. During battles you play cards against your foes under a five-card hand limit, spending stamina and other resources like arcane charges to attack and defend. That would all be pretty standard, if not for how Card Quest is balanced. 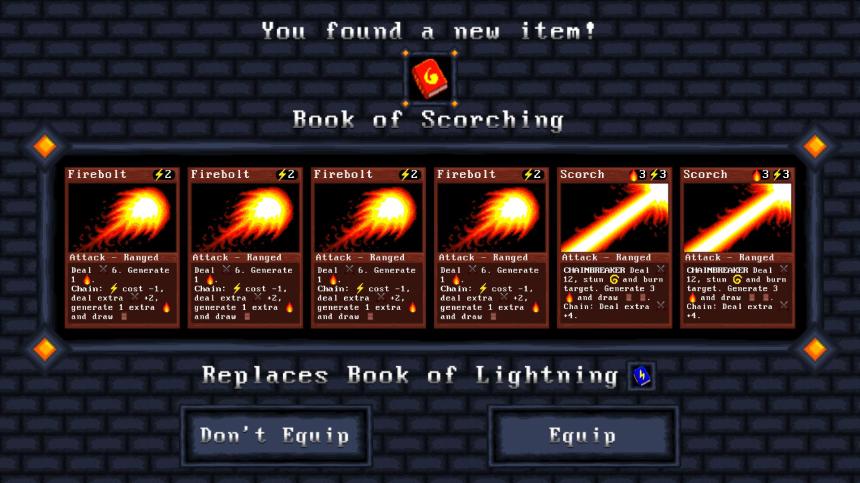 You’ll find quite a few interesting mechanics as you start to learn the ins and outs of combat here. Most cards chain together to produce additional effects, usually positive but occasionally negative, and these can be manipulated using chainbreaker cards. Some cards move you away from enemies, putting you outside of melee range but sometimes giving your foes some new way to attack. Enemies can also use rage to attack multiple times per turn (and you need defensive cards to answer those attacks), dodge to avoid a set number of attacks, and can even show up out of nowhere after you clear whatever foes are already present. Depending on which class you pick you may also not have much health to weather threats, which makes it that much more important to combo your cards effectively.

This is what I’ve been getting at about Card Quest, and what sets it apart from other card-based titles like Slay the Spire. You’re often going to be facing armies of seven or eight foes, each with a sizable chunk of life to get through and a deadly gimmick threatening you. For classes like the Wizard, which have a scant 10 HP, that means you cannot afford to get hit pretty much ever. Wizards have the tools to pull this off, but it requires extensive comboing and great attention to all the damage sources and resources floating around. It turns battles into puzzles where you must clear your foes as quickly and efficiently as possible, but it also means one miscalculation or even a bad draw can end your run right then and there.

Each of the game’s three scenarios plays out across six areas, each containing around seven battles. Once you beat an area you get choices of which one to travel to next, and specific areas are where you find the equipment pieces for making new character decks. Obviously you’ll want to be exploring a lot, and as you do you’ll gradually develop the strategy needed to beat the ever-tougher challenges. Card Quest is not an easy game, and it’s one that demands a lot of thought, but those willing to battle through it will find it very rewarding. There are a lot of clever mechanics to uncover here, and a lot of additional content to unlock, which should do plenty to hold your attention. Just keep some stamina reserved for blocking on enemy turns, and you’ll be fine. Maybe.