As great as the classics of the roguelike genre can be, accessibility has always been an issue. Trying to learn NetHack was an uphill battle for me, with loads of esoteric keyboard commands and ASCII representations to memorize. It’s not an impossible hurdle but I do appreciate games that make the effort to smooth over the transition, allowing the player to focus more on learning the gameplay, not the interface. Cogmind may be among the best classic-style roguelike I’ve played in terms of accessibility, which isn’t to say it’s an easy game to get into. On the contrary, there’s loads to learn about your modular body and sprawling world and granular stats, but the clean, intuitive interface helps keep you focused on progress, which makes it an incredibly satisfying experience overall.

Congratulations, you’re a robot! At least, part of one, like the torso of a Gundam or something. You come online in the depths of a scrap pile, where another plucky little automaton encourages you to try and find your way out of this metallic morass. There’s a lot of factories and warehouses and ruins and worse between you and nebulous freedom, though, and you’re just a CPU in a flying box. Fortunately, you can bolt bits of other robots onto yourself, from wheels and legs to fusion reactors and particle cannons. Armed with the arms of others you’ve got a chance of blasting your way out, or sneaking your way out, or making some unexpected alliances on your way out, and perhaps leaving a mark on the strange, automated world you’ve awoken into.

Cogmind is daunting on a lot of levels, right from the get-go, and the sense of where you are and what you’re doing is definitely a part of that. The tutorial area does a great job of teaching you how to scoot around, scoop up parts, and blast bad bots, but once it turns you loose it’s going to take some time to get a grip on your situation. This is a much larger world than most roguelikes offer, with multiple areas per region and multiple paths through the world and secret areas off of secret areas to explore. The inhabitants and features of these places are going to be equally unfamiliar, despite the game’s default presentation eschewing ASCII for tiny, detailed tiles. You’ll learn to recognize weapon and bot types in time, but starting out you may be hard-pressed to tell the difference between a benign cleaning droid and a rocket-launching sentinel.

But the beauty of Cogmind is that this is a product of depth and complexity, not a failure of the interface. All the information you need to make decisions is a mouse-hover or right-click away. Hovering over anything of note in the world will pop up a little tooltip with its name. Right-clicking things gives you as much detailed information as you character has access to, with full descriptions and stat sheets for friends, foes, firearms, and furniture. It’ll take time to digest what on those sheets represents an existential threat but the information is there, and you can absolutely teach yourself just by being curious about the world. And the basic combat is as simple as clicking on targets with weapons equipped, so even your first few attempts at the game should span a variety of areas.

The hardest part of the game to come to grips with is going to be the equipment system, because it is so unique and has such a profound effect on gameplay. As I said, you start your cyber-life as a featureless, floating core. You have four classes of parts you can attach to that core, which provide power, mobility, utility, or offense. Mobility parts are of particular note, because they determine how quickly your turns sequence. You can use anything from legs to wheels to treads to jets, and the faster you are the more turns you can take before your enemies act. But weight is also a factor, so if you want to make a bot with quadruple howitzers you’re probably going to need tank treads or a dozen legs to get around. Your parts and their operation affect additional stats like heat, but more importantly they provide cover for your core. Parts are the first pieces of you to take damage in combat, and the more you lose the more damage will slip through to your core and threaten your existence. 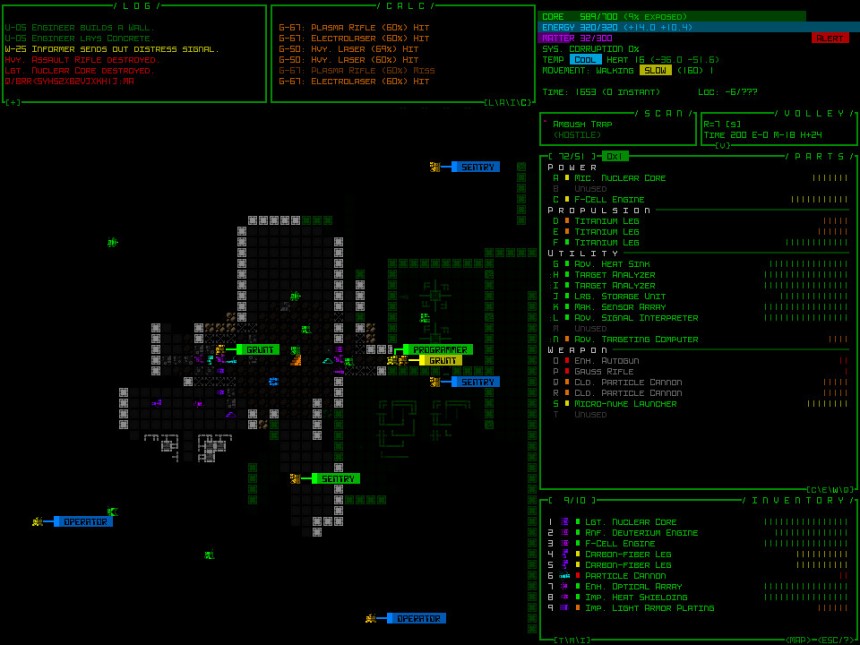 Building your bot for specific purposes is key to success, but unlike other games where you lock into a class or a build, your character will always be fluid in Cogmind. Parts won’t last forever, and unless you’re carting around replacements you’ll need to adjust on the fly as chunks of you get blasted off. Combat isn’t the only way to progress, either. Stealth is extremely viable for skirting around foes, and hacking allows you to make incredible use of terminals and other devices laying around. Even within these archetypes there are dozens of ways to go with the equipment you find, and the literal hundreds of different weapons and utility parts mean you’ll always have something new to try out.

You’ll also always have something new to find, as well. I mentioned the game world being huge but there are places right near the start that you may never see for dozens of hours. Your efforts to escape may seem straight-forward but there’s an incredible amount of story stuffed into the periphery of your quest, that you’ll need to hunt down if you want to be a part of it. Beyond the security bots and cleaning droids you’ll spend most of your time around there are actual factions to meet and negotiate with, factions with agendas and quests and struggles over this mysterious world you find yourself in. The writing for them is spot-on as well, full of clever jokes and unexpected notions that make dialog a pleasure to come across.

It really is just the learning curve that holds this one back, and it’s a product of just how rich and varied the world and systems of Cogmind are. The presentation is absolutely perfect for a cybernetic adventure, with Matrix-style code crawls and green-on-dark readouts. The tiles and ASCII origins are used to fantastic effect for big blasts and explosions, enough to make every weapon feel distinct and powerful. All the sound effects and ambient sounds are equally on point, punctuating big battles and inspiring dread in quieter moments. This is a game that I really want to dig much deeper into, but what I’ve seen is already utterly engrossing. Put in the time to learn how it works and what it expects of you, and I guarantee you’ll be just as drawn into its fascinating world.