If you were lucky (or ancient) enough to be around for the formative classics of the FPS genre, you’ve surely got some very deep, very meaningful memories of them. For me, the original Quake holds a special place in my heart for its grim, otherworldly architecture and monsters. I feel like I’ve waited ages for another game to capture that same feeling, that sense of delving deep into eldritch places and disturbing things that were never meant to see the light of day. I’ve also been waiting for a game that captures the same chaotic, high-speed action, both in the campaign and in multiplayer. And in the end, it turns out I’ve been waiting for DUSK. 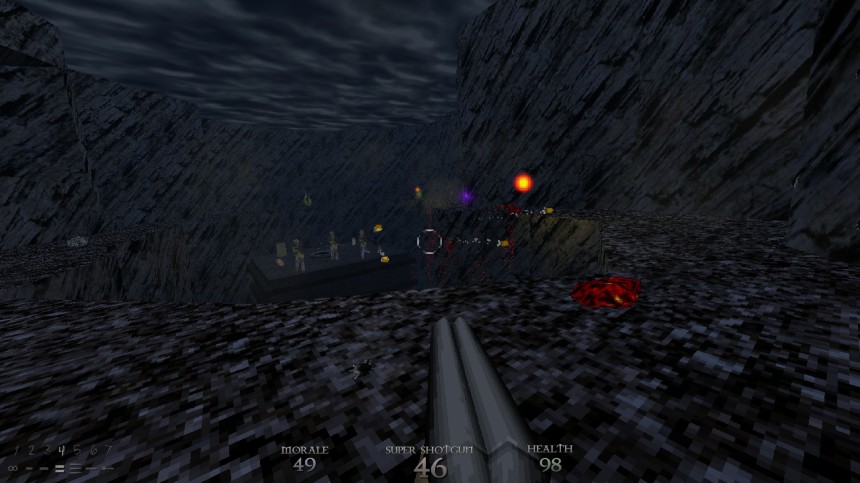 You have run afoul of a particularly nasty cult, one that has impaled you on a meat hook in the basement of some remote farmstead. The dark voice in your head is not about to let it end there, though, and so you unhook yourself, grab a pair of sickles, and go to work on the evil that has waylaid you so. Your journey will take you across the barren countryside, deep into strange and forbidden facilities, and out into realms with no name and no place in the mortal world. In these forsaken lands you’ll have to fight your way past cultists, soldiers, demons, corpses, and stranger beings still, and for that you’ll have a hearty arsenal of shotguns, rifles, explosives, and helpful items to find. Secrets about, enemies approach, and your only mission is to seek and destroy.

In truth I could have written that same paragraph about any number of games. Some of those games might have you cover-shooting your way through your foes, or scooting around discrete arenas for encounters, or taking time out to let your health or shields regenerate. DUSK doesn’t do any of that, really. DUSK gives you a bunch of guns, and points you at a level full of bad guys, and wants you to revel in what happens next. Compared to most modern shooters you move at an absolutely absurd pace, you leap like a gazelle and never take fall damage, and your enemies are all either melee fighters or fire projectiles you can dodge. All the pieces are here for you to strafe, jump, and flank your foes with impunity until they are naught but gibs painting the floors, and that’s exactly what you’ll do here from start to finish. 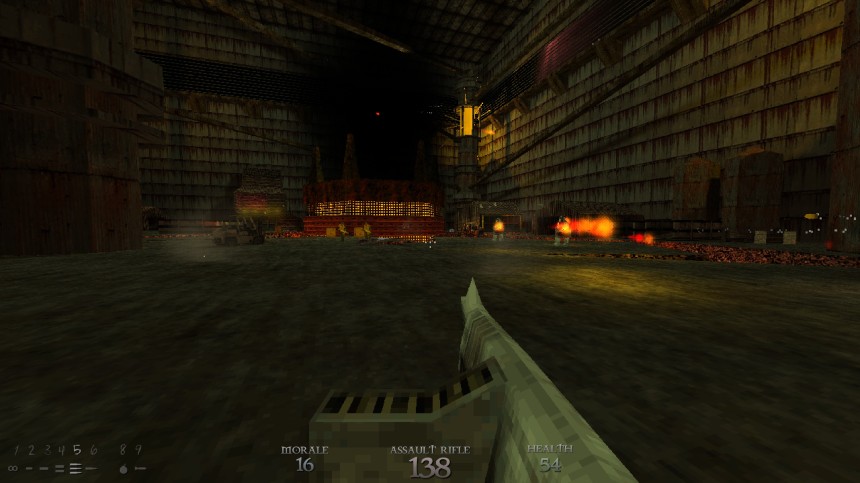 Countless FPSes have claimed to bring back the classic high-speed action of 90s shooters, but DUSK stands proudly atop that prodigious pile. Every part of the design, from the weapons to the enemies to the physics to the balance to even the end-stage stat screen, is inspired by genre giants like Doom and Quake. And there can be no question that classic action lives on here, as you power down a flight of stairs point-blank blasting cultists with a double-barreled shotgun, or lob mortars into a room full of ravenous creatures, or rain hell down on a sprawling map of ruins and jump pads. You can haul ass through levels, splattering foes along the main route in pursuit of the developer times, or you can poke at each nook and cranny for the dozens of secrets sprinkled liberally across the game. You can snipe monsters with your crossbow or hunting rifle, or carve them up with your sickles and sword. DUSK remembers what was fun about the classics of the genres, and not only revives the best parts but breathes new life into them.

As much as I can gush about the action and arsenal, it’s the levels that make DUSK such an incredible accomplishment. Your blood-soaked journey is split into three episodes of ten levels each (plus one hidden level per episode, of course), and there are distinct themes running through each. The first episode sees you raiding farmsteads and hiking through forests, plunging into abandoned mines and winding your way through derelict mills. Maps here tend to be open in exterior areas and tight in interiors, and each one is a long battle to the eventual exit. That changes in the second episode, where each level takes a very different structure. You might find yourself in a massive, open arena in one map, a twisting, interconnected facility in the next, and impossibly deep tunnels and chasms after that. The final episode takes this variety to new heights, crafting nightmare fortresses and cityscapes for you to battle through before throwing all the rules out the window and challenging you to some of the most unique levels in any shooter. If you’ve ever thought to yourself “Boy, X sure would have made a neat Quake map,” that map ended up in DUSK somewhere. 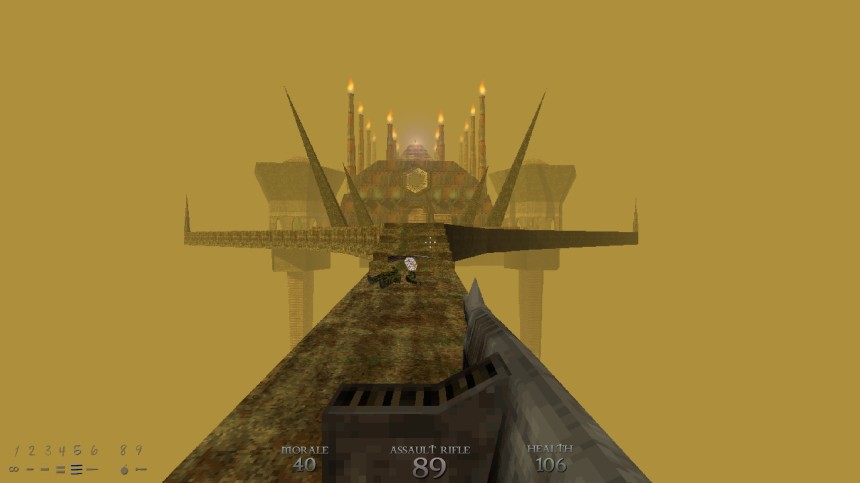 All throughout this mad odyssey you’ll be treated to incredible vistas and visions of vibrant hell. There are cathedrals humming with dark energies, floating temples drifting above the clouds, impossibly towering factories, portals to other dimensions, and ruined landscapes of fire and fog. Some of them can be confusing to navigate because of their scope, but it’s understandable considering how complex they can be. The story running through all of this is told mainly by the environments themselves, with thematic connections between levels and infernal machines producing effects that carry on into later locales. One particular level is paced like an honest-to-God horror game, with warnings of a dark presence, a dramatic reveal, and consequences that follow you for the rest of the game. The storytelling reaches an impressive crescendo near the end of the game, where loads of little hints in the early levels come full circle and you begin to understand the gravity of everything you’ve seen and done.

DUSK is the one throwback FPS that really, really gets what’s great about the genre. There’s only so many ways I can say it, it’s the game that gets the formula right. The low-res textures and models perfectly capture that gritty 90s look, the sound effects are meaty and booming, and the soundtrack is an incredibly moody mix of metal and ambiance. There are tons of secrets to find, from hidden rooms to clever references to brilliant extra mechanics like the soap hidden in each level. You can replay completed levels to check off special challenges, there are five difficulties to attempt, there’s an endless mode for wasting infinite foes, and the multiplayer is every bit the lightning-fast chaos that Quakeworld was. If you love FPSes, regardless of whether you’re a veteran of the classics or a newcomer to the genre, you have to get this. Don’t question it, just lose yourself in this perfect symphony of blood and mayhem.