You would think homages would be easy to pull off, since you have source material to very conspicuously work off of. But of course that isn’t the case at all, because there are so many ways to interpret the lessons of your predecessors, and many of them wrong. Freedom Planet was a game that mostly understood the right lessons from the original Sonic games, and formed something arguably greater from those pieces. Spark the Electric Jester certainly seeks to do the same, and for most of the game you might feel they’ve succeeded. But while there are definite bright spots in this title, there are some serious missteps you should be aware of before running off with this one. 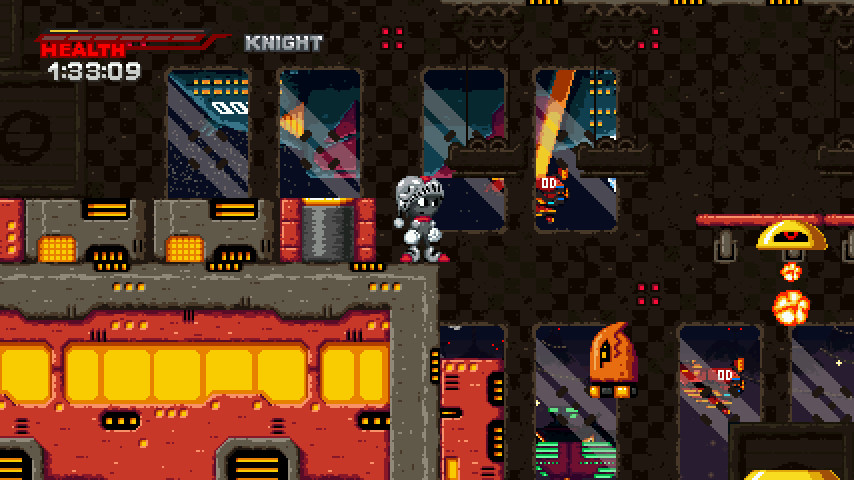 Spark is… I don’t know what Spark is, but he was an electrical engineer before the march of capitalism rendered him obsolete with robots. Using his wonderfully-conductive gloves, he tried moving into the entertainment biz as a jester but had even that paycheck stolen from him by a ‘bot. Frustrated and seeking revenge, he was almost delighted to discover a robot uprising in progress that he could fight by putting his gloves to more destructive uses. Thus begins an odyssey that spans cities, forests, deserts, towers, spaceships, and more as Spark crushes the rebel automatons and learns more about their mysterious instigators.

Before you decide that all sounds pretty good, let me clarify that that is about as specific as I can possibly get about the plot, even if I didn’t care about spoilers. Storytelling is one of the big weaknesses here, and it manifests in a couple ways. You’ll notice it right off the bat, when you start a new game and the first couple of minutes are a text-dump against a black background. The story will pop back in every few bosses, and then take off in all kinds of weird directions in the final stages with a scientist and robot allies and a space fleet and a doomsday tower that virtually appear out of nowhere. This narrative trainwreck doesn’t really harm the gameplay but it does make it harder to invest in a journey of several hours when the going gets rough. 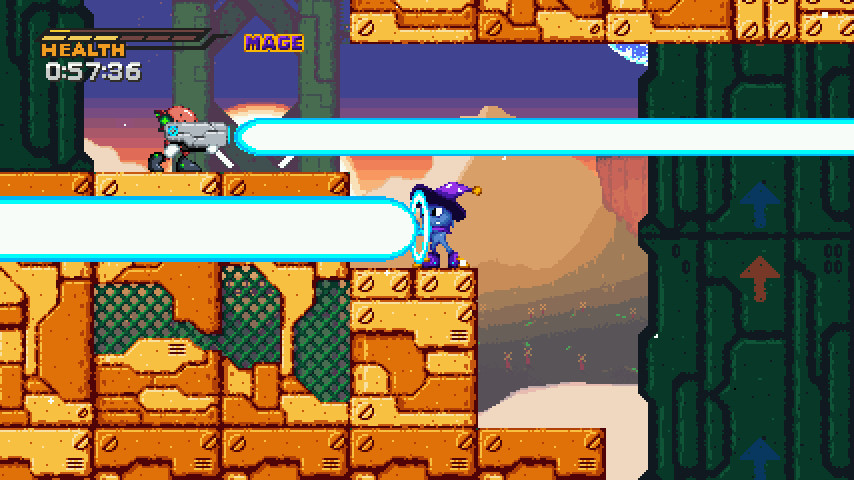 For the most part though, the going won’t be that rough. I did mention that Spark seems to take the right lessons from the Sonic games, and most of those are in the controls and level designs. Each area is an absolutely massive spread of platforms and tracks, giving you ample space to reach mach speeds and blaze through or do some careful jumping in search of secrets. The controls will be equally familiar to Sonic fans, mostly tight but with some momentum-based considerations especially when jumping from inclines. You’ve got a floaty jump, walljumps, and an on-demand dash to help you navigate, and chargeable attacks for dispatching foes. Oh, and don’t worry about exploding into showers of rings or batteries or anything, because Spark has a generous life bar and restorative items dot the levels like lint on a static-charged dress.

There’s quite a bit more to the controls than that, thanks to the game’s costume system. Spark can find glass cases that contain scarves or goggles or hammers that give him new sets of powers, and some of these are dramatic in their scope. Aside from familiar entries like Sword and Fire, you’ve got stuff like Wind that gives you two extra midair jumps and the ability to spin up like Sonic, Board that lets you surf across levels and jump entire screens, and Gravity that allows for indefinite flight. Typically the more mobile a costume is the less damage it does, but you can carry two costumes to swap between and some of them like Staff and Hammer are hilariously powerful. There’s even an Archer costume that lets you fire off arrows that trivialize most of the bosses, which seemed to be designed with melee range in mind. 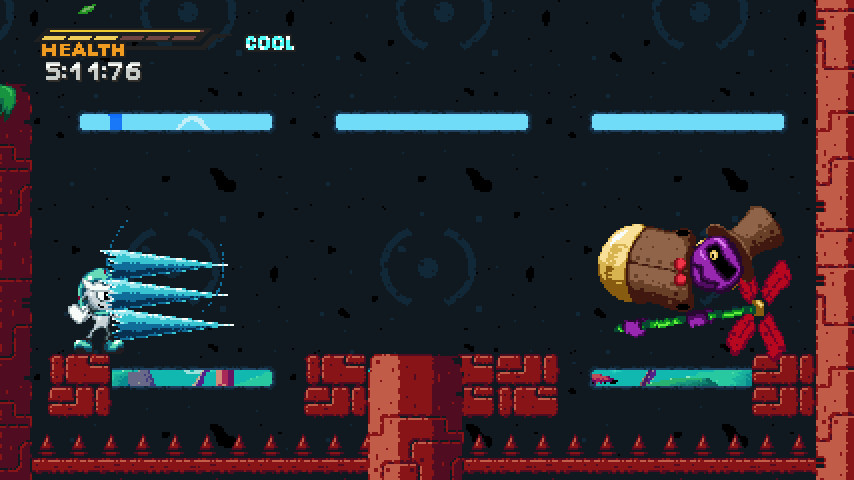 Obviously balance isn’t a huge thing in this game, and honestly that’s fine by me. Most of Spark’s journey is pretty easy, which gives you the freedom to try the less broken costumes or just break the hell out of the game with the wild ones. By the final chapters, though, you’ll probably need to start leaning on your OP options. Bosses start getting pretty tricky and loading up on too much health, and the levels get even longer and add some infuriating gimmicks. The second-to-last level had me fuming because of tiny platforms and exploding warheads that could easily hit you from almost anywhere. I was also pretty unhappy with the final boss, both because it rips off Sonic in a way that goes shrieking past homage and has some intensely frustrating patterns. Up to these points the game is smooth sailing and a ton of fun, but be ready for that to come to a screeching halt before you can see this one done.

If you are enticed to give Spark a try, you’ll have plenty of it to enjoy. The main adventure should take around four to five hours to get through, and beating it unlocks a second story mode that could be just as long. There are other modes to unlock besides that, so you could be sparking it up for quite some time. The graphics are nicely pixel-arty for what they are, with a few stand-out animated cutscenes that I wish there were more of. The music whips though, as just about every single stage gets an intensely catchy and memorable track. I should also mention that it can be a bit unstable in some annoying ways… the pause screen is where all the instructions for your costumes is hiding, but my game tended to crash every time I paused so I had to suss things out myself. In the end it comes down to what you need in a platformer, high-speed action and crazy powers or balance and narrative flow. If you’re all-in on that first bit with none of the second, you should be pretty pleased with our buddy Spark here.