Review: Momodora: Reverie Under The Moonlight

I try not to compare games to Dark Souls, I really do. It’s the game journalism equivalent of putting ketchup on everything, or playing the Electric Slide at a wedding reception. But I’m mentioning it here because it’s less about the difficulty or the combat, but rather the atmosphere and narrative as presented. Momodora really nails that sense of ominous mystery, that feeling of being in a hostile place where anyone and anything could turn on you in an instant. It backs it up with a steep difficulty curve and methodical combat, of course, and tops it with a helping of metroidvania design, which results in a very sweet and regrettably short romp through an accursed land. 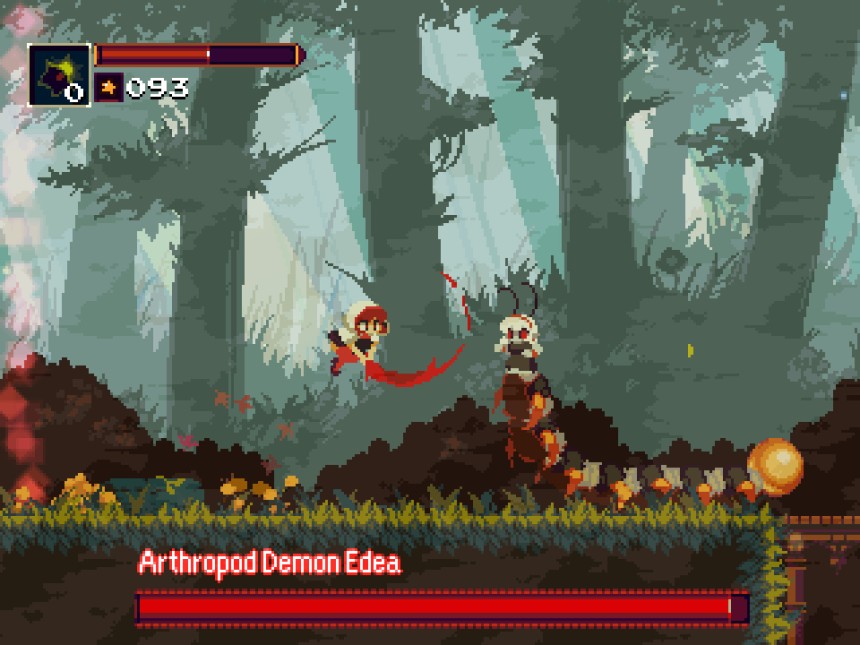 The remote village of Lun has been struck by a terrible curse, and their only hope is a young priestess. She has come to the capital, Kurst, to seek an audience with the queen and procure the aid she needs to lift the curse. But what she finds is a city gripped by death and madness, the very source of the blight she intends to stop. Armed with only her faith and a magic leaf, the priestess must descend into the water-logged depths and ascend the highest towers to uncover the truth about the curse and strike at its origin. She’ll meet more than a few odd characters along the way, as well as a whole host of terrors intent on stopping here.

So yeah, a shining city gripped by a terrible darkness of unknown origin, populated by eccentric characters that give you cryptic clues. It’s Dark Souls storytelling to a T, and it works incredibly well here. Your journey begins in sun-touched glades battling wild fairies, but soon plunges you into gothic streets of eternal night, flooded tunnels beneath the city, and withering gardens choked with evil. The explanations for all these happenings are piecemeal at best, and you’ll face some bizarre bosses that never really get explicit explanations. All this plays into the atmosphere of dread and mystery, which helps make Momodora all the more compelling to fight your way through. 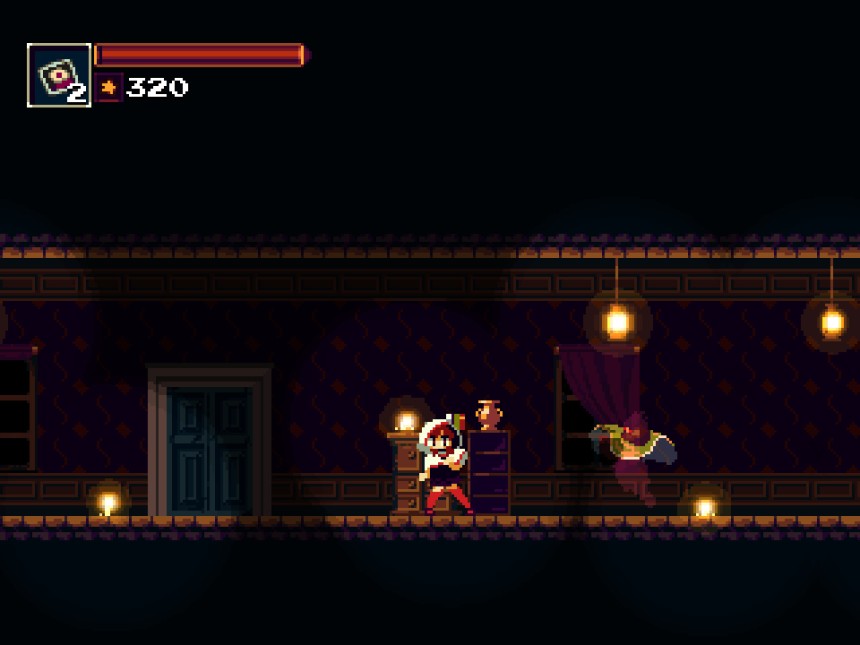 Fighting is what you’ll be doing most of the time, and I’ll tell you up front that while I found it quite good, it’s also bound to be stiffer than you’re expecting. Your priestess wields a magical leaf which can rend foes with a simple swing, but those swings lock her in for the entire animation. You have a three-hit combo while standing that does dramatically more damage on the last hit, so learning to time out your combo is going to be important. The aerial attack similarly locks you in, forcing some serious commitment to your attacks. There are no upward or downward strikes but you do get a bow to plink away with indefinitely, as well as some upgrades to its attacks as you progress.

Getting used to the somewhat stilted controls takes some time, but they’ll eventually serve you well against the many creative foes and bosses in your way. Both can be staggered by your heavy attacks, and most common enemies can be stunlocked to death if you’re fighting them one-on-one. Bosses tend to have very simple patterns so most of the challenge is in finding openings for your own blows. Well, that and not getting hit, because everything in this game does an absurd amount of damage, like two hits and you die starting out. The difficulty curve is steep at the beginning, but a combination of mastering the controls and finding upgrades will smooth it back out and have you playing cautiously but confidently for the rest of the game. 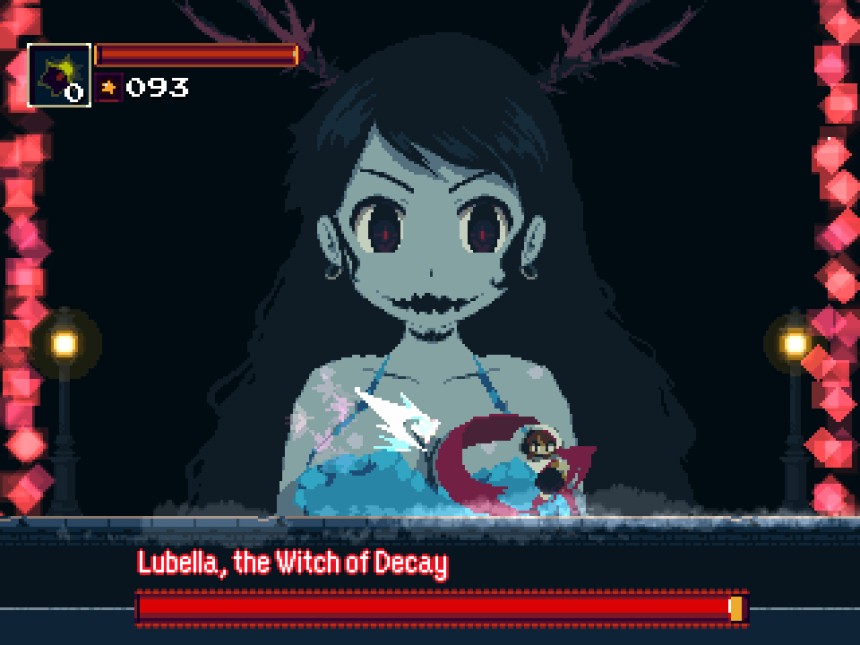 As far as progression goes, this is a metroidvania through and through. Hunting bosses earns you more mobility powers and parts of the key object needed to access the final areas, and eventually a warp between save points. There are items to find as well, powerful passives but also consumables that recharge every time you hit a save point, which resolves that age-old agony of hoarding items through the end of the entire game. You’ll find a fair number of keys but also some pretty neat upgrades, stuff that will keep you looking forward to the next reward. Secrets abound as well, and the game even adopts that old metroidvania chestnut of having special one-off interactions, like tricking an enemy into bombing open a shortcut for you.

The presentation is absolutely sold by the excellent pixel art, finely-animated and plenty detailed to bring out the crumbling masonry and flickering lanterns of a great city in the midst of its fall. The sound design is on point as well, with intensely unnerving tracks right when you reach fog-touched graveyards and silent, subterranean ruins. My only real issue with the game, aside from the occasionally brutal difficulty spikes, is the length. It took me just over 3 hours to beat the game with its “true” ending and something like 96% map completion, which left me aching for more. There’s a new game plus mode that purports to change a few things, but that doesn’t change how small of scope the core experience is. Still, for a fantastic take on the whole cursed city thing, Momodora does the job with flourish and style, challenging you with deadly bosses and leaving plenty to find as you explore.