You ever end up liking something more than you’re supposed to? You know what I mean… laughing at an off-color joke, choosing garbage fast food over something better, or watching all three seasons of Drawn Together. It happened to me while playing BUTCHER, specifically after shotgunning a guard literally in half and wrapping his intestines around a catwalk. Or maybe it was when I started chainsawing an entire room of civilians, scaring the survivors into leaping onto punji sticks rather than face my wrath. Or it could have been when I blew someone’s torso into the ceiling and it got stuck on a meathook, showering the room with blood as it swung back and forth. Honestly I have so many good memories of playing this thing, it’s hard to pick just one to feel bad about. 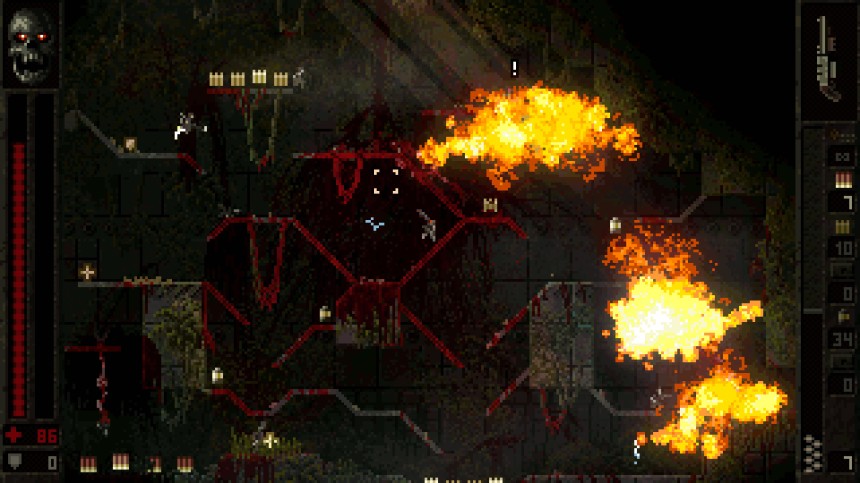 Welcome back to the apocalypse, except this time you’re on the winning side! A sociopathic AI has gone full Skynet, devastating the surface of the Earth and mopping up the remains with custom-built killbots. You happen to be the newest one off the assembly line, charged with taking out the final pockets of human resistance on this ruined world. Operating out of the shell of a destroyed space station, you teleport down to arms factories and jungle encampments to massacre anyone foolish enough to be caught alive, using an array of vicious firearms and explosives. But humanity will not go quietly into that dark night, and they will fight back with just as many guns and bombs and trained attack animals and automated sawblade traps as they can muster.

It’s a grim premise for a game, and I assure you the developers went absolutely pitch-black with the execution. The color palette for the game is incredibly muted except for crimson blood and glowing lava, giving BUTCHER an appropriately charnel house atmosphere. Pixel art obscures much of the detail but your victims scream and gurgle when downed, begging incoherently to be put out of their misery. Limbs and viscera will fly in every level, because encounters are specifically designed to see foes chucked into meat grinders, hung from hooks, crushed by pistons, and devoured by piranhas and panthers. There is no humor to be found here except in the gob-smacking spectacle of painting an entire room red in the blood of your foes, before rolling on to the next massacre.

Assuming you’re as terrible a person as I and haven’t lost your appetite for BUTCHER, the action is a pretty full course. Each of the game’s five areas have four levels each, smallish maps designed to be beaten in a matter of minutes. There’s usually some gimmick to each, like a long elevator ride or outrunning a sawblade or swimming through subterranean tunnels, but the focus is on big bullet brawls with the scraps of humanity. Almost every level has a few arenas where enemies spawn in along with ammo, health, and armor to keep you going in your bloody fugue. You’ll score six weapons as you progress, mostly standard weapons like a shotgun, rifle, flamethrower, and grenade launcher, and always with a room custom-made to show you how much havoc you can wreak with it.

The only limiting factor to BUTCHER is its difficulty, which is a badge the developers wear proudly with the “easiest” difficulty being Hard. That’s no longer entirely true, there’s a proper Easy mode that the game will endlessly ridicule you for choosing, but this all should give you some idea of where the game’s priorities are. I usually avoid games that are hard for the sake of being hard but that’s not the case here, BUTCHER’s challenges are entirely tests of skill and entirely fair, if frustrating at times. Enemies do tons of damage so you can never let your guard down, and victory is a matter of icing foes with the tight keyboard and mouse controls before they can get a shot off, and dodging anything that gets through. Levels have no checkpoints either, which means you might be running through some arenas multiple times if the back half of a level is giving you trouble. 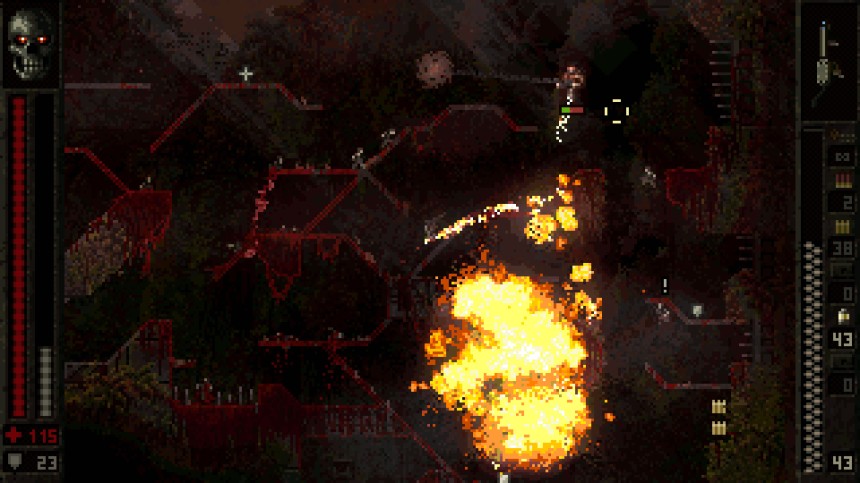 As long as you’re aware of that, and just how absurdly grim the game is, you’re bound to have a blast fighting the bad fight here. BUTCHER revels in its gore and chaos, full of big brawls and levels with plenty of hooks and pits to enhance the horror. There are secret skulls you can hunt if you’re the explorer type, several higher difficulties if you’re the masochistic type, and even a level editor and Steam Workshop support for full sadists. It looks, sounds, and feels the part of an ultra-violent Terminator joint, and if that sounds like your jam then don’t delay in embracing the darkness. I won’t even tell anyone how much you like it.