You ever see something in a game that you just sit and marvel at? Some incredible vista, or wonderfully-detailed boss, or even just a really cool weapon? With Cuphead, that’s going to be every moment of the game. I don’t need to explain to you how incredible the period cartoon art is, that’s why you’re here in the first place. But I can explain how the gameplay stacks up to the unparalleled presentation, and it’s solid, if not a little far on the challenging side. There’s a bit more to the game than that though, and it might color your impressions of this colorful romp. 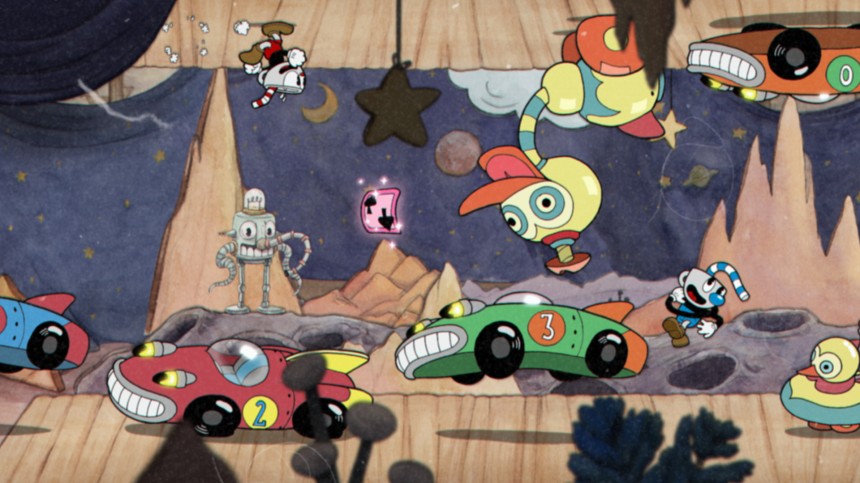 Cuphead and his buddy Mugman came down with a little bout of Pinocchio wanderlust and ended up at a casino owned by Satan himself. They crap out at the dice table and have to sign their souls over, unless they agree to work as infernal debt collectors for ol’ Slick Nick. Turns out there are more than a few folks across the Inkwell Islands that ran afoul of the devil’s dealings, and now the two container-headed kids have to do battle with them to collect on their payments. There’s plenty of ground to cover in this adventure, as well as a few side activities to tackle, but you’re mostly going to be battling big bads on your way back to the Dice King and his hellish boss.

Once the intros and backstories are dispensed with, you’ll be dispensed onto the world map of Inkwell Island. It’s a pretty wide-open place you can scoot around, with characters to speak to, stores to shop at, secrets and shortcuts to uncover, and stages to beat. Most of these are straight boss fights as mentioned previously, but you’ll also have some more traditional platformer stages to tackle for coins, and another kind of challenge that will test your skills at the game’s parrying system. In terms of controls the parrying is about the only thing outside the norm, added atop your 8-way finger gun, your limited super attacks, and a dash that can be used in midair. The controls are plenty tight enough to get you past the obstacles you’ll face, so it’s really down to how much you want to face those obstacles. 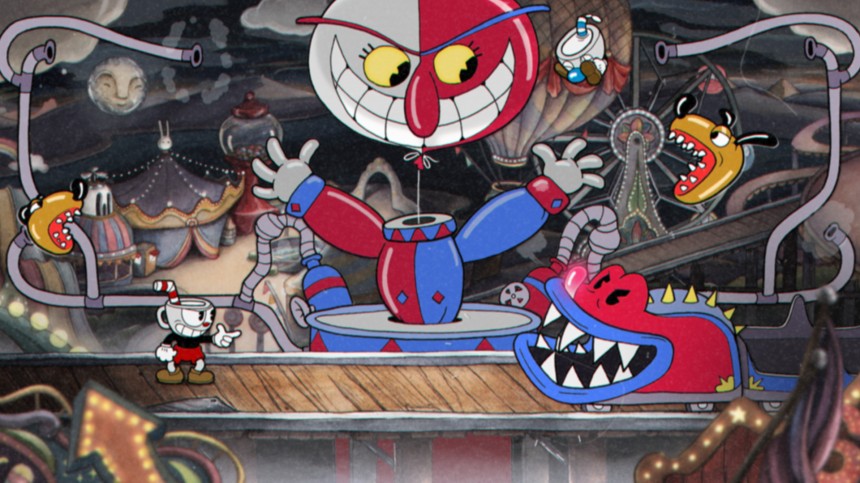 Cuphead is a boss rush game, and let no one tell you different. The main draw of the game is the litany of hand-drawn characters you’ll face off against in multi-stage brawls. Your foes will be anything from boxing frogs and angry vegetables to saucy sirens and raging robots, with surprising attack patterns and magnificent animations to match. Most of these bouts will be on foot, taxing your platforming skills in every way possible, but several switch to a side-scrolling shooter mode where you whittle down bosses in a plucky little airplane. Either way the challenges will be steep and many, as bosses change up their attacks so much the continue screen marks their phases and how far you got through each. Early on they should be pretty manageable, but by the third island you’ll surely start struggling with bosses you have to ascend platforms to keep up with or ones where the screen is so busy it’s hard to keep track of what’s killing you.

So yes, it’s a boss rush game, but there are still some garnishes on this plate of varying quality. The most questionable are surely the run-and-gun stages, which are traditional platformer challenges with basic enemies and a few minibosses to battle through. They’re just as animated and colorful as the bosses, but the actual platforming simply can’t measure up to the boss fights, and in a few stages can get downright aggravating with gimmicks. These levels are necessary to score coins for upgrades, though, so you’ll be punching through at least a few of them. The parrying challenges in contrast are actually pretty clever and useful, and most important of all short, so I consider them a welcome diversion. You can also turn up a fair number of secrets by wandering the world map and talking to the folks hanging around, but make no mistake, most of your time will be spent beating your head against bosses and platforming. 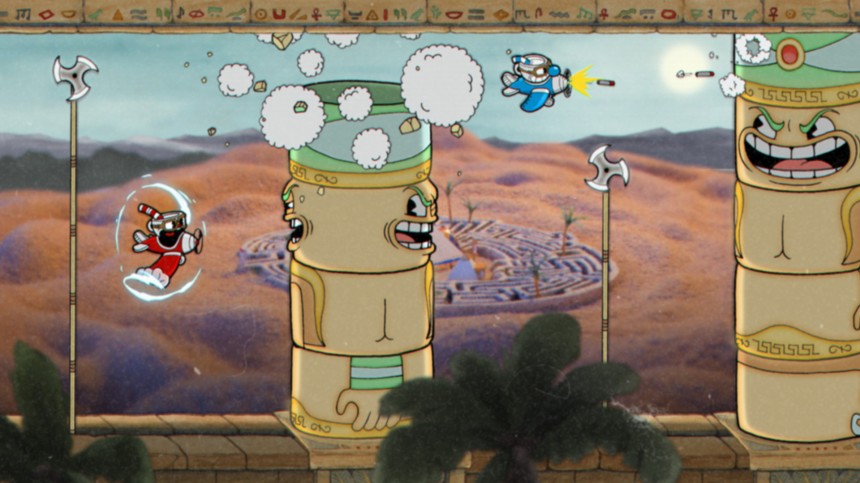 That’s really what’s going to determine how much you enjoy Cuphead, your tolerance for ever-greater challenge. I was pretty much right with the game until the final bosses, the first of which pulls a gimmick from Gunstar Heroes that looks and sounds amazing, but makes beating the fight a huge pain in the ass. And that’s important to note as well, the absolutely incredible presentation goes a long, long way to keep you engaged even while you’re struggling not to break your controller. Overall, Cuphead is a game that really deserves a try because you’re bound to like the look and feel and gameplay for at least a few hours. Even if you have to tap out near the end, it’s still going to be a marvelous little journey through cartoon worlds you might have thought forgotten. For that experience alone I’m all for this one, and hopefully you’ll agree.