When you look at platformers like Cuphead or Hollow Knight, it’s apparent how far platformers have come over the years. No longer constrained to pixel, voxel, or polygonal designs, artists are free to bring the full force of their talents into the worlds of their games. Sundered is a title that can stand tall among these modern giants with its incredible hand-drawn graphics, providing players with a glimpse into a strange and colorful world of all-consuming horrors. It would be a strong title for its presentation alone, but fortunately it brings an innovative mix of designs to the gameplay table as well.

You are Eshe, and you are trapped in a network of caverns wherein matters could hardly get any worse. Compelled by a particularly unpleasant voice in your head, you must venture forth into the ever-shifting depths to uncover just what the hell happened in this place, and what terrible power gave rise to those events. Your ominous buddy is all too happy to narrate the ancient conflict between Valkyries and priests as you poke through the ruins of their tech bases and cathedrals, battling roiling chaos given flesh in the form of swarming beasts. Your search will eventually lead you to the elder shards, crystals of immense power which you must decide to either embrace for the power to escape your subterranean prison, or destroy to break the hold that eldritch forces have on this place.

It’s heady stuff, and every part of the presentation is up to the challenge of carrying it. You can see from screenshots and gifs that your foes are fantastically varied, detailed, and animated, and the many locales you’ll visit in your dark odyssey are just as impressive. But I mean it when I say everything, because the interface is clean and stylish, the item pickups and powers are rich and gratifying, and even the voice acting slaps with an imposing voice growling a dead language in your ear. More importantly, Sundered manages to cultivate an air of mystery and dread in a surprisingly colorful world, full of glowing blue crystals, seething red caverns, and ornate pink spires. Not only is the setting creative with its mix of sci-fi and sacred styles, it gives them a unique look to top them off.

Once you get over how incredible the game looks, you might be wondering what it expects you to do. Sundered is a metroidvania with some fresh features you don’t often see, but the core experience is descending into the caves to battle foes, claim new powers, use them to reach new foes and powers, and defeat the evil that keeps you trapped here. For most of the game this will happen across three large areas, each with their own sub-areas and themes, and while the overall layout is constant the interiors of many sections are randomized every time you die or return to the hub. This can shake up the paths you take to explore new branches or get back to where you were, because there’s no fast travel or even save points here. You’ll always want to be opening up new shortcuts and finding new routes, because you’ll have to re-cover a lot of the same ground as you fill out the map.

I could see that souring some folks on the game, but I was entirely too taken with the combat and movement to care. Your character Eshe starts with a decent pace, double jump, wall jump, and evasive roll, and only gets crazier from there. You can add air dashes, wall running, and grappling to her capabilities (among others), which can give you an insane amount of mobility once you learn how to build and keep your momentum going. Sundered seems to want you to abuse its movement to the fullest, adding mechanics like attacking enemies refreshing your double jump and your dashes recharging almost as fast as you can use them that let creative players scale walls and ascend heights before they would normally be able to.

Another reason to make the most of the movement is that it can keep you ahead of the many, many, many monsters you’ll face in your journey. Aside from bosses there are no set monsters in the game. Instead, they appear in random swarms when the area alarms go off, charging you from off-screen and haranguing you until you dispatch the entire wave or lose them with some fleet-footed maneuvers. Early on they’ll mostly be annoying little critters but in more advanced areas they come like a flood, filling the screen with deadly teeth and tentacles and eruptions that you’ll have to work hard to clear out. Movement plays a big part here but your attacks are nice and meaty, cleaving through foes with ephemeral force and unleashing great gouts of energy with your finishers.

Just about everything in the game drops some kind of gems you can use at the hub to upgrade your stats and unlock new abilities on a sphere grid-esque skill tree. There are some dramatic bonuses to be found here which can get your crit rate up to 50% or make your finishers even more massive. You also get slots for perks that must be found which provide even more game-changing effects, like converting all your health to shields or making enemies way tougher for bigger rewards. The elder shards you’re hunting can also morph your abilities into newer forms but be careful, because what you do with those will determine the fate of your poor heroine. 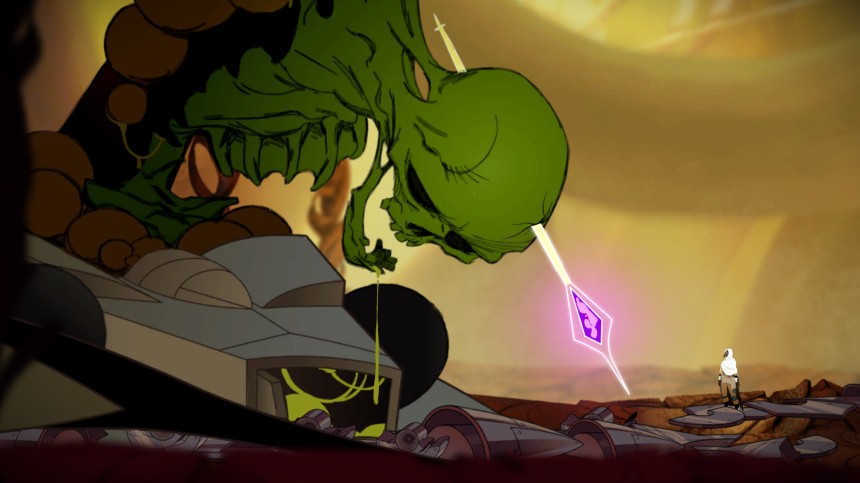 Add to this a wealth of secrets, challenges, and bonuses to find, some of the biggest and coolest-looking bosses I’ve ever seen, and some solid writing on the narrative side, and you’ve got a recipe for a fantastic metroidvania. The only real hurdle here is the pace of the game, if you’re not a fan of forging forth from the hub every death or dealing with monster hordes nipping at your heels. Frankly I was having entirely too much fun parkouring around ancient holy sites and eviscerating tentacled terrors with ghostly claws to care, and even when bosses would frustrate me I’d be ready for round two the very next night. Sundered is something special, a metroidvania that goes its own way on a lot of designs, and props it all up with truly incredible art and animation.