It’s always strange to see a game that sets up the foundations of solid action and then fails to capitalize on it. Seraph certainly ticks all the right boxes to build out something special, between its hands-free aiming and aerial acrobatics and procedural levels and upgrade systems. And I can imagine that, for the first little bit, you’ll get a kick out of hopping and flipping and blasting demons with little effort. But as the levels tick past and the enemies hardly change and the action only becomes more time-consuming, I can see folks wondering if and when the game’s actually going to go somewhere. I know I did.

Seraph awakens in a sort of prison pod, deep in the bowels of some high-tech facility. That’s not the only prison binding her, though… she’s an angel of the heavenly host, but bound to a mortal body and too weak to break free. Her mission is to return to the lands of divinity but there’s the little matter of a horde of demons occupying the many halls between her and freedom. Fortunately there are plenty of guns lying around, and Seraph has plenty of angelic fury to power them with. As she begins ventilating the many spawns of Satan she’ll converse with other survivors and entities within the facility, each with another piece of her checkered past and uncertain future to share.

Narrative is always a focus of mine, so it was doubly disappointing to have an interesting setup for the story that turned out to be squandered. Right away Seraph is bombarded not just with the limitations of her imprisonment, but the bombshell that she herself summoned the demons that have laid waste to the base. Instead of really examining that in any depth, she simply chugs along as an unwavering, hard-assed protagonist who grumbles at dissenters and loudly declares the righteousness of her crusade. It seems every time a potentially interesting character is introduced, like the friend of the body Seraph is inhabiting, that potential is dumpstered in favor of more stern grousing and dismissive proselytizing.

I doubt you’re here for a heavy narrative anyway, but there’s a good chance you’ll find the action just as lacking. Again, Seraph starts out with great promise on this front, offering fluid movement, a double-jump and air dash, and the good sense to shoot at anything close and infernal. The vaunted automatic aiming works quite well and takes a lot of the pressure off controlling your lithe angel, allowing you to focus on dodging attacks and zipping about the room as you whittle down your foes. But past the first few rooms that whittling is going to take awhile, as any weapon besides your starting pistols has very limited ammo, and your pea-shooters are just that unless you pump everything you have into upgrading them.

Even when the combat isn’t just about watching health bars inch downward, there’s simply not enough variety to carry the thing. I’ve seen maybe five different demons in my 90 minutes of running and gunning, and each has only one or maybe two attacks. Levels challenge you to either destroy monster spawners (which means more of the same) or a boss, which is just a larger base monster with additional randomized attacks like “shoots fire” or “shoots purple things”. You’ll find materials scattered across the stages to give yourself passive bonuses or build gear, but weapons are just added to the random drop pool and everything else is just passive bonuses. You can make new powers but I didn’t even get enough junk to try them out. 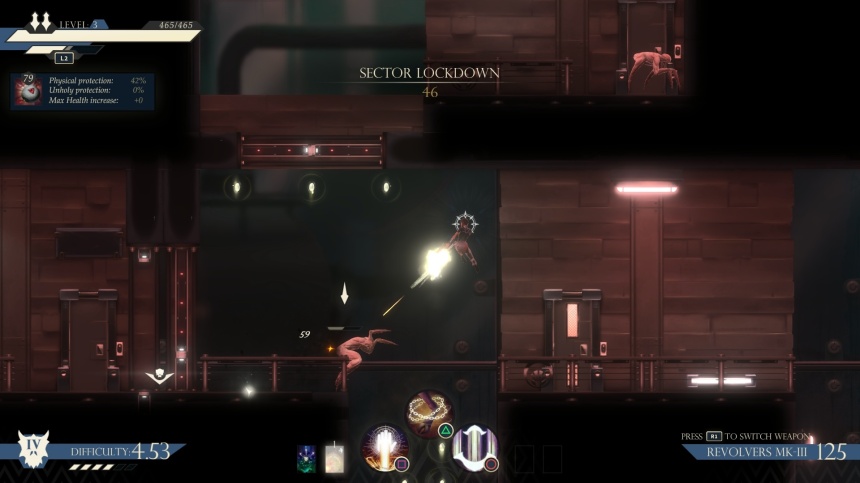 All Seraph really needed was more variety to its gameplay, but even with the fluid movement and shooting I was falling asleep at the controls. You’ll be killing the same monsters over and over and just taking longer to do it the further you go, in levels ironically randomized the same ways. I won’t knock the graphics or sound design, it feels like a very polished game, but one devoid of anything to compel you on to the end. I would love to see a more fully-realized game from these developers, one that does something with the story and mechanics that has a hint of dynamism or progression to it, because Seraph is not that game.