Review: Forward to the Sky

I’ve taken a lot of chances on indie games solely because of their visual style. That’s what led me to try games like Pocket Kingdom and Submerged, a mixture of art and atmosphere that evokes very specific feelings or memories in me. I couldn’t resist giving Forward to the Sky a go for that very reason, looking like something that lands square in between Studio Ghibli and Skies of Arcadia. But I know as well as anyone that it’s always a gamble when you pick up a game based on screenshots, and this one was a bust. As much as it may have nailed an aesthetic that I really appreciate, it certainly didn’t take any inspiration from better platformers or adventures. 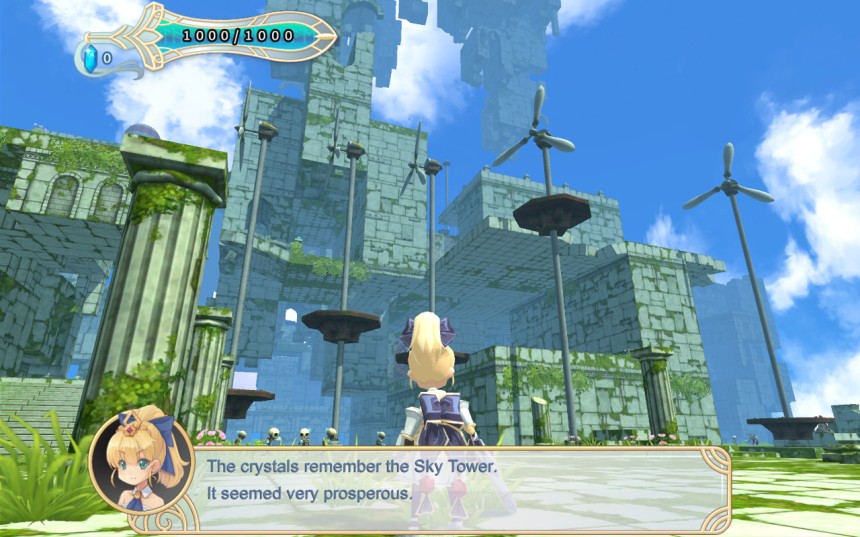 I won’t go too deep on the story here, partly because uncovering it is a major thrust of the progression and partly because there’s not much depth anyway. The sky tower was once an important source of magical crystals for the world, but a none too neighborly witch moved in and cut off the supply for a better part of a century. The tower drifted away under her ownership but now it’s back, and a spry little princess with a poofy dress and a bigass sword is looking to seize the means of production. But not all is as it seems in this airborne edifice, and it becomes clear right from the start that the witch is hiding a greater secret. If the princess can survive the journey up to meet her, she might get a little bit more than she bargained for.

The story is told in very brief still scenes between levels, but there’s a catch. One of the magical properties of the crystals here is recording memories, and as you bash enemies and statues for the precious gems you’ll unlock more of the tale. Functionally, this means you have to collect all 100 crystals in a level to see the full scene and keep up with the story, and while they’re not exactly hidden it means the game is geared way more towards completionists. It’s also worth mentioning there’s a lot of dialog between the princess and the witch during levels, and it assumes you’ve seen the whole story scene leading into that level. This can get a little awkward if you’re not keeping up with your collecting, but not as awkward as the intensely amateur-hour voice acting.

Crystals are squirreled away in statues off the beaten path and in the bodies of rather adorable skeletons that you’ll spar with periodically during levels. Each kind of skeleton pretty much has one attack and goes down in a couple hits, so fighting them is just a matter of clicking in their direction. You have two stiff combos that will dispatch just about anything, and while they’ll get some hits on you from their own stiff attacks, you have so much health you can laugh it off. Outside the combat you’ll be scaling a big stone tower, or at least the fragments of it. Levels are really collections of rooms and platforms floating in the big blue sky, and while they might look vast and complex there’s really just one main path through each level. Take a peek at obvious platforms and you should find all the statues, and don’t bother exploring little ledges or archways because they’re just for show.

It’ll take you about 15-20 minutes to get through each level, and there are six to tackle. They tend to have different gimmicks like spinning fans or gusting winds but every single mechanic and hazard feels either poorly-implemented or janky to work with. There are mystical breezes that push you around but the glow that marks them is far too subtle, and the aforementioned fans have finicky hitboxes. More important than any of this, though is that levels are just boring. There’s not enough going on, not enough to see, and so little to the plot and combat that Forward to the Sky really lacks any kind of hook whatsoever. I could easily beat this in two hours but when I realized I was dozing off during fights in the fourth level, I knew it was time to stop.