I’ll be honest, I’ve been avoiding this one. I picked it up around its original release because I’m a pretty big fan of the developer’s previous game, Spaceport Hope. The pitch is good, the game looks expansive, and so I had high hopes for digging deep into External Visions. But it didn’t take me long to start running into roadblocks to my enjoyment, more and more until I decided to put the game down for awhile. Maybe I wasn’t in the mood for an off-beat metroidvania, I thought. I’ve tried to get back into it several times since then, and each time has only solidified what I already knew… It’s not me, game, it’s you. 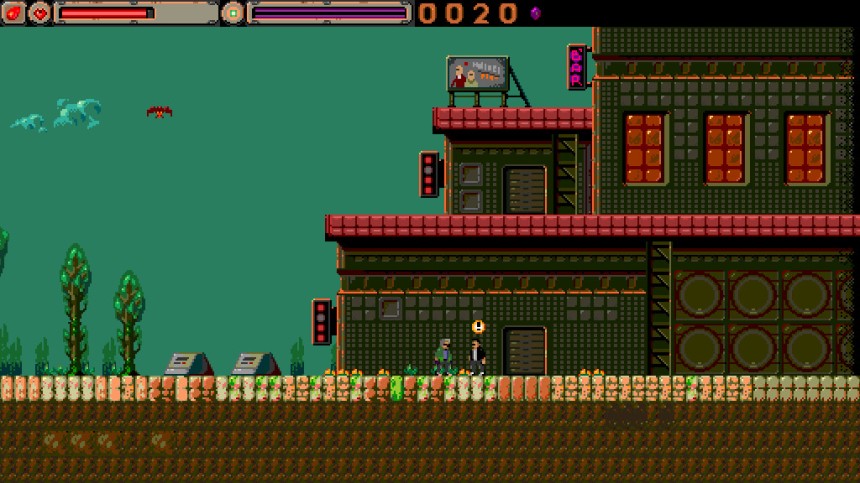 External Visions ostensibly takes place in the mind of a regular everyman struggling with depression. His battle has turned his mental landscape into an actual battlefield, rife with grotesque monsters and oppressive entities. If he is to have any chance of escaping his pain, you’ll need to guide him through the vast halls and labyrinths to do battle with the beasts that inhabit them. You’ll meet some helpful folks along the way, presumably positive parts of his psyche or memories of people that have survived the darkness. Ultimately you’ll be questing for a whole little society in here, which only makes the stakes higher.

Again, it’s a good pitch for a game, but the mind is forever a perilous place to place your game. Surrealism and symbolism aren’t as simple as putting cracks or mold on your floor tiles, after all. Every part of the game’s design needs to be informed by the decision to set it in an unreal place, making sure to consider the meaning of every enemy placement, color palette, and sidequest. To put it bluntly, External Visions doesn’t do that. You know this is all inside your character’s mind because people tell you, not because there’s any clear symbolism that reveals his traumas and coping mechanisms. There’s also no significant character development OUTSIDE your character’s mind, which gives less context and less reason to care about whatever happens INSIDE it. 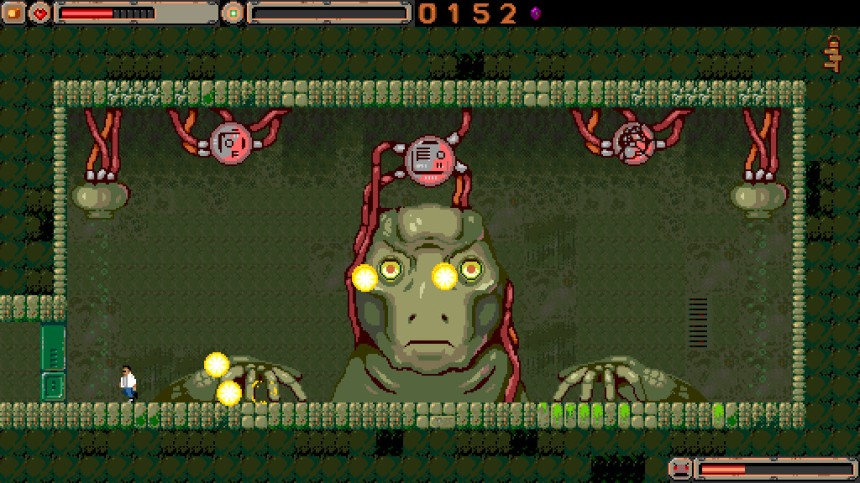 That wasn’t even what hung me up on the game, though. External Visions plays like a solid enough metroidvania, giving you a vast map of interconnected rooms to explore and items to find among them. However, your primary means of overcoming obstacles is not in the items you collect, but in weapons you essentially borrow. There are terminals all over the game with numbers 1, 2, and 3 on them. Each is a ranged weapon with a special purpose, like 3 which fires yellow blasts that solidify into blocks you can jump on. You must find a terminal to use that weapon, and you can only use one at a time. I know what you’re thinking, and yes, those terminals are not terribly numerous. So to solve many of the puzzles in the game, you’re going to be backtracking just to pick up the weapon you’re supposed to have at the moment.

It’s an absolutely inexplicable design decision, and one that kills the pacing of the game. I’ve absolutely had moments where I had a choice between two weapons, picked one, and progressed for 5 or 10 minutes just to reach a roadblock I should have picked the other for. It’s hardly the only issue with the game, either. The difficulty is all over the place, starting out even enough for the first hour or two and then spiraling out of control from the library. Controller support is limited and may require manual bindings to get it working, and some of the choices for sound effects can seriously grate after awhile. These are mostly small complaints but the add to the big ones in a way that’s hard to ignore.

I know a lot of heart went into making this game, which is why I hate having to describe it in these terms. But there’s no getting around it, External Visions doesn’t come together in a satisfying way. The core themes are not as fleshed out as they need to be, and the core gameplay has serious deficiencies that make it hard to stick with. It makes it that much harder to see decent art direction and level design go into such a flawed game, but no matter how much I want to enjoy it, I can’t. I hope this title has been a learning experience for team BitClub, and that their next game is every bit the success I wanted this one to be.