It’s hard for any game to cover all the bases, especially an indie game. You often see titles focused heavily on combat, or exploration, or story, because mixing them all up is both expensive and hard to do without muddling any of them. That’s why I give Super Cloudbuilt so much credit, because it goes the extra mile to make all of these elements shine in what’s ostensibly a speedrunning game. It’s not going to match titles built around these features but it doesn’t need to, considering how ridiculously fun it is to scramble all over the broken worlds here.

I won’t spoil the plot of the game but the thrust will become apparent almost immediately. It’s a trope I don’t really care for but I’ll admit it’s a decent one to build the game around, giving justification to the open flow of level progression. From a hub area you’ll access several wings of levels, each following a theme like exploration or combat. Beating one level grants access to the next level in that wing, and eventually you’ll be presented with different conclusions to the overarching story depending on which wing you finish. There’s even a few diversions and secrets to check out here, giving the interstitial area some welcome depth.

Most of your time will be spent navigating the game’s levels, and it’s here that you’re presented with the freedom that makes Super Cloudbuilt so enthralling. All you need to do is reach the door at the end of the level, and that’s a simple matter of hopping across broken clusters of walls and floors and moving through great floating assemblies of chambers and traps. A lot of these walls and gaps are too large to tackle on your own, which is why you come equipped with a frightfully powerful booster for jetting across floors and up walls, or just firing off an extra mid-air jump. You’ll also have an upgradeable gun for warding off homicidal robots, but once you see just what you can do with your booster, you might not want to stop long enough to fight. 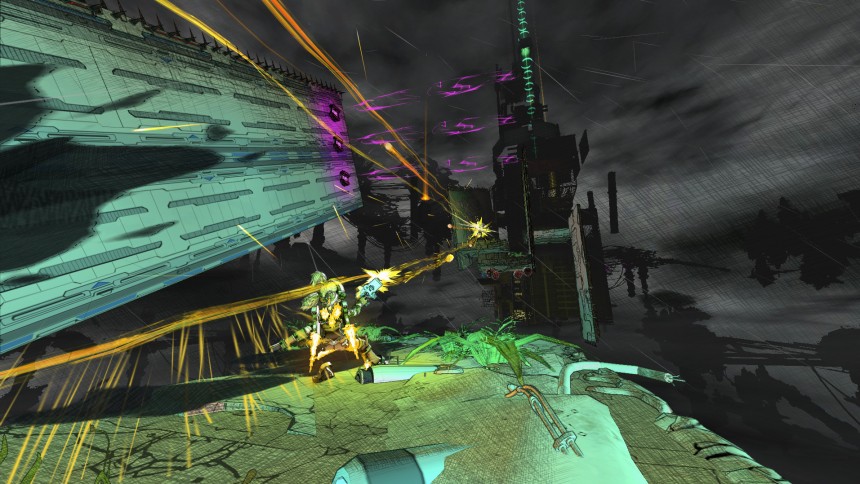 A lot of platformers get in trouble for being too slow or stiff to really enjoy. Super Cloudbuilt feels like it was designed specifically to rub those failings in, because you can get yourself up to absurd speeds here. Your base movement speed is already fleet enough that you might find yourself dashing off of ledges, but once you get the booster involved you can tear around levels in an instant. Parkour features heavily here, with your heroine able to wallrun and zip straight up surfaces, and clever use of your booster will help you do this safely and swiftly. Many sections of levels are just walls hanging in space, challenging you to wallrun and jump between floating edifices to reach safety.

You can absolutely speedrun every level, weaving past enemies and obstacles like Mercury himself, but for the more contemplative gamers there’s plenty to find as well. At the end of each level are a number of lockers bearing goodies and gear that you access by completing certain challenges. Two of them are for finding cards hidden around the place, five in all. The others are for revisiting levels after beating them and accepting special challenges, like beating the level without getting hit, or without using your boosters. And even beyond that, there’s an entire wing of levels for peaceful exploration, ascending towers in the sky and traversing floating islands mainly for the scenery.

The crosshatched art style of the game serves it well, drawing stark contrasts between platforms and foes and giving you bright colors to augur towards. The music also deserves very special attention as a collection of intense, atmospheric beats to commit your high-speed maneuvers to. It really helps seal the deal on just how liberating and energetic this game is, forming a total package that gives you loads of challenges and loads more ways to overcome them. It might take you a little bit to get used to the controls and rules of momentum, but the first time you jet past a cluster of deadly traps in seconds and take in what you’ve just accomplished, you’ll surely see how worthwhile it all was.