How badly do you need your games to innovate? I hold innovation as a very important value for games, but it’s not a deal-breaker. Some of my favorite games are just extremely solid retreads of familiar ground, assembled in a way that’s maybe more inviting or involving than what they were inspired by. Alwa’s Awakening lives in that neighborhood, a retro callback to the days of Castlevania II and its open, adventurous ilk. It’s full of enemies and powers and roadblocks you’ve doubtless seen before, but there’s a comfortable familiarity in working your way through this one, even if you might get a little lost along the way. 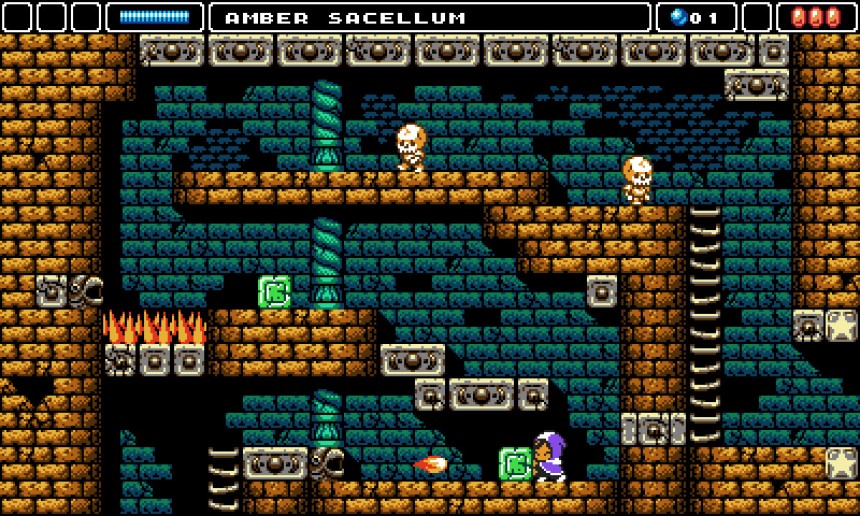 Zoe finds herself transported to the land of Alwa, a mystical place where skeletons and eyebats and all manner of nasties are running rampant. She knows she has to save the world, what with her being a hero and all, but not exactly how to go about it. Fortunately, Alwa is populated by a terribly helpful cast of characters that will explain where she needs to go and what powers she’ll need to master to see her quest through. It’s still up to her to find her way there, of course, and figure out how to do away with the guardians standing in her path. But with loads of magical orbs and artifacts scattered around, there’s a good chance she’ll overcome whatever gets thrown in her way.

There really is a mess of NPCs all over the world, which is nice because Alwa’s Awakening really does just chuck you straight in without much direction. The world is fairly open but funnels you toward certain locations, and those NPCs are pretty good about leading you around, but there are going to be times when you’re not sure where to go and you end up wandering around running into dead ends because you lack the powers to get past them. I’m only mentioning this up-front because it’s one of the chief complaints about the game in general, and I’ve felt it too. There’s one particular part of the map I returned to like three times as I gained new powers, and it still didn’t do me any good. 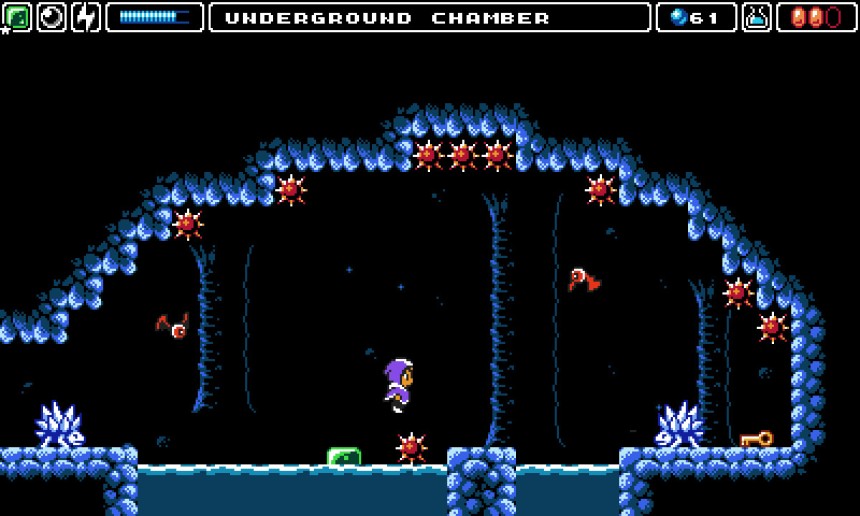 As long as you don’t mind some hunting and pecking, though, everything else about this one is rock solid. As an homage to the 8-bit adventures of yore, Zoe gets a nice, floaty jump and tight controls overall to overcome the platforming challenges ahead. Your main power-ups are magic gems that let you create blocks or bubbles to help you get past obstacles. They’re far from unique offerings but I’d be lying if I said I didn’t enjoy experimenting with them to get into all sorts of spots. You can also find optional items that make exploring easier, as well as 99 magic orbs that improve your attack as you reach specific quotas of them. You’ll need to get creative with your powers and hunt for side paths and walk-through walls to find much of them, but that’s the fun of any metroidvania if you ask me.

Combat isn’t much of a consideration, as you dispatch most foes in one or two swings of your stubby little cane. There aren’t even that many monsters to start with, which is good because you only take three hits before getting chucked back to the last save point. In some games that would become a source of endless frustration, but Alwa’s Awakening feels carefully balanced around that limitation. You might also find yourself missing actual range on your cane attack, but if you can hold out until the midpoint of the game you’ll get a very useful firebolt spell to work with.

Whatever flaws Alwa’s Awakening has feel very minor in light of its solid design. It’s not remarkable or exceptional, mind you, it’s just another quality retro title with perhaps a bit more polish and balance than most. The art is spot on with it’s nice, chunky pixels, and the sound design at least excels with some very memorable tracks and effects. Blasting through the main quest will take around three hours, but tack another two or three hours onto that for full completion if you’re the type. Really I just hope you’re the type to take a chance on a fine little adventure with very little holding it back, because Alwa’s Awakening really fits the bill for a classic metroidvania.