There are a million considerations for making a great platformer, but I always point to the movement as chief among them. Just like shooting in an FPS and economics in a management sim, the movement in a platformer is absolutely core to its appeal. It seems like the folks making Aura of Worlds get that, because they’ve rounded up all kinds of fun movement mechanics for their game and stitched them together with some pretty tight controls. This attention to detail makes traversing their deadly dungeons a right romp, even if at times the freedom of movement seems a little at odds with the rest. 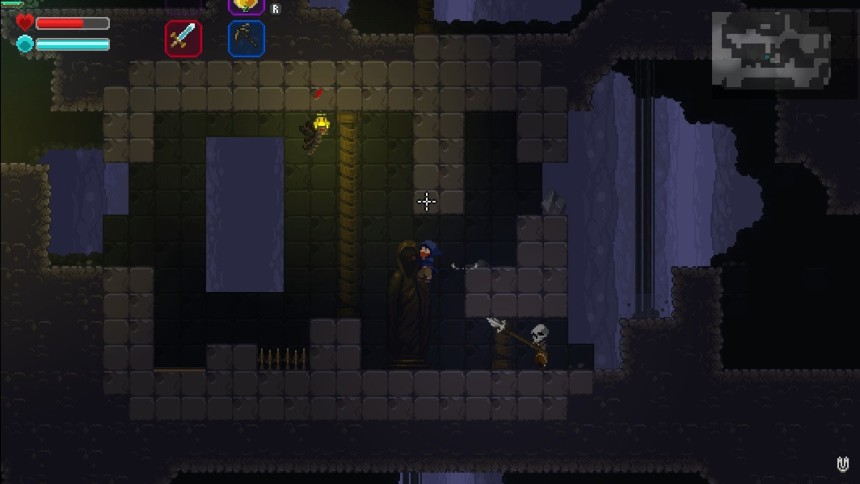 I’m not actually sure if Aura of Worlds is going to have a story to its spelunking, but it might not be all that important here. Right now you can take your little hooded adventurer into three different subterranean realms, covering caves, overgrowth, and temples. More are planned for the future but each of these areas has three or four randomized levels to get through, and then a boss to beat before moving on. There’s plenty of treasure to be found in the many chests and crates and vases along the way, but you’ll also run afoul of all kinds of skeletons and slimes and magical beings that would really prefer you dead.

If this sounds a bit Spelunky to you, you’re not alone. Levels even feel laid out in similar ways, with floors to weave your way down through to the exit at the bottom. There are spike traps and boulder traps, water to swim through and lava to burn in, ladders and vines to scale, and even more familiar foes like bats and snakes. The big difference is that the movement and combat is much more Terraria playing out inside Spelunky levels. Your little dude has some huge jumps, and can get magical abilities that grant additional jumps, dashes, or teleports. You can get a wonderfully-implemented grappling hook with incredible range and swinging mechanics, or anti-gravity pads, or just blow chunks of the level up with grenades. 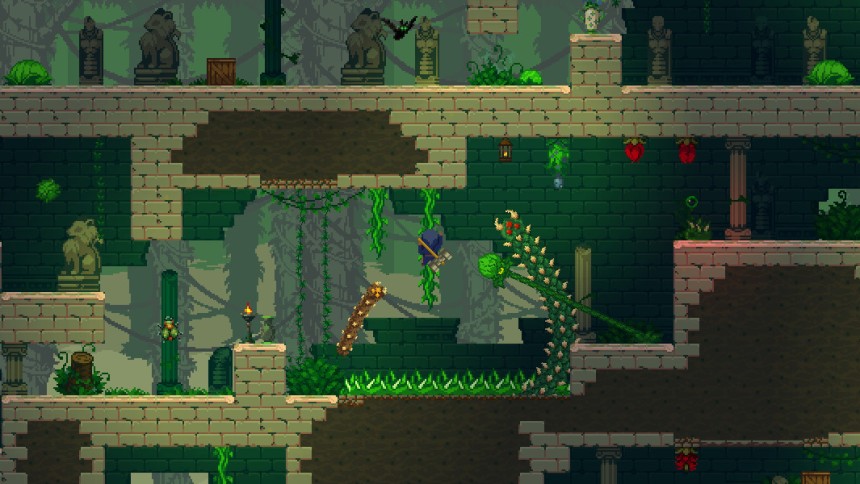 This goes for the combat as well, swinging swords and jabbing spears to knock numbers out of foes before they knock all of your numbers out. You can get really creative here though, picking up just about anything in the game world to throw or swing, and triggering some neat interactions by breaking lanterns to set enemies on fire or luring them onto spike traps. The whole game is set up to allow you the freedom to approach challenges in any way you want, which is a fine goal but right now doesn’t quite mesh with the incredible freedom of movement you have. Even on hard there’s not much reason to even engage with enemies, sprinting or blinking past and snatching up treasure on the way to the exit. In Spelunky you didn’t have the speed or mobility to ignore foes (at least until late in the game), but here you essentially start with the option of straight speedrunning levels, without a whole lot of reason to stop and explore. And sometimes the levels have you outrunning a threat like poison gas, which makes exploration even less of a consideration.

Part of that is because the equipment and rune systems still need to be fleshed out to provide something to search for (and something to buy with the gold you accrue), and part of this is because meta-progression is more focused on how far you get than what you do along the way. You’ll gain permanent experience when you die, and leveling up grants coins to spend on unlocking new gear, new starting traits for runs, or shortcuts to later areas. It’s a fun little romp, particularly for how fun it is to move around in and outwit foes, but it still feels a bit thin without more to really explore for or challenge yourself with. Aura of Worlds gets the movement right, the most important part of platforming, and now it just needs a little more to do with it to become truly great.