Seems like every couple of months I have to give the Dark Souls influence spiel to explain why I’m referencing that ubiquitous series yet again. Not everything is Dark Souls, but there are always new games springing up that are heavily influenced by the environmental storytelling and deliberate combat. Unworthy is another recent entry in the platformer genre that wears its influences on its sleeve, this time in a way that makes it almost impossible to ignore. But it does bring a bit of innovation to the table in the form of enemies, powers, and a faster-paced take on side-scrolling combat that not everyone is going to have the patience for. 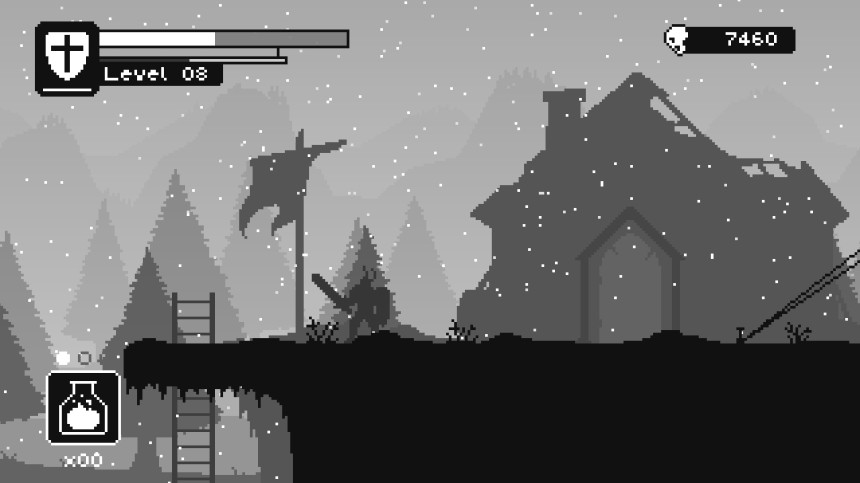 Surprise, surprise, you’re dead. But death is little more than an inconvenience for a determined protagonist, and you spend your tutorial period escaping the afterlife so you can rise from your grave. You emerge into a grim land of graveyards and ruins, society all but wiped out by sin and filth. Only by embracing your sins and atoning for them will you claim the power needed to beat back the foul beasts of the many caverns and towers in your path to salvation. Fragments of a great bell lie waiting for a hero to collect them, and in doing so you may find escape from this hellish place.

Much like that which inspired it, Unworthy does very little explaining of the plot in favor of assembling a world where the stakes and threats are apparent. Dark Souls at least had plenty of chatty NPCs to fill in the gaps but you’re flying solo for the vast majority of this one, so don’t expect much narrative besides what you get from the dark fantasy backdrops and wild proselytizing of the few unhinged bystanders you meet. Despite the chunky, monochromatic presentation the environments and enemies are extremely evocative, so even if you’re not getting all the plot holes filled it’s not hard to feel and appreciate what the game is going for. 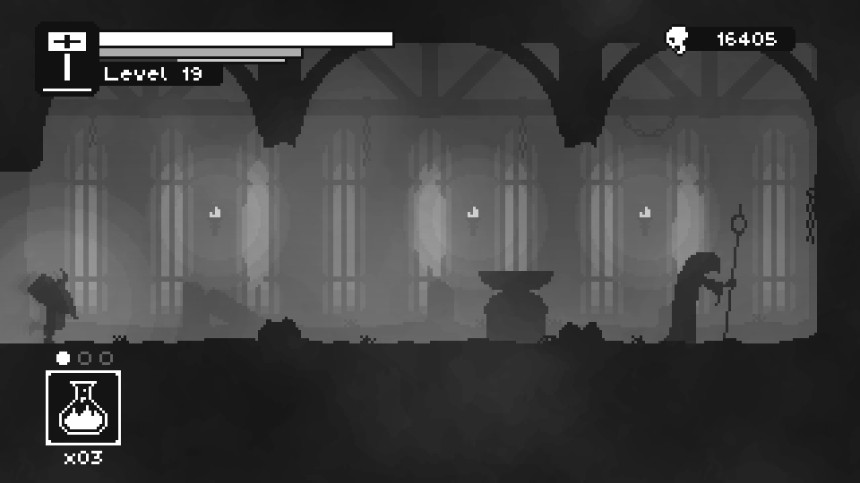 Feel is going to be important to the combat too, especially once the game really starts testing your understanding of it. Unworthy prides itself on being a platformer without jumping, instead giving you a dodge roll on that all-important A button. Don’t worry about navigating the sprawling world, as you’ll unlock at least one very creative mobility power to help you get to those hard to reach places. Instead, worry about that combat that just comes down to timing your swings and rolls around enemies. While Dark Souls has the advantage of combat in three dimensions with a host of viable builds, Unworthy attempts to pose the same challenge with one-dimensional battles and perhaps half a dozen weapons. With no jumping or physical depth, there’s only so much you can do with your sword or hammer, and even your shield is just a free hit on a cooldown instead of something you actively use.

It works, of course, because everything in the game is designed with your limitations in mind. But it means there’s essentially one way to face every challenge in the game. There is one way to dodge every boss attack, even if it does involve cool gimmicks like your hammer impacts or magic arrows. If you don’t like or can’t come to grips with the combat at any point, that’s pretty much the end of you because your options are extremely limited. All the other Dark Souls systems are here, from consumables to stamina management to enemies respawning when you save to collecting sins to upgrade yourself and so on. It’s just lacking the depth of combat, which ends up being a huge part of the experience. 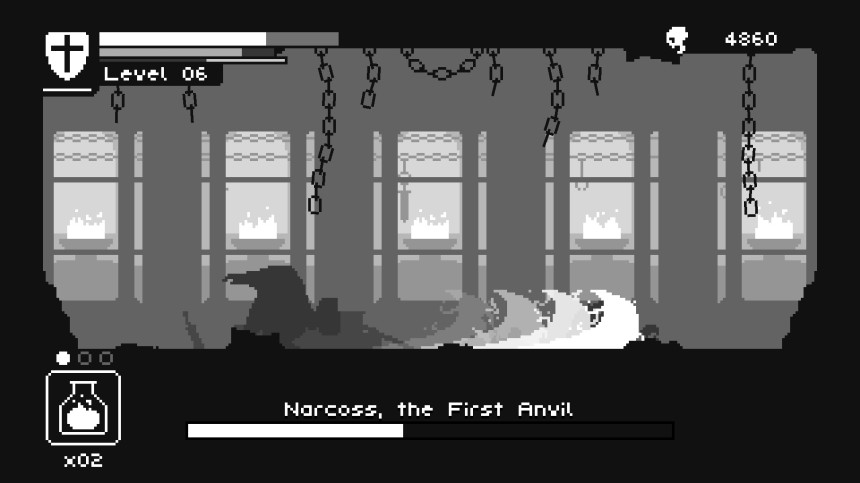 I know I’m belaboring the point, but I do so because Unworthy is not going to appeal to everyone who likes platformers and Dark Souls despite appearances. The exploration is fun and the combat is challenging, but you absolutely have to play it its way or you are sure to get frustrated. There’s an archer boss you’ll meet in the first 2-3 hours of this 7- or 8-hour romp that requires you to be 100% on-point with everything. You have to time your swings, manage your stamina, predict counters, roll perfectly, and use one of your weapon gimmicks to avoid an instant-kill attack. It’s intensely frustrating until you fully learn how to time everything and execute the battle the correct way, and while I was happy to get past it and continue my journey, it just wasn’t the same as beating a tough boss in similar games. You won’t get the sense of building something to overcome a challenge here, you’re more going through the challenging motions, and if that’s enough for you then you’ll have hours of grim adventuring to plow through here.