The 90s were a hell of a time for gaming in general, but the full-motion video wave were a point of particular excess. There was a point where FMV games were considered the way forward, drawing names like Bruce Willis and Tim Curry to lend their talents to optimistic blockbusters. Most FMV games, however, ran afoul of the limits inherent in mixing recorded footage with dynamic gameplay, and mostly fell away over time. Bad Mojo was such a game, a grotesque adventure buoyed by cheesy acting and special effects to produce a cult classic unlike any other. It’s a tough game to play in many respects, but deserves to be seen if only for how singular it is in the gaming world. 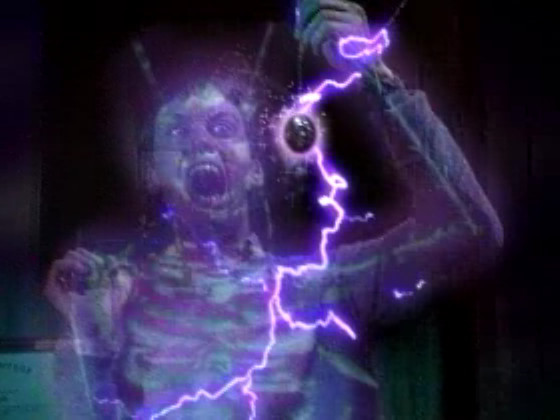 Roger Simms is a shifty entomologist living in possibly the worst apartment block in San Francisco. His prospects are looking up, however, with a suitcase full of cash and tickets to Tijuana ready to pave his way. All he has to do is get his asshole landlord Eddie off his back, but a new wrinkle appears in his plan in the form of a mysterious amulet from his deceased mother. The trinket turns Roger into a cockroach, the object of his gruesome studies, and leads him via visions on a quest around his squalid home. He’s got some important lessons ahead of him, as well as some unexpected and (let’s be honest) fairly contrived discoveries to make, before deciding the fate of himself and his family forever.

Bad Mojo would probably be lost to the bargain bin of history if not for its FMV cutscenes, a manic expression of 90s grunge and intense cheese that forms the backdrop of the game. Roger is every bit a community theater Jim Carrey, contorting his lanky frame into cartoonish deliveries of overwrought lines. Eddie is the quintessential gross asshole landlord, grimy undershirt and cigar and all, though he does get some texture to his character. Together with the specter of Roger’s mom, they face off in spats over rent, complaints about living conditions, and melodramatic nightmares of the past. If you’re here for the FMV prepare for low-rent spectacle, and behold as they devour every inch of scenery in their short performances.

The cutscenes help set the gross 90s tone for the game, but it’s the gameplay that takes it far, far beyond. I will tell you right now, Bad Mojo is a downright disgusting game. There are absolutely stomach-turning scenes of filth, squalor, and rot to be found here, and as a playable cockroach you’ll be skittering across all of it. I have no compunctions about spoiling one of the most iconic scenes of the game (it’s on the store page anyway), where you drop a box of straight razors on a rat and have to scurry past its twitching corpse. Death and decay is everywhere, and only grows more disturbing as you get further insight into Roger’s history. That really caps the grimy, hopeless feel of the game: You’re not playing as a hero, or even sympathetic protagonist. The few characters there are in this game are almost all assholes or monsters or both, leaving you no one to root for and no emotional impetus to see their stories through.

It’s only perverse curiosity and morbid fascination that will get you through this three-hour journey, which is rare in the modern era of identifiable heroes and villains. In terms of gameplay, all you have to do for most of the game is get from point A to point B. As a roach you scuttle across the floors, walls, ceilings, pipes, drains, plates, tools, and so on find your goal. Each room has an objective, given to you via obvious riddle in a vision from your mother. There aren’t many puzzles in the game and no inventory at all, so you mostly have to get to points of interest and push a few razors or spoons around. The hard part is figuring out where you can go, since this is a pre-rendered adventure game and it’s nearly impossible to tell what’s walkable, what’s an entrance, and what’s deadly. You’ll have to do a lot of experimenting just to find your way around, and late in the game you can get hopelessly lost if you’re not keeping track of how all the rooms and furniture connect. I got stumped for a good long while because I didn’t realize I could crawl on the underside of a bed, just by running over to the edge and going further.

You’re almost certainly going to need a walkthrough at some point, for some of the stranger puzzles or pathways or just to figure out the ending. There are four possible conclusions to this macabre tale, and the best one requires a lot of extra exploring and some un-intuitive timed actions to get. It’s worth it for the absolutely ridiculous coda it puts on the game, which is a pretty good summation of Bad Mojo in general. It’s tough to play, vile in parts, and worth your time for the absolute spectacle it makes of itself. That’s not going to sell it to everyone, and it shouldn’t, but those who miss the gross excesses of the 90s or just want an adventure very, very far off the beaten path should definitely give this one a try.