The original One Finger Death Punch was an incredible treat when I finally discovered it. For someone as far from fighting game greatness as I am, it allowed me to string together incredible cinematic combos and stick figure massacres with just the hectic presses of two buttons. The sequel remembers this, and knows exactly how to follow such a magnificent performance: More of everything. One Finger Death Punch 2 builds primarily on the spectacle and details of fights, but also stacks several new systems and game modes on top of the classic adventure. If you needed more reasons to keep crushing armies of stick people, you will find plenty here. 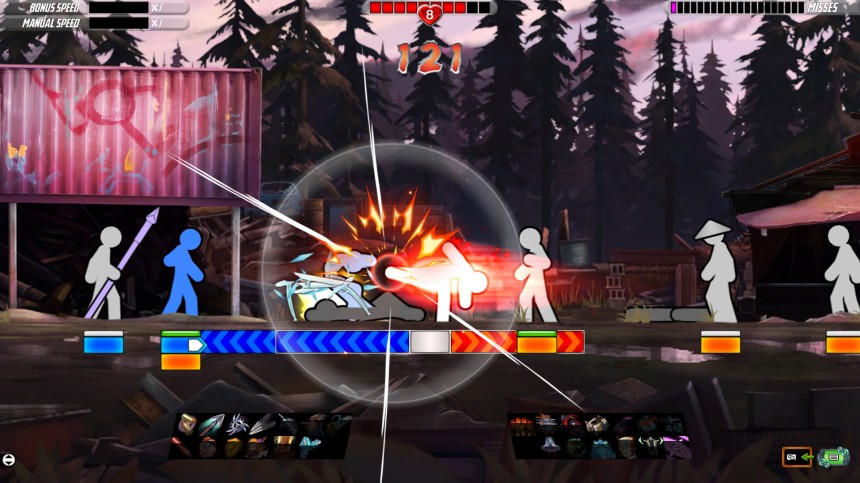 I can’t remember if the first OFDP had a story, but it hardly mattered if it did. Every battle places your stick person at the center of a horde of stick people, with only two buttons to guide you through the melee. You can attack right and left using those buttons, and if you press them when someone is within your (clearly marked) range, you destroy them with your stick fu. You’re not just standing still, though, as your person dashes in to deliver their crushing blows, so you need to consider the spacing of your enemies when deciding to attack right and left. Some enemies require multiple hits to beat, or engage you in special duels, and so on, but every stage ends when the required number of foes lie dead at your feet.

Believe it or not, this is a huge oversimplification of the game on a number of levels. Even though combat is just two buttons, it’s affected by a huge number of factors beyond even the different enemies that approach. Some fighters carry weapons that change their attack range, and can be claimed and used by you once wrenched from their cold, dead hands. In OFDP 2 these include all kinds of martial arts weapons, swords, clubs, polearms, laser swords, umbrellas, shuriken, bows, and even guns of all types. Foes use many more ranged weapons now, and are color-coded by your response such as blocking, dodging, or reflecting attacks into other enemies. As you play you also earn skill points to spend on 26 different skills, which unleash special combos, enhance weapons, or affect enemy types that appear. 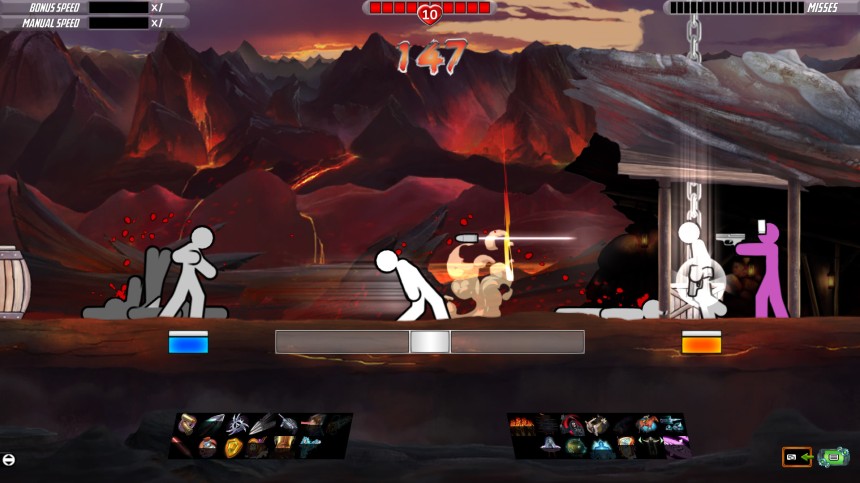 On top of all that, the dynamic speed system is back but with two parts now. The game will speed up or down dynamically depending on your performances, but you can also directly control how fast it goes with settings and skills. OFDP 2 feels like it starts in a more challenging place than the first, and ramps up quicker, but will still remain in your comfort zone thanks to the speed shifting. There are tricky new battle types as well, like ones where you have to take out specific foes with ranged attacks, and classic ones like the multi-battles (fighting the same battle repeatedly at greater speeds) feel tougher than before. It’s not a bad approach to a sequel by any means, but even veterans of the first game should be prepared for some adjusting.

Once you get adjusted, though, you’ll have no reason to ever stop. The sprawling maps of the adventure mode are back, this time divided into regions with tons of paths and challenges to explore. There’s a new challenge tower mode which is a twist on endless where you advance up several towers as you persist through different groups of foes. Then there’s the gauntlet, a strategic sort of level progression where you choose a path through stages based on their difficulty and how much health you have left. You can even fire up a co-op mode if your friends come over for some stick death, or link it to Twitch if you stream so your friends can become named enemies in the game. And that stupid cat mode is back as well, if you like fighting battles half-blind, but I guess the game would feel a bit hollow without it. 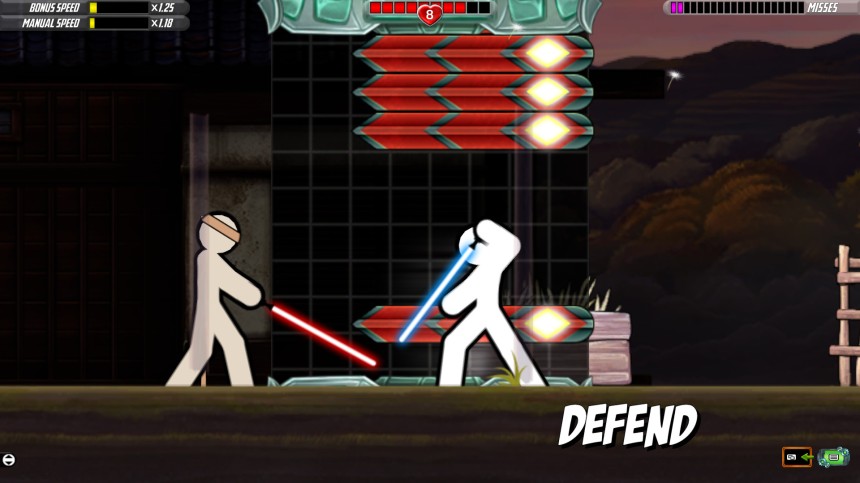 Most importantly, One Finger Death Punch 2 looks and feels even better than the first one. A lot of love has gone into the animations and backgrounds, and it really shows. The game is silky smooth compared to the more stop-motion animations of the first, and there are dozens more special attacks and executions with every move and skill and weapon imaginable. If you thought the first game was chaos, prepare for demon semis to crush your foes as you whirlwind kick your way to a chainsaw after eye-beaming through a boss. The game is absolutely lush to look at, and has a slamming, almost schizophrenic soundtrack full of memorable tracks. Everything you loved about the first game is here, stacked atop twice as much stuff to love, and if you somehow missed out on stick murder before then you’re going to see why you love it now.